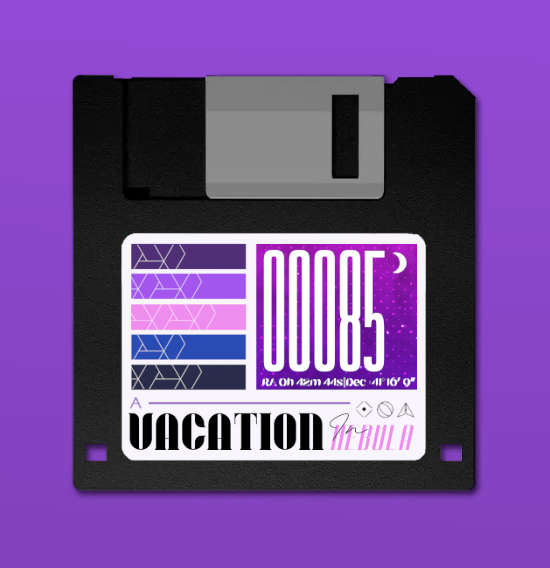 Hello and welcome to Nebula Resort, enjoy your stay!
What? Yeah, heartwarming is the name of the game, despite the cold palette hue used it's really a short game (took me 15 minutes to complete, in any case there is a save point in the map at the centre of the Nebula Resort) with a positive message.

Without wasting time in pointless introductions, because this game is going will do the same, I'll tell you that there is almost no story: you start playing as a character, your alter ego, and she has to find seven suns. Each one when collected will express some inspiring, motivational and positive thoughs. 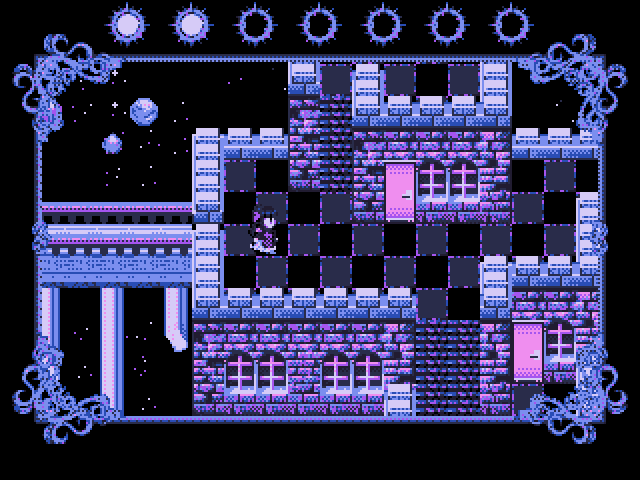 But besides something to read, there is also something to see: despite the shortness of the game and the simple palette used there are some nice maps and locations, and even some inhabitants of this strange and surreal but peaceful location. I also liked a lot some visual choices like the use of the curtains between scenes and the frame that... frames the visual! It's all very stylish and original and I found it extremely charming!
Try it and see, nothing particularly complex, still it's pleasant and this game, I won't deny it, surprised me.

Then... bam, puzzles! Ok, there are a couple of short and easy puzzles that have to be solved to unlock some doors, and admit that the second gave me some problems until I figured out how it had to be solved! I admit that the dark environment (it's in the mines) and the restricted number of colors made somewhat harder to understand at first where I could walk and where I could not (also there are some places where you CAN walk but you CANNOT move the cogs you need!), but then I was able to complete it on my third try (better late than never!).

What else? Oh not much, anyway I told you, it's a short game... so let's read the final verdict! 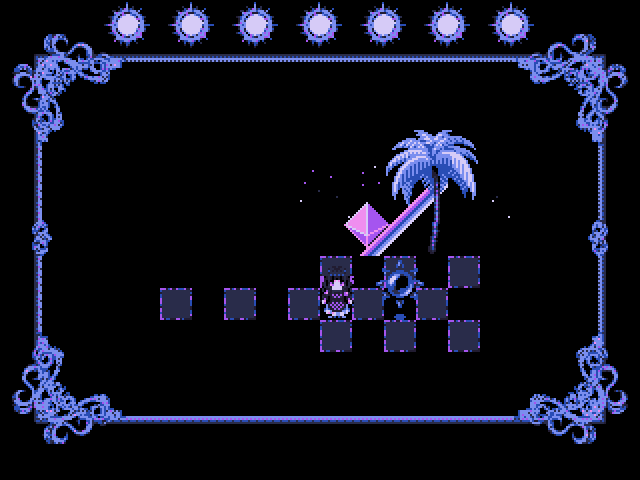 Oh, I tried to use that save point, then I remembered that this is NOT a Two Strangers spin-off!


The Final Verdict
Uhm. Eh... I am sorry, I totally forgot to mention that this game was made for a contest! The 1.44 Floppy Disc Drive event! Nice, I remember that the first rpgmaker game I played was made in Rm2k3 too but was 200 Mb and took almost a day to download (here internet was pretty bad in 2008)! Anyway despite the little size and the short time this entry was good and nothing less. So I am obviously taking in account the restrictions of the event! It's all good even if the "curtain closing/reopening" animation may some players annoy after a while... maybe I'd have limited to some sections anyway I had no problem with it, I just say that some mayers may dislike this particular aspect.

I expected a simple relaxing walk around the Nebula Resort, but I got more, I got also nice maps and puzzles and a lot of purple! Cool! A good entry, simple and short, but well done, stylish, inspired and charming. Very much. I have a 4/5 to give here, so guys, go and have a walk at the Nebula Resort. Now!

Close
05/03/2021 10:32 PM
Thank you so much for the review addict! Really makes me happy to see people enjoying this, especially since I was worried it was a little too plain and unexciting, haha.
TheRpgmakerAddict

author=Frogge
Thank you so much for the review addict! Really makes me happy to see people enjoying this, especially since I was worried it was a little too plain and unexciting, haha.

But why? Naaaah it is a walking simulator and a cute idea, I mean sometimes it feels good playing something that is calm and relaxing (and not exciting). Also from the description I expected not even a puzzle (and I have nothing against the lack of puzzles, for an event game of this kind it is ok!), instead here it was!