A dark and villainous story... 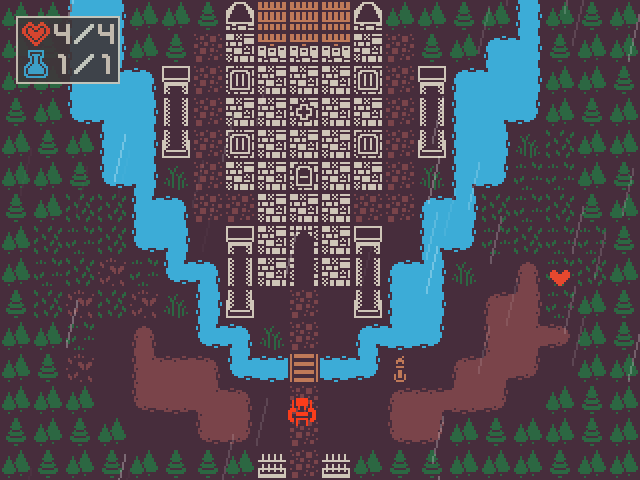 That tower radiates evil. Guess what? Final confrontation awaits us on the top floor!

Villain is another game made for the 1.44 Floppy Disc Drive event, created in two weeks. The villain is an armored guy that wakes up in a cemetery near the village of Agecroft after being left for dead (or was he resurrected?).
A voice tells him that he was the villain that ruled the land, and somehow someone else has taken his place, and now the land is overrun by ghosts, skeletons, spiders and other nasty creatures!

The game is a rather simple but fun adventure of action battles: the enemies follow some clear patterns and the aim of the player is find a way to eliminate them without being killed in the process. This means not only avoiding their attacks, but also understanding which ones have to be killed first to leave some room to kill the others near them, so in some occasions this is not a furious arcade, but a sort of puzzle game in real time.

The Villain is armed with a scyte that hits in the front with a reach of two tiles, has in the beginning a lifebar of three points and can hold one healing potion. There are no experience points but permanent upgrades can be found, also it's possible to save at the torches found in the various levels, some will even reintegrated life or healing potions, so the game is not too difficult (except maybe for the final confrontation). 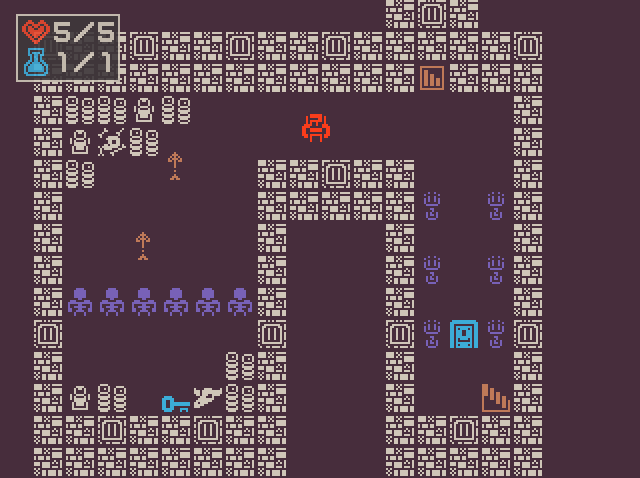 A row of skeletal archers won't be enough to stop me. I NEED that blue key!

So yes, no experience, save points and what else? Oh yes enemy respawn if you backtrack even if this does not always happens (for example at the farm only the bats respawn, not the big enemy "boss"). Each map is also a single screen "puzzle" that has to be solved in order to access the next location, and this sometimes means collecting keys to open locked doors. Simple and easy, and well done, I think.

I also liked very much the visual style: it's simple but effective, the Villain is immediately recognizable by his red armor and also the other characters (blue for the enemies, white for the ncps) are clearly identifiable. The appearance is minimalistic but fits the genre and has a distinct charm.

Speaking about the story, well this is maybe the weakest aspect since it started really interesting (reminds to me the plot of the first Overlord videogame, more or less) but later it leaves many snawes unresolved. I also hoped in some more interactions, I mean there is a farmer complaining that his house is overrun by monsters but you get nothing if you actually spent your time killing them! Pity!
The game is also very short, I guess it won't need more of 15 minutes to be complete, and other problem is that the savegames are indistinguishable by empty save slots... but ok, this is not a terrible flaw that breaks the game, I guess! 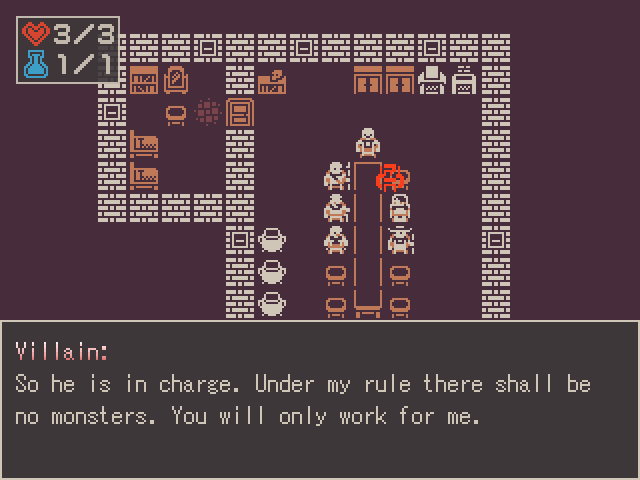 The Villanous Verdict
Villain is an interesting entry, a well done game that would be even better if expanded: more story (it left me with many questions and I expected some kind of twist anyway play it and tell me your opinion!), more levels, not more monster because there is enough variety but more maps and "action puzzles" to solve, because the mechanic are well implemented and fun, it's pretty easy but since this was made for an event with using just Rm2k3 I cannot complain at all of the final result, on the contrary it's a pretty cool and stylish mini-game! It's pretty easy but as I clarified before the final combat will need some skill and quick reflexes to be won, in any case it's nothing impossible, it took me I guess 5-6 tries.

I hope to see more, this entry gets 3.5/5 from me, not your average game at all! 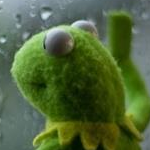 Close
05/17/2021 09:29 PM
Great review, I enjoyed the read. Thanks for playing the game and giving feedback, you made some good points that even I didn't notice when testing (blank saves.) I'll definitely work more on the story for any other events I partake in.

You also make a good point about the interactions with NPCs, next time I try this game style I'll try and do some more world-building. Again, thanks for the review!
TheRpgmakerAddict

author=NotADev
Great review, I enjoyed the read. Thanks for playing the game and giving feedback, you made some good points that even I didn't notice when testing (blank saves.) I'll definitely work more on the story for any other events I partake in.

You also make a good point about the interactions with NPCs, next time I try this game style I'll try and do some more world-building. Again, thanks for the review!

thanks! It was enjoyable and oddly more difficult in the first parts (especially the one after the village), I guess I was able to get good, anyway the final boss is hard but manageable! Well done!
Pages: 1