Story: Aunt May is ready to create the Infinite Library. She just needs council approval to use the Purple Orbs. While she gets approval, she's left you, her niece, in charge. A man delivers a package of Purple Orbs. It seems a colleague couldn't resist the opportunity to acquire some and recommended not waiting for council approval. While you run the library, a rat gets into the bag and scatters the orbs all over the place, creating an endless library universe that you must search through to gather all the orbs up. 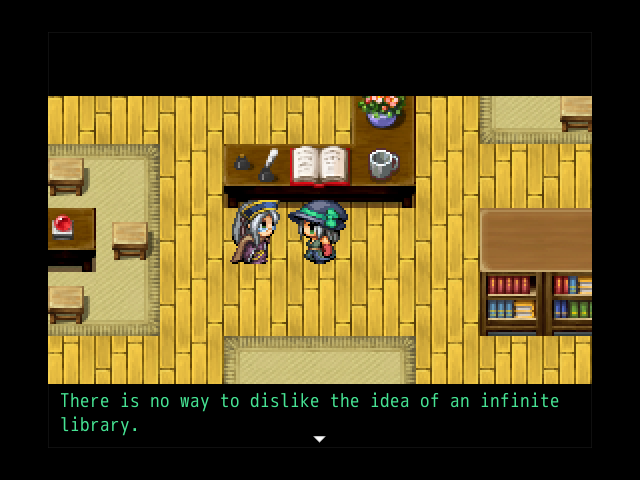 Sure there's ways to dislike it! How about it taking forever to find that one Onion article you've been looking for?


Writing: Good! Simple! To the point! Easily digestible! Tells the story at the beginning and the end of the game. It's cute and whimsical. There's not really much to say about it on a technical level. There's more than you would expect from a simple puzzle game. There's wonderful nuance in every aspect of the game. 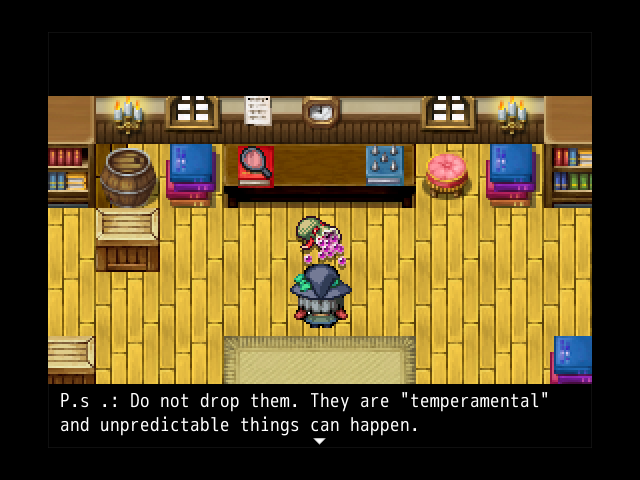 Hmm...removing that tongue from the writer's cheek may require surgery.


Gameplay: Okay, when you're playing this, your first thought is going to be, "Hmm, this is really simple. All I have to do is collect these orbs? This game's going to be too easy," but if you're paying attention like I was, you will notice that there's a life meter on your upper right. The thought may cross your mind, "What's the point of a life meter if it's not being used?" Life, as always has a sense of timing, and these thoughts may start really turning over in your head around the time when you reach the third stage, which is when the rats start showing up. Then a couple stages later, the books. Then a stage or two later, the clock.

A tutorial could have served this game, but it does well in its own right. The first stage, you're just collecting orbs. Nothing else. Just find them all. The second stage, you have obstacles that have to be blasted out of the way or you can't progress. This is where the dev would have done well to tell us how to get past them. My first thought was to simply interact with them. That didn't work, so I started pressing other buttons. It took me a solid minute to get past obstacles. Why? Because none of the normal buttons used by the VX Ace UI were working. Now, I have seen let's players give up on a game because the normal UI buttons the engine uses weren't working and they never considered that a button reassignment script was being used and they had to press a button not normally used in the VX Ace UI. In this case, the A key. Fortunately, nothing was messing with me while two piles of books had me locked in place, so there was no hurry to figure out why I couldn't get them out of the way.

Then there's the enemy themselves. Now, I have criticisms, but I don't want anyone reading to take any of this the wrong way. The difficulties with employing shooting mechanics in RM games is a little bit on display, here. The enemies have to be on the tile, to the pixel, or you just won't hit them unless you somehow can simultaneously hit both tiles they're on, exempli gratia, coming directly at you. Then there's the other issue where quite often, even though you've shot directly at them, they're moving so fast, it's just not possible to hit them, so they just automatically hit you, and this is usually unavoidable. However, the developer seems to have deliberately configured the enemies to take advantage of the flaws in this system, which really makes them very hard to handle when confronting directly. The game is plainly encouraging avoidance as the preferred strategy. It doesn't actually come off as being unfair. It really just comes off as an extra dimension of challenge, and I really didn't expect an item collection puzzle to be this challenging.

The enemies, of course, distract from the puzzle, which becomes increasingly difficult, as obstacles get in the way of the orbs, and towards the last few stages, can't just be blasted out of the way. There are switches that have to be tripped. You're also going to run into fire obstacles that injure you. You have to go through them, and there's no way to remove them, at least in the main game. So, the puzzle actually factors in having to injure yourself without injuring yourself too much to continue. You only get two heal potions per level, and they only appear when you've lost a full heart, so be careful with them.

As you complete each level, you will get a key, that takes you to the next level, and gives you a full count of all the orbs you have found, which really just serves to tell you how much of the game you have left because you cannot get the key to exit the stage unless you find all of the orbs, so even without the counter, you would know you have found all of the orbs that can be found up to this point. 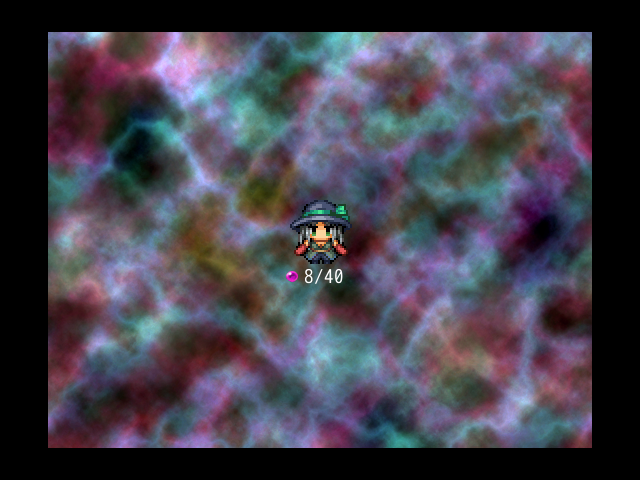 Don't you just hate when you're looking for your big, purple balls in a library and you fall into an endless void?


Upon completion of the game, you're given a cutscene treating you to the Infinite Library open for business and the option to play an increased difficulty version of the game, or an Alternate Reality version. I really wish the Alternate Reality version of the game had been the main game because I like the magic mechanics a lot better. You can choose fire or singularity, but not both, and you need both to complete the puzzle. Although the dungeon aesthetic is really only there to change up from the library you just spent ten levels in, if the Alternate Reality could have been the main game, having it in the library could have worked just as well. 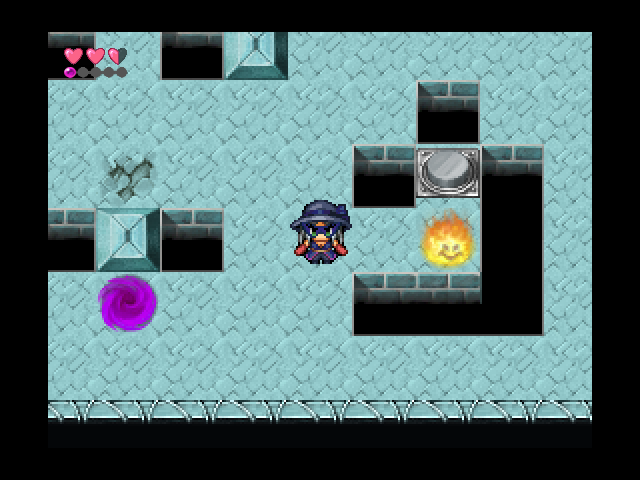 Villains beware. The Dark Librarian is there!


So, what happens when you die? Well, that's something that kind of freaked me out. The first time I die, the game simply closed out. This was definitely a glitch, as the game never did that again. I thought I had just lost all of my progress. I hadn't saved, but the game saves automatically. So, there's no point in which you just lose everything. You can just keep trying a level again until you get it.

Graphics: It is the RTP with edits by the developer. Very nicely put together, too!

Music and Sounds: Very nice, whimsical music from hmix.net and maou.audio and it seems the sound effects are also RTP. The developer made some simply wonderful choices of music for this game. It really perfectly fit the atmosphere and setting.

Conclusion: This game is good. I highly recommend it. One of those rare things, it actually has some pretty solid replayability with its multiple modes. It's something you don't get a lot in RM indie games. I have been doing reviews looking for games I thought deserved a Misao. I haven't found many, but this one, I put in for Best Short Game of the Year. The game was only supposed to take 15 minutes to complete. While that's true, I can't even complain about how short it is because of the different modes that are very different from the main game. It's short, it's simple, it's challenging, it's fun! I can't even think of anything to warn potential players to really watch out for. Watch out for the game actually being harder than you expected! Look out for that! (Why does this only have 17 downloads? Really?)

Close
11/26/2021 02:28 AM
Hello pianotm.
What a nice surprise (five stars?!). Thanks a lot for the review. Glad you enjoyed the game. This game was a prototype from 2017 that was forgotten until I started redoing the mechanics (in 2021) that resulted in "alternative reality" mode.
From then on, the ideas came back and I decided to dedicate myself and finish the project. The two mechanics are different, but the goal is the same, so I decided to merge the two into one game.(If you stop to see, the maps sizes are different, you collect 5 orbs instead of 4, etc.)
After that came the idea of ​​the infinite library as the excuse to collect the orbs. So, I put in first place the map and mechanic that combined with the theme.

#Yes, my vision was to create that sense of strategy in the player.
#The fire enemy you can defeat with the power to create clouds. Same for the clock. The purple fire regenerates so there's no way to defeat it.
#About the controls, I put a picture in the first stage where it explains which keys to use. But I have to confess that the image was small and might not be noticed by the player.
#The number of orbs collected is intended to show the player that the game is coming to an end.

Thanks for your fanart, it was amazing.
pianotm

You're welcome! I'm glad you liked it!
Pages: 1