Very cute and short, waiting for more! Do not forget this!

Forget-me-Not is a mini-adventure game (took me 18-20 minutes from the beginning to the end) that is a prequel for the upcoming game "Melissa and the Flower King", that will set in the same setting. The game is about Melissa, a girl that was adopted from an orphanage by a family of florists. After many years Melissa returns to the old manor in order to claim the legal inheritance, since she is the only living descendant of the family.

The game begins as Melissa arrives at the dark, abandoned manor, that soon reveal itself to be a mysterious place with some strange occupants: the flowers! As Melissa wanders the dark hallways and visits the old places she will also remember the events of the past, telling us a story that is probably just the beginning of what will be the real game...

Do not expect to spend much time to finish this simple scenario since it consists in a couple of tasks (find the items, combine the intems, give the item to the character, and that's all) while visiting ten rooms of the manor, anyway it's still possible to die if you make the wrong choices (but do not worry, no chase scenarios or action parts). You can same the game at a couple of saving points that are flower pots (the flower is the theme of the game, of course!). 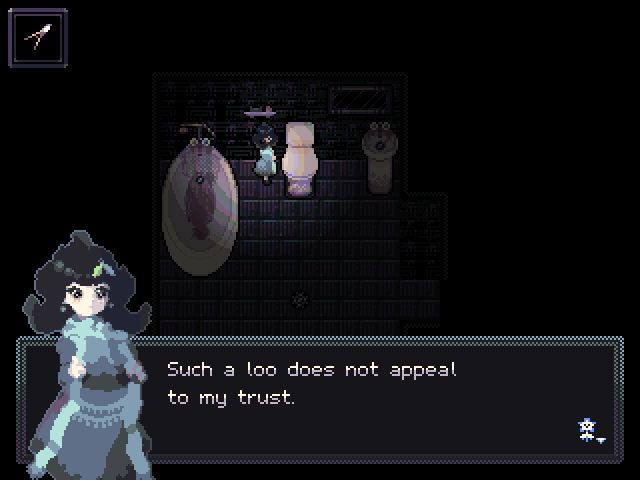 Or Melissa is very small, or this bathroom was made for giants!

The game looks excellent! I loved the graphic style and portraits (well there are 4-5 of them) of the characters, the "enigmas" (if I can call them so!) are rather simple and I also liked the use of picture to represent the flashbacks of Melissa's youth in the manor. The setting is also very inspired.
What I did not like so much was the slow walking speed, sound of the doors closing every time you change room, and the darkness that in some cases made it difficult for me to understand what I was supposed to do/interact with (it took me a bit to find the key but uhm ok... maybe it's me since I expected to find the key lying somewhere like the shears you need in the beginning!).

I did not see any typo or error or but but the game is extremely short, but well made and interesting. We don't see a lot, most of the story is (clearly) purpousely left unexplained and we also do not learn much of Melissa's personality.

Final Verdict
For a game of 10-20 minutes this is well made, polished and with nice stylish custom graphics. I admit I expected some more contens since I saw some inaccessible accesses that I supposed to be able to open later... nah, I was wrong the game ends before you can do that, but nevermind! Thos is still a promisong beginning.
The atmosphere of mystery and the curiosity that this game can infuse is something that I'm sure will make many players interested in playing the "Melissa and the Flower King" sequel/real game, probably expecting some more difficult tasks, but I can say that this is a really nice appetizer.

This was Forget-me-Not, an unforgettable, very cute and very short adventure game. So now I am waiting for more, don't forget this!