When a game is this good where are you supposed to even begin?


For the average gamer, the idea of a pretty walking simulator might be off-putting. I myself rarely play this kind of game, in the fear that most of them will end up as a waste of my time. Upon launching this game I was proven to be sorely mistaken. The beauty of False Rebirth's storytelling and art direction is impressive in a way that is impossible to describe with words alone so I'll preface my review by asking why are you still here? Play the game, right now. 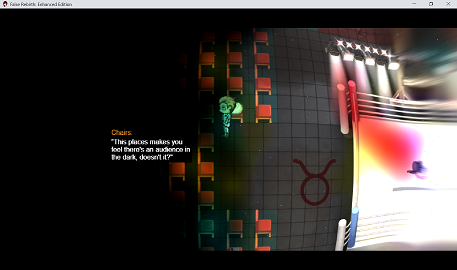 Just look at that lens distortion. How do you even do that? Everything in the game flows so smoothly that I didn't even have the time to ponder how the developer managed to execute them. False Rebirth looks good, period.

Immediately from the very start of the game you're given a smoothly animated title screen perfectly paired with a moody piano instrumental. False Rebirth pampers the player with amazing transitions such as this, making the entire experience extremely immersive. The developer doesn't seem to be the original creator of the graphics or the music used in-game, but nevertheless, the artistic direction they went for was absolutely on point. From mapping to visuals for cutscenes, everything shown on screen was a delightful treat for the eyes.

Yet the one thing that undoubtedly carried the weight of the game's excellence was the writing. 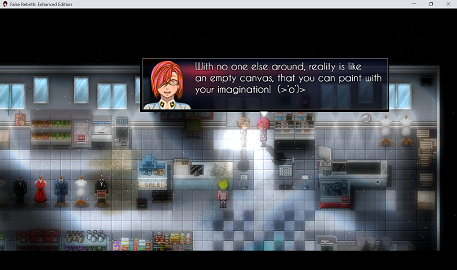 I would be doing the developer injustice by poorly trying to retell the story in my own words. False Rebirth narrates an inexplicable apocalypse told through the eyes of the last man on Earth. The game, however, strays from various others of similar themes by focusing instead on the protagonist's emotional turmoil and how he attempts to cope with his situation. False Rebirth doesn't bother to come up with pseudoscientific nonsense to explain its unnatural happenings but delves solely into the emotional aspects of the protagonist's terrible fate. Details of what actually happens are explained minimally in text, but shown perfectly well via appropriately placed cutscenes. Despite having zero voiceovers I am given the feeling of watching a live movie. Every action feels natural and things happen constantly to keep me on the edge of my seat. From start to finish the game was a rollercoaster of emotions. 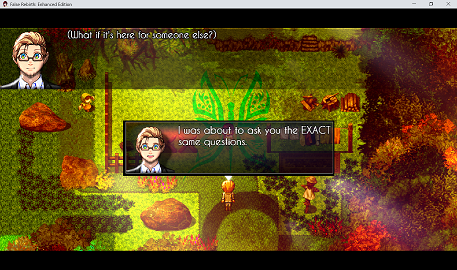 Every line of dialogue is written in a very personal and intimate manner, such that you can't help but feel as if it was written from firsthand experience. Screenshots can't encompass enough as there would be too much I'd have to take. The game dunks me headfirst into deeply emotional topics often in a very dramatic fashion and it doesn't fail to deliver stunning impact every single time. Visually, all dialogues are presented in a very fresh manner by having the text boxes displayed dynamically, popping up here and there in different places. It further amplifies the sense of disorientation False Rebirth's psychedelic colors already induce. We also get to read the protagonist's inner thoughts along with what is being said in reality, making the process feel very unique - hilarious too at times. The game does have its funni haha moments. 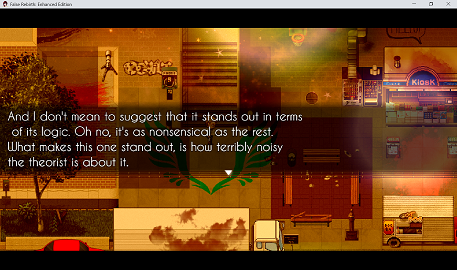 One thing I found a little lacking was the chase scenes. The game makes player motion look smooth and has very well-put-together maps but this makes running around extremely difficult as you have no idea where to go, or rather, what to look out for. Often times I'd get stuck at corners that are hard to spot or slam into walls that I mistook for fancy roads. The game autosaves frequently in these parts, however, so I can't complain too much. And besides, the scene transitions that come along with these chase scenes are always so good this minor issue can easily be overlooked. Also, the game likes to come up with new ways to break the monotony of the current task such as by having the player pick up glasses for drinks or toss the bones of the dead into a fire pit. Lovely. 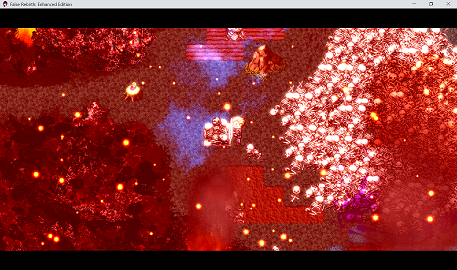 Death is the central theme of False Rebirth and like many indie game horror developers these days it utilizes suicide as a big storytelling narrative. False Rebirth, however, deals with this topic in a very rarely seen tact and tasteful manner. The game gives solid reasoning behind why the protagonist was led to take the road he went on but also then provides a scenario that rightfully forces him to reconsider. The feeling that I get from the writing style of the developer is a palpable passion to express the pain of death and the regret which the protagonist finally feels regarding his attempt. I felt shock and anguish during the birth scene. Confusion and rage at the loss of the baby. And experiencing the true ending left me with a bittersweet feeling and solemn contemplation. I had real tears in my eyes.

Perhaps one might wish more explanation was given to the Angels of Death, the looming terrors that stalk the protagonist throughout the game. The game forces the player to experience this world through the eyes of a hallucinating protagonist so it's difficult to know what is true and what is false. This is perhaps the biggest question left unanswered at the end, but as I've mentioned at the very start of the review, explaining some apocalyptic horror was not the focus of the game. The developer uses a surrealistic circumstance to illustrate a very realistic tragedy. It's an impressive display of writing talent.

There are very few faults that I can find within the game other than minor grievances, typos, and a few barely noticeable bugs. Yes this game is short, yes it is a walking simulator, but that is exactly what it is designed to be. The story that False Rebirth tells is one that leaves a profound effect at the very end and no better advice I can give than urging you, the reader of this review, to play the game yourself.

My final score is 4.5. False Rebirth perfectly delivers a somber and mature tale of death in a very artistic manner. While it doesn't have very astounding gameplay mechanics, the game absolutely surpasses many in the narration and story that become its central focus. I definitely recommend this game for anyone who likes a bittersweet tale and excellent writing. I think now I need a moment to get a glass of water and pray I won't mysteriously blackout during the process.

The effort that you put in is definitely worth it and is honestly quite inspiring. I think more people should strive to create a lasting impact with their games/stories.

Keep up the great work!
SigmaSuccour

"Every line of dialogue is written in a very personal and intimate manner, such that you can't help but feel as if it was written from firsthand experience." ~ Marmalade

Thank you, thank you, THANK YOU!
I can't tell you what reading these words right now, have just done for me....

Still, let me try. (I want to sort these thoughts I'm having right now)
I put myself in my games as the main character, just to get this effect. (Of it feeling like an intimate, first hand experience.)
Imagining the story to be real, and happening around you is the easier bit.
The hard part... is to do this knowingly.
To knowingly put yourself in situations that will emotionally overwhelm you.
And when you're there, and emotionally overwhelmed... and you have an honest response.
Then be brave to put it in the game. No matter how silly, brutal, or vulnerable it shows you to be.


Using the same process... I recently wrote a scene for my current project.
After writing and reviewing it, I became disturbed for the next 2 days.
And so I started questioning myself... is this level of investment worth it?
Is this... working? And making my games noticeably better?


This question has been laying at the back of my head since then.
And it's been... dragging me down.

So... thank you, Marmalade. Thank you for this review, and for your kinds words.
I see now that it's working. And so I'd like to continue improving on this effect in my work.
Pages: 1