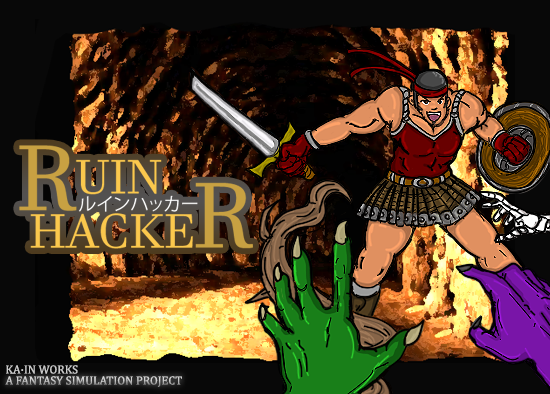 “A shadow looms over the small Kingdom of Nohrica and not even the Burgmarkian Royal Guard seems capable of dealing with all the turmoil threatening the once peaceful country.

There are a thousand stories coming from far away places about the Hackers, powerful mercenaries ready to face any challenge (... for a generous payment!).

It seems as good a time as any to test the veracity of those legends!”

Taking control of a band of adventurers, you must complete a number of quests to progress through the game. Instead of maps featuring large scale battles, every quest will challenge you to progress through different areas divided in smaller sections with the aim to complete each quest's objective.

Most weapons, armors and valuable items are randomized and obtainable by defeating enemies, finding treasures and as quest rewards. Consequently, all quest can be repeated and each area offers different branching paths.

I haven't really made any progress report on here since forever! Normally, around this time, I would have liked to release a demo of sorts (as I generally plan to do when the game takes a lot longer to develop, as it's been the case!). Instead, I'm just pushing to complete the game and release it fully sometime during 2022 (something that shouldn't take "much" longer, I keep telling myself!), so in the meantime here's a small compilation of character and enemy designs plus some gameplay snippets for all those interested on seeing how things are going with Ruin Hacker!

※ From left to right, we have the Gladiator, the Battler, the Enchanter and the Vicar on their "new" incarnations! These four are actually the initial party, but the game will include some other familiar classes for those who might have played some of my previous projects (and some completely new as well!).

※ Here's some small selection of enemies that I've been posting mainly on twitter. I think I got the full roster covered, although since working on this is probably what I like the most (unless I'm utterly uninspired, which happens often!) I might include some new extra ones to fill some free slots.

※ Here's some gameplay "footage" to get some better idea of how the game works (or, well, some parts of it!) There's still some work to do, particularly regarding balancing and story presentation (what little there is... as you might have guessed, this ain't a narrative heavy game either!).

Thanks a lot for reading this far! Hopefully it was time well spent! Also... apologies for my lack of skill at presenting my own stuff, I'll promise to try better next time! ^^U

author=UPRC
What a pleasant surprise! Always love to see SRPG95 games pop up!

Gammak preservation FTW, lol Working on SRPG95 has been a nice change, really!

I even wonder myself how this will turn out! But hey, #liveandlearn! Thank you as always! <3

author=Mirak
This looks like something I defo want to try. Subbed.

Thank you so much! Hopefully, it won't take that long to be completed! ("Hopefully", lol)
AnonR18
0

author=AnonR18
will it be possible to marry the characters as in fire emblem????

Hey Anon! At present, I'm really just focusing on finishing the game and stuff, and that idea (although I always found it funny to implement in any game) is perhaps a bit beyond the scope of this project. ^^
AtiyaTheSeeker

author=AtiyaTheSeeker
Oh golly, I could just imagine separate "game over" screens for each defeated hero if doing it Fire Emblem style. X3

Trust me, that idea has crossed my mind more than once! xDD We'll likely have another (in)famous GO screen, but perhaps more uh... considerated towards SRPG95 limitations, LOL!
Pages: 1