The Amazing World of David

Right on the Nose

The Amazing World of David is a short RPG made by perezer2002 in RPG Maker MV. Though I am not familiar with this developer, this appears to be their first attempt at making a game in RPG Maker, so I thought I'd dive in and see how this demo holds up. How will our friend David and his companions fare in this grand adventure?

The Titular character in The Amazing World of David is a teenage boy with who looks like the comic strip characyer Ziggy and loves to play video games and dreams of being a hero just like in the game. The introduction sequence takes place in the RPG world that David one day imagines himself to be the star of, until he is interrupted by his mom, who also looks like Ziggy, to go to school. I didn't really learn too much about David or his mom, or very many of the other Ziggy-like characters in general since the dialogue and plot progression are very simple and direct and feature virtually no character development. The Mayor's wife, for example, just states "It is hard work being the Mayor's wife" and most of the other NPCs aren't too much more complex than that. On the plus side, it means we can move the plot along quicker. I just wish there weren't so many spelling errors.

The game's presentation seems to be a mixture of stock assets and original art, such as the character portraits, enemies, and battle backgrounds, as well as what appears to be some custom music. The original assets are most comprised of simple vector art which may not seem impressive on its own. But perhaps if the developer switches out the stock assets with original tiles it may look pretty cohesive.

Honestly, I have to say there's something uniquely charming about a game that has a "clip art" sort of look and feel to it, even if that wasn't the intent. In an age where so many devs are going bigger, bolder, and harder in this vicious battlefield we call indie development, playing something that uses such a simple style is... actually kind of nice. It's just nice to sit down with a hobbyist game like this for a few minutes and take in someone's hard work. 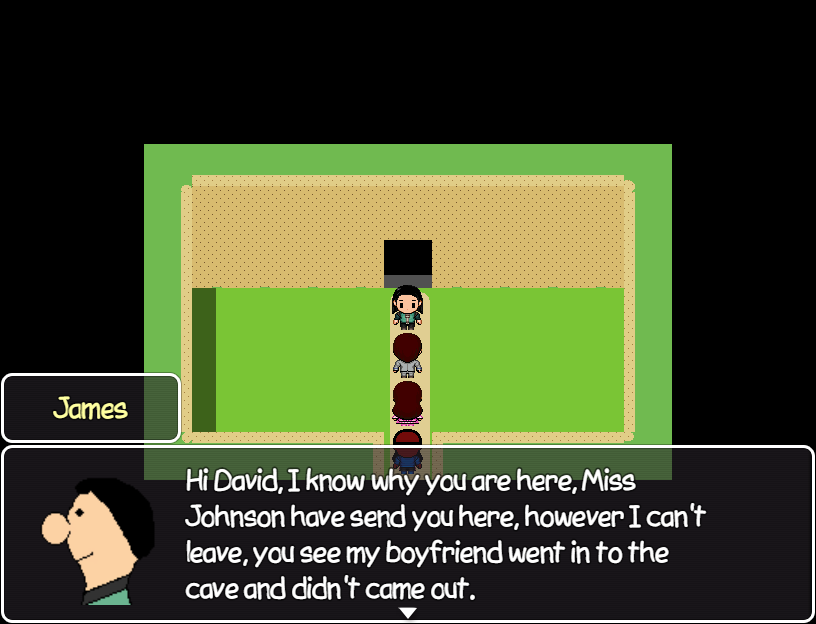 Next, we're onto the maps, which are... well, they're not great. Most of the maps are much too big or much too small, including the game's two short dungeons which are just two very long hallways padded with random encounters, a single treasure chest, and a single NPC.

There's not much going for it in the gameplay department here just yet, either. Your party of four is assembled very quickly (and buggily: even if you tell them not to join your party, they just do so anyway) and every encounter can be solved with basic attacks. I only had to use healing magic twice in my whole playthrough since enemies only seem to use basic attacks, including the sole boss fight at the end. By the time I hit Level 3, enemies posed virtually no threat. But thankfully the flee rate was generous enough that I could skip unnecessary fights.

My whole playthrough of the demo took about 15 minutes. There's really not much to The Amazing World of David beyond some simple NPC interactions and a few battles. It is very clearly a first-time project, but it didn't crash and there weren't any major bugs that prevented me from progressing. It's just one of those "nice little games" you need to break up the big heavy hitters once in a while.

Best of luck on developing the full game!

Close
10/18/2021 04:25 PM
Hi, Thanks for the review, This is the first game that I’m working on, so getting feedback from people who know how what they’re talking about it helps a lot.

I’m dyslexic, I hate to put my disability as an excuse because people like me end up doing great things. So I’m using a grammar check to see the words are spelled correctly.

As for the NPC in the game, I didn’t do much with their background because you never get to see them again. They’re there as background characters nothing more.

I draw the tileset myself, I was trying to make a cartoony style. As for the music I’m learning to compose the music in my game.

Anyway, thanks again, you have been a great help.
Pages: 1