Starts quite good, becomes even better...

Hello!
First thing, this is rather peculiar... it's the third futuristic rpgmaker game on a row I review, I guess that cyberpunk/sci-fi games are as much popular as fantasy ones.
Second… let's begin the story.

This time Markus and David are our two playable protagonists. Yes, theres not a single hero but a dynamic duo (even if other characters join and leave the party during the course of the game), but the title should have already clarified that, in any case these two are a couple of thugs (the sore losers) that work for their boss Jade in the Ferusian slums. Ferusia is a typical cyberpunk setting ruled by a corrupt government, there are rebels fighting against it, and people live depressing and dark lives in a polluted enviroment. This sounds like the beginning of FFVII isn't it? Well this will sound even more true if I will tell you that our redhead protagonist Markus is a warrior that hates firearms and fights with a rather big sword! His pal, David fights using two axes, he's tougher and with a wild combat style (he start with a powerful random multiattack that in the beginning will destroy most opponents), in any case they both live in the slums doing jobs for a criminal boss, that seems to be the most kind of the mafia bosses (trying to make the slums a more livable place).
This is just how the adventure begins and will be about classical cyberpunk corporative heists and rebels fighting the evil government… 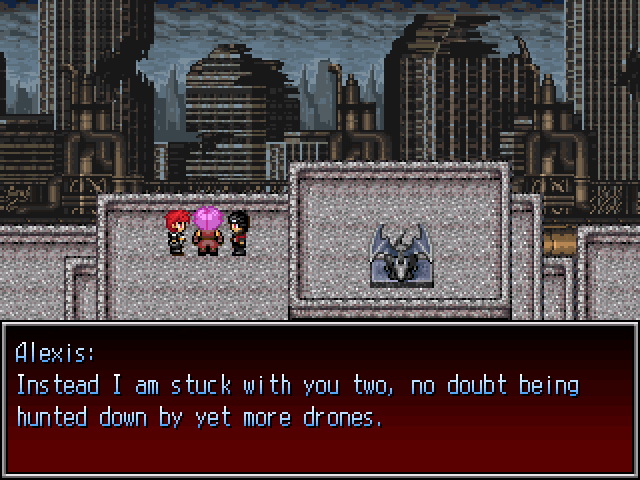 The dangerous world of tomorrow
Sore Losers is a mainly linear game about exploration and adventure: our two protagonists are often joined byt secondary characters to perform main and secondary quests, there is combat and many minigames.

Let's start with combat: this is the usual fornt view atb combat against mutants robots and punks, out heroes have various skills and special Attacks that cost EP, nothing new here. The only original thing is that some optional abilities can be learned permanently performing some timed quick time events in some pearticular situations: Markus can read manuals about swordsmanship, David can learn from videos (the only noteworthy difference is that Markus has the manuals in the inventory and can retry the quick time event until he learn the skill, David has just one chance or it is lost forever).
These skills are totally optional but, you know, the more, the better! Consider that the game is very stingy from what concerns rewards (and I think this was on purpouse, due to the bleak setting!), don't expect to buy all upgrades and equip all the best items, because money is rare (only SOME human enemies once defeated will let you gain a moderate quantity of cash… and you still need it for healing consumables and resting at the inns). Also remember that while you can find powerful weapons like assault rifles, flamethrowers and chainsaws, characters may use some of their special skills only with their preferred weapons (for example Marcus is a swordsman, but he can equip a gun or a sledgehammer, anyway in this case he loses all his special swords attack of course. David uses axes, Locke wears combat gloves, Alexis wields handguns, and so on)!

Ok, despite all these hardships and I can confirm that game difficulty is just medium (most opponents' attack aren't really strong), it may be challenging sometimes but never too difficult. Enemies are sometimes avoidable and no opponent is too difficult to bead if you play your cards right and expend wisely the resources (the grenades, or "nades" are extremely useful in some istances)! Oh and there are also many optional quests that will provide extra experience and resources, and it's wise doing them for the latter, so be sure to explore every location and district to find these extra sources of income. Or steal from unoccupied and sometimes locked rooms (this happens in cantasy jrpgs but it's even more appropriate in a dark cyberpunk world)!

Another aspect is crafting: during the game you will find both shops (that sells armors, weapons and consumables) and mechanics that will provide weapon upgrades. Just bring some money and the item required to "transform" your weapon into a better one!. Anyway if you forget to upgrade a weapon, remember that probably next shop will have it for sale (and a nearby mechanic that is able to upgrade it to the next step!). 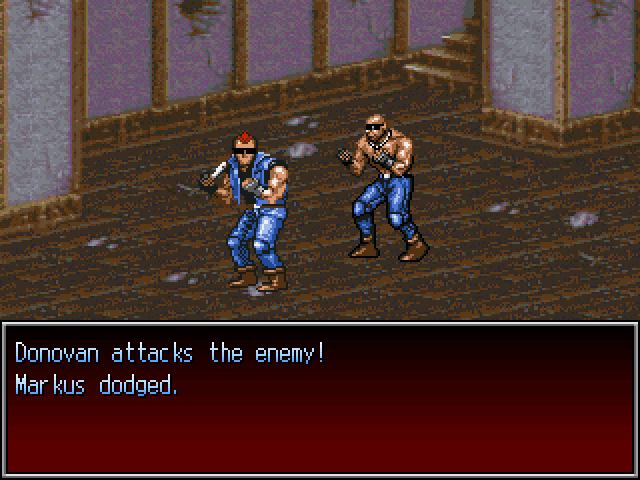 Ha! Donovan just missed his attack! What a loser!

Minigames, puzzle and more minigames!
Besides combat and the timed quick time events I mentioned before, there are also many other activities. Expect to solve some nice little puzzles in order pick the locks of the closed doors (anyway you also have to buy lockpics first!), sneak to avoid guards and surveillance drones, jump obstacles while running from a robot, snipe some soldiers in first person, pilot a helicopter inside a cave without crashing and cross the highway avoiding the cars (Frogger-style!). That's a lot to do and a lot of fun too!
There is also the possibility to gamble (I never tried it, because I expected low chances of winning) in various places, and since this is a cyberpunk game… guess what? Hacking minigame! Ok, it's just a sequence of three (simple) mathematical operations that you have to solve in a short time, luckily you can retry as many times you want (the alternative is finding the password, and just one party member can hack computers, so don't even try when she's not part of the team!).

Besides minigames there are also some puzzles (like these found during the laboratory part and the autoclave bonus mission) and some "adventure" sections that require finding and using particular items in particular places (sledgehammer, wire cutters, screwdriver… and a stuffed toy bunny!) 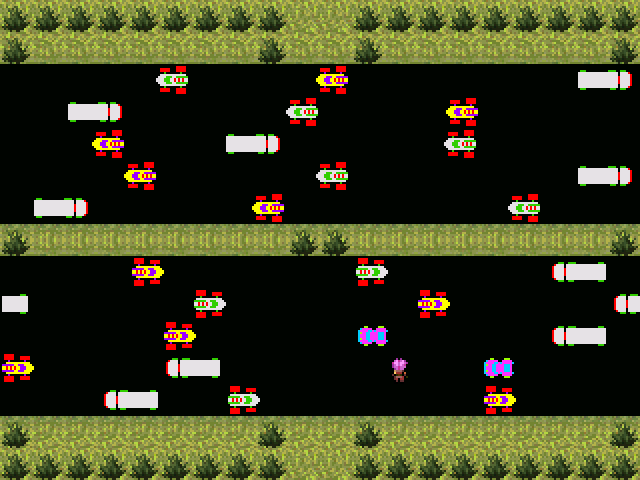 Only a loser would be forced to run avoiding the incoming traffic to cross the highway...

A dark world, a dark story
The game is a classical cyberpunk adventure: steal from the government, survive fighting both criminals and cops (and rebels too!), every man for himself, since there is no "good guy" in this setting. Period. For the most part the game is a linear story that sees our team moving from a city sector to the other, then towards the end you have the first (and last) meaningful choice that will change what will happen during the final parts of the game (including the ending).
It's all good, really, and I liked a lot both the characters involved and the storyline (it's a classical dark cyberpunk adventure, no supernatural involved) considering also a coulple of twists that surprised me, despite being well motivated.

The futuristic gritty setting is mastefully recreated through maps that are compact (sometimes even too much considering the dark abandoned buildings in which you have to navigate among the rubble) and rich of details, the characters that populate this modern setting all look appropriate (even if there aren't many animations for what concerns the main characters, nor facesets), and despite the use of classical rtp edits and sprites and chipsets from various sources, I found the graphics coherent and realistic (there are urban streets, overpasses and walls with graffiti, there is clearly an effort to make maps look immersive and believable).
Enemy sprites mainly comes from fighting games, so these are gangster, punks, soldiers and dominatrixes (really!) and in most cases look pretty good.
Likewise music is well selected and even if here I cannot find the source, I found it appropriated to the general mood, and never annoying or out of place. 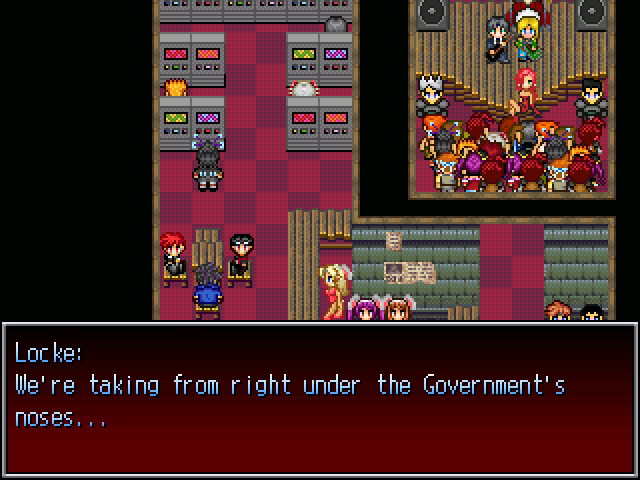 And while Locke is talking to us, everyone is having fun in the next room... we're really losers!

Verdict
This is a good game, it's quite long (but not too much!) and challenging (but not too much!), and in my opinion it gets better and better as you play, providing some twists and surprises here and there. The only bad thing I found were some typos, a couple of annoying sections (I found annoying the sequence of fights on the train part, and the laboratory puzzle, because you need to hack the computer EACH time you try to use it!) and a sort of bug: towards the end I had to edit an event to unlock a door (BUT it seems I am the only one I had this issue!!!), since despite the game claiming that the door had been unlocked after the hacking attempt… this did not happen and the doors kept being locked! (Yes, I had to hack the game to rectify a hacking event that di non work as intended… lol!). Oh and the game also warns to use different saves on some maps because you risk getting stuck, but oddly this instead never happened to me!

Despite this last issue that was maybe avoidable choosing a different sequence of actions (I'm not sure, but I guess is also avoidable if you choose another option during the last part of the game) this is a solid entry among the cyberpunk rpgmaker jrpgs.
So what? It's a good game, and it gets a 4/5. Don't be a sore loser, try this game!