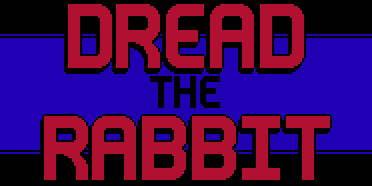 The King of Dread, that is what they knew you as. High and mighty in castle Bloodburg as you ruled the realms just and fair. However, not all inhabitants of the lands agreed with your reign. One night, the captain of the Wolf Knights, Rorick, enacted his plan to overthrow you.
He succeeded in destroying your body and though that has perished forever, your spirit still lives on. With a plan for revenge you have fled into into the wastelands in search for a new vessel to house your soul.

Dread the Rabbit is a turn based roguelike game with randomly generated maps and permanent death. Journey across seven environments to reclaim your throne. Unlock long forgotten magic stored in the relics of Ancients. Earn boons from the gods and empower yourself at their altars.

Getting Started
- Eliminate all enemies on a map to earn a boon.
- Trade boons at Altars to power up.
- Keep an eye on your weapons durability and plan your moves accordingly.
- Weapons break when their durability reaches 0.
- At times it might be wise to avoid the fight and flee instead.


The first version of this game was originally made for the The 1.44 Floppy disk event

Dread around the web

Terry's Free Game of the Week
It’s got more of a casual pace than many games in the genre – runs are long, and they can take a while to ramp up. But once they get going, they get really, really interesting. I had a lot of fun playing this!


Dread the rabbit was featured on Terry's free game of the week!


If you're interested to see some gameplay Itch.io made a 30min gameplay video:

Dread the Rabbit was originally made for the 1.44 Floppy Disc Event,
but sort of slipped under the radar this year. It currently sits below 150 downloads.

It's a really impressive randomly generated rogue-like made in rpgmaker2003.
If you've played anything like Chocobo's Dungeon, Shiren the Wanderer, this should be right up your alley.

it's also 100% eligible for the Sleeping Beetle Ninja Award!!
If you're having trouble filling in this misao category this year.
This should be your first choice.

This was one of the highlights for me for 2021.
Very very cool game Momeka!! ♥