Visions & Voices: i like what I see and hear!

Visions & Voices is an RPG Maker game made in six weeks by Craze and Karsuman.
This game is largely non-linear and set in a period of ten days, in which our alter ego protagonist, Wanderer, visits the Montfort village to solve a mystery that concerns the sudden disappearance at night of most inhabitants, while those who do not vanish are going mad.
Our mysterious hero searches for clues and finds a log written by a "prophet who has fallen from grace". Then reality starts changing around him, things appear and other disappear, and this is where you will understand the title: Visions... and Voices!

As I mentioned before, the game takes places in exactly ten days, so this means that the clock is ticking, and the progress made depends on what you accomplish (or fail) on each day. This is interesting because it's the player choice to walk around and do everything they can, exploring any place, or instead wait and sit without doing anything, to create a party or go solo... the Ogre's Mug Tavern is in fact the base where resting can make the time pass to the next day. I probably don't have to tell you that you can get different endings depending on the choices made during the adventure! 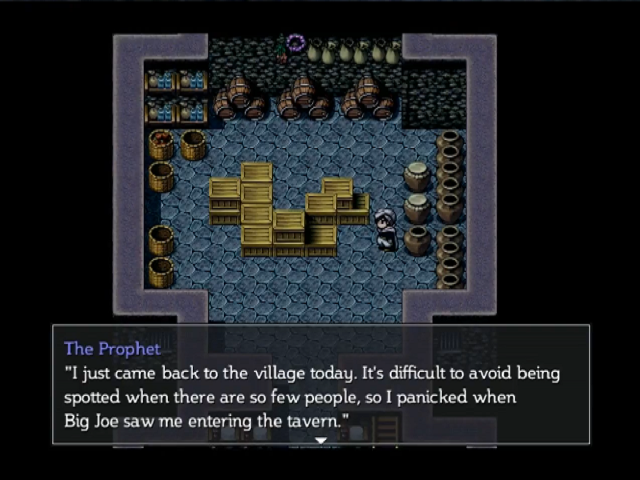 So yes, it's all in your hands, no predetermined and obligatory long cutscenes, you have also a wide choice between party members (seven, if I found them all, and consider that you cannot drop the main hero, the Wanderer), that also provide some interesting (and well written) dialogues. Every member of this gang of misfits (there is a bard, a fisherwoman, a lawyer, and so on...) has also its favourite weapon, may be claws, bows, shurikens, knives, axes and so on. They obviously have different skills and abilities, for example Marlowe has witnessed so many horrors that is immune to mental effects, Lyla has a Fire skill, and so on.
It's also interesting to note that during the game you may find and recognize some easter eggs, that refers to other games like Ara Fell, Speak No Evil (that I reviewed months ago!), Immortal Defense and so on. Nice!

The graphics appear to be a mix of RMVX and some custom stuff, the charsets are in fact often edits but they fit well with the detailed RMVX chipsets.
Monters are instead from the Milano-Cat resource pack and I liked them (despite the difference of style, I mean they would look better against other battlers, anyway I don't mind!). Mapping is ok, and really enforces the scenario of dread and isolation in which the Wanderer lives his adventure.
And the soundtrack... while not made purpousely for this game but created (by... someone!) for another project made by Craze, they are original and fit the game very well, while sounds are the usual Rtps but uh, ok, who cares?

Now combat. What I liked is that there are no random encounters, enemies are indicated by a cloud or a unique monster (a goblin represent an easier encounter than a troll!), and that combat is fast and furious! Oh and you also DO NOT level up ever, you just collect abilities finding them around, so grinding is no use here. But mind that this means that battles are fairly challending even on Normal Difficulty! And the optional bosses are VERY hard, not to mention the fact that healing isn't that simple, clearly you can sleep at the inn but this will also advance the time! Also there are several kind of damage (Melee, Ranged, Force, Psychic), some weapons deal only one kind, others are combined. Seems complex? Because it is! But many of us like challenges, don't we? 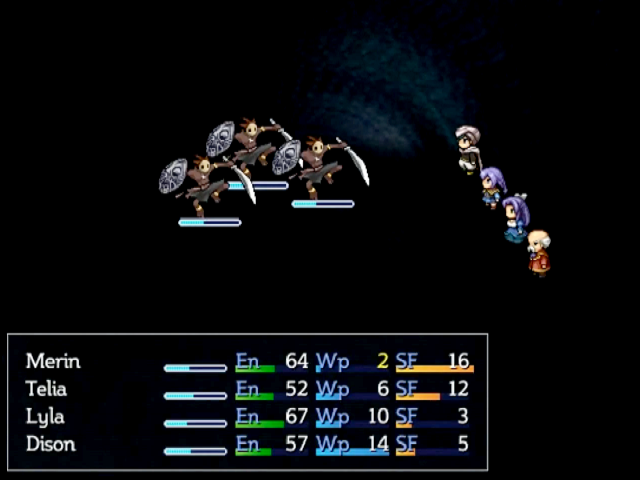 Final Verdict
Visions & Voices is a challenging original game. Set in a village near a lake that gradually *changes* (remember? Visions & Voices!) with the passing of days, with a protagonist that is not your typical blank slate silent hero.
As someone else said this is a solid game and not your typical rpg, it's not a game without flaws (I heard many people complaining of combat and its complexity and difficulty... well, play on easy, then!), still it's an original and well made adventure that plays differently leaving the grind out of the door, and still captivating the player with an intriguing story and some quite interesting characters. Did I have to say it again? This game is good, 4/5!

out of curiosity, which ending did you get?

quick note, just to clarify, i did not make the music. i don't remember who did either, rip :v
TheRpgmakerAddict

author=Craze
lol hey thanks for the review! glad more people are enjoying it after all this time.

out of curiosity, which ending did you get?

The first time?
I will just say...
"Could you not see the Visions? Could you not hear the Voices? Or...was it simply that you could not accept them?"

The second time a much better one, but not the best one!

author=Craze
quick note, just to clarify, i did not make the music. i don't remember who did either, rip :v