Welcome to EXCALIBURIAN! A classic fantasy jrpg adventure about the cute RPG Maker 2003 heroes made in RPG Maker MV!
The story is classical: evil is threatening the world, so a new hero should find the artifacts of power:

The sword, Excalibur...
The shield, Aegis...
The helmet, Tarnhelm...
And the armor of Judgment...

But there is a twist! We do not need to look for the fabled artifacts, but we start with them! Anyway there is a catch (of course!): to be able to equip and wield these mighty items the hero has to worship four relics inside four different temples, related to the items. Each time he will receive a blessing that lets him unlock the power of one of the artifacts (that do not just improve his skills but they also give him powers, also needed to solve some quests). 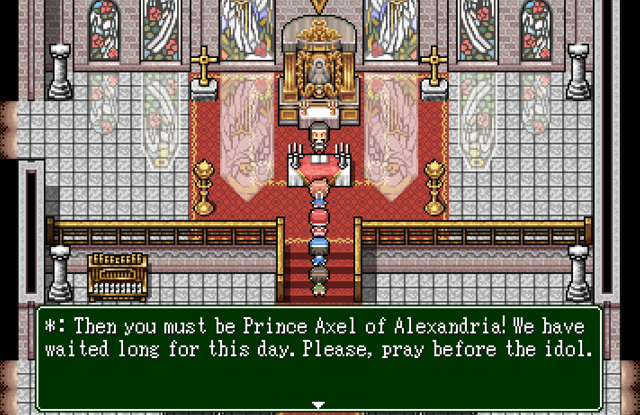 Yes, now the prince will be able to use a second artifact! Two left!

Ok, so this is the plot, but who is our chosen hero?

We start the game playing as the protagonist, the prince of the kingdom of Alexandria that we get to name. Since he has the aspect of the classical rm2k3 hero Alex, I decided to name him... Axel! The other companions that the prince will meet all bear the classic rm2k3 heroes names (Carol, Falcon, Gomez, etc...) anyway every city has an old man that lets you rename the party members as you wish, and he is usually found in the inns. But besides the inns (where you can rest restoring completely the characters, while "recovering" on the maps just recovers hitpoints using automatically the character' healing skills), two other important locations, besides the typical shops for gear and consumables, are the pub and the church: the first is the location where you can change your party composition (that is limited to four characters, as usual), even if you can NEVER drop the hero protagonist. And it's also the place where you will find your first three party members (so go there immediately after you start the game! Hint, hint!) while to get the extra ones you have to perform some optional quests.
Then there is the church, where the priest acts as save point and also place of resurrection in case of death of all party members! 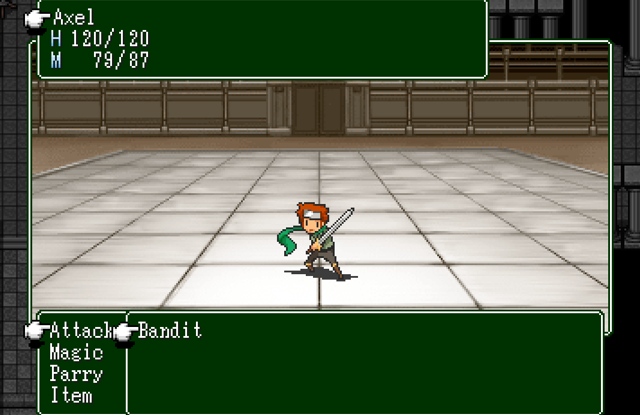 The enemies surely look cute, but do not underestimate them!!! Oh yes this is a duel! One against one, at the Coliseum.

The game consists basically in exploration and combat, and let's start with combat: except for bosses and hidden bosses, enemies are all met through random encounters, an annoying classic, but luckily the rate is not too high (and you can also tailor it as you wish!), and I noticed it's almost always possible to run away from the hostile creatures. In any case combat is simplified: most characters have just a single skill, for example the warrior has "Protect" and the thief has "steal", and the only exceptions are the spellcasters that learn new spells (that requires spending mana points to cast, of course) with level ups but are usually weaker and with equipment restrictions (another special case is the hero, that can learn spells from the artifacts). They can also attack, defend or use items, like in other classic jrpgs, but there are also some consumables that give permanent upgrades to one of the stats of the party member you will select.

And, like in other similar games a good idea is interacting with everyone and everything: you can get lots of items rummaging in various containers, from vases and barrels to wardrobes and drawers, so don't worry and check every crate you see! Also speaking with people you can learn useful info and in particular cases even get some quests. Exploration is often rewarded, because there are optional dungeons and quests with additional loot that may even be hidden in the scenery (of every map, including the world map too!), invisible, but you may find those items only because the tile is considered "occupied" (even if it's identical to the others that represent normal ground/floor!). 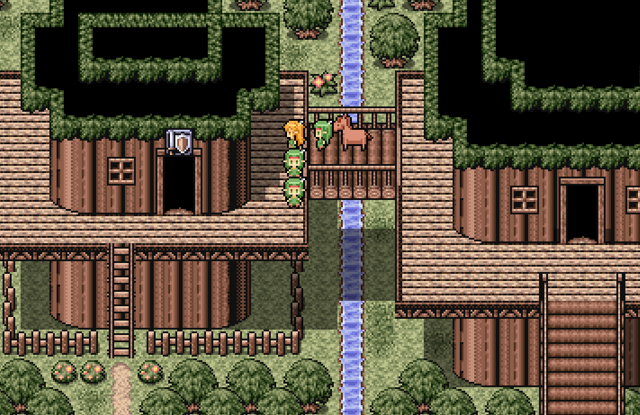 What? FIVE party members? Why the party here consists of four elves and one horse? Play the game and see!

Visually the game looks inspired by the Rm2k3 fantasy games because the characters are all similar, even if the world looks smaller and cuter (not only characters, but also monsters are especially cute). The maps are very colorful, and full of nice details, I liked the layout of the castles and the cities, because they feel of the right size, and there are no huge empty and shallow maps, a typical error of most Rm2k3 jrpgs (even if I was a bit disappointed to see that in the ice cavern there is no slide puzzle and you may walk on ice and snow boulders without problems! They're just decorative. The fire caverns instead have lava that can hurt you!).
Music is also pretty good, there are some familiar tunes (rm2k3 stryle!) and others I have never heard before, anyway they are good and the nostalgia effect is great!

But the beauty is not just for what concerns the aesetic, but also some nice touches and details: Falcon mentions that his little sister is ill, and in fact you can find her in one of the houses, or that that you can enter every well of every village. An a last funny details is that the main hero can always answer yes or no, no matter the question that they ask him, leading to some humorous dialogues.
It's a fun game, and I especially liked the quest to obtain the ship, totally necessary to open the exploration of the map (but not enough to go evrywhere! Mind this!) and finish the game! 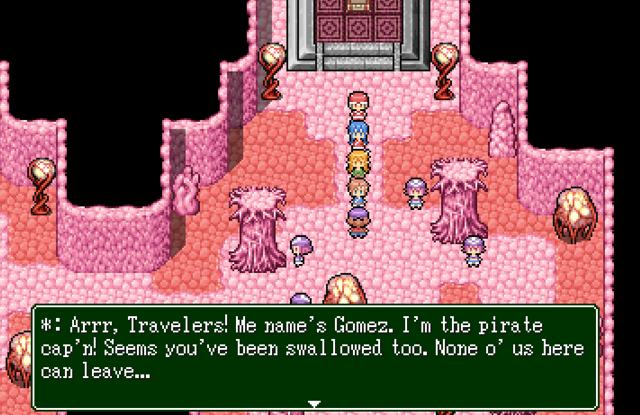 The journey will take you everywhere, including *inside* a giant sea ​​monster! Even if the strangest thing is that all pirates except the leader are women!

FINAL VERDICT
EXCALIBURIAN is clearly a game of the past but with a personal style full of details that is a lot better that the old RTPs that inspired it. But don't let the cute appearance of the monsters made you think that this is a simple and easy game! While random enemies aren't particularly threatening, bosses are difficult, and there are also some quests that requires a clever use of abilities and resources. The main problem is that you are free to travel everywhere so you may find yourself in one deadly combat (that Bahamut!) you cannot win because you aren't ready (and that's a problem considering that the save points are only inside temple and churches)! Another little problem is that spells have NO descriptions during combat but only if you check them outside of it, so while some are clear (you can distinguish a Fire attack spell from an Ice attack spell just from the name), I had to remember the cleric spells because they have generic names (such as "Love"... I mean, what do you expect? A charm spell? NO! It's a multi-heal ability! And the "Refresh" spell? Well it's basically an antidote for poisons, but could it not be called just "Antidote"?)

But these are the only real flaws beasides maybe the lack of originality, because for the rest this is a sort of revamped old-styled generic jrpg game (it even uses the Rm2k3 font already seen so many times!), that's obviously both an homage and a parody of the genre (and of the classic rpgmaker characters, if you notice their dialogues). For this reason I cannot help but love it, and I must admit I found the game pretty addictive: exploring every corner for treasure, recruit new companions, and travelling to unlock and complete new quests is fun! And there are also options to alter the encounter rate, set the auto-run and other little features missing from the old games.

Despite the "generic" story, it's a little gem, visually pleasing and very fun to play!

author=Rouhana
Thank you so much for the review! I'm glad you enjoyed the game.

Yeah the gameplay is good, the graphics are excellent... but the idea to resume Alex & co was also awesome! :D
Pages: 1