1 reviews
Save to Dropbox
Triple Triad: Tournament of the Elements is a side project that I am currently working on that serves as my last hurrah to fan games, rips, etc. I aim to finish this side project during the month of August 2021 while my main project, Penumbra Crystallis, is put on hold.

Players choose from one of thirty selectable established Final Fantasy characters to be their avatar in a game world where a deity named Dionysos, a god of revelry, pierced through the multiverse to invite characters from all universes to come and play Triple Triad in his Palace of Revelry with the promise of a grand prize to anyone capable of winning all six elemental tournaments. There are no battles, no levels, just CARDS!

Players can enter card tournaments, practice in their team headquarters, interact with many NPCs (who will either play cards, offer side quests, or just chat), or engage in side activities such as an extensive Final Fantasy trivia game or search for Gilgamesh's weapons which have been scattered throughout the Palace of Revelry. Cards can be won in matches, purchased, or acquired through activities/quests. They can even be sold for gil in order to buy booster packs!

While this is primarily just a fun thing I wanted to do in my spare time, which I wasn't even originally going to post on RMN, it is also a game and I hope that it is one that my fellow Triple Triad junkies will appreciate!

- Six card tournaments to enter.
- Thirty characters to choose from.
- Over one hundred opponents to play cards against.
- One hundred and fifty trivia questions to answer.
- Three hundred and sixty cards to collect.
- Several secrets littered throughout the game world!​
- Countless hours of card gaming action!

Triple Triad: Tournament of the Elements is now completed! This is probably the largest project that I've ever finished within a one month timespan. This is a love letter to all things Final Fantasy and Triple Triad. Kind in mind that it is a quirky little side project and is not meant to be a "serious" game by any stretch. If you just want to play some Triple Triad, this is the game that lets you do it!


Head on over to the downloads section to give it a go! And please feel free to drop by on Discord if you have any complaints, bug reports, or anything else that you'd like to share:

Hanging out in the main hall.

Jihl on standby to greet newcomers.

Close
08/18/2021 05:32 PM
Oh cool! This kinda of reminds me of when Pokemon back in the day made the Pokemon Trading Card Game spinoff for the original Gameboy (which I absolutely loved! And that’s how I also figured out how to actually play the god damn card game for once, which none of my friends, at the time, knew how to play, lol).

The plot sounds hilarious as well. I would imagine that the majority of the Final Fantasy characters wouldn’t like getting ripped from their own worlds and / or universes just to play a little silly card game with the promise of a mysterious grand prize hanging in the balance. And I would absolutely love it if the final opponent in each of the six elemental tournaments are the main villains of the Final Fantasy games, lol.

A couple of question for ya, but is there going to be any sort of story in this game? Or it is just mindless Triple Triad battles? Also, are any of the different rule variations, like in Final Fantasy 8, going to be in here as well, like the Same Rule, the Random Rule, Plus Rule, and the Elemental Rule? Or is it just standard Triple Triad rules? Also, are any of the Blackmoon Prophecy characters going be in here as well? (Maybe other Square-Enix properties or Final Fantasy fan-game characters?)

Either way, this looks like fun and I wasn’t expecting you to make and announce something like this. (You’re just full or surprises, aren’t ya?) I’ll have to give this a go after I finish playing and reviewing the next game that I’m currently playing. But for now, I’ll give this a game a subscribe!
UPRC

The rules are open, same, plus, combo, plus wall, same wall, sudden death. Card exchange rules are one, all, indirect, and none.

There is a loose story, but it's not super serious. It all ties into winning the tournaments and seeing what the supposed mystery prize is. As you win tournaments and become more revered as a good card player, you'll also wind up making rivals along the way.

Tournaments are made up of five matches each. As for who the final matches are in each... well, you may or may not be right with your guess!

And no Blackmoon Prophecy presence at all. You may see some of my FF6 edits from Black.oon Prophecy II here and there, but there are no fan game characters in the game. 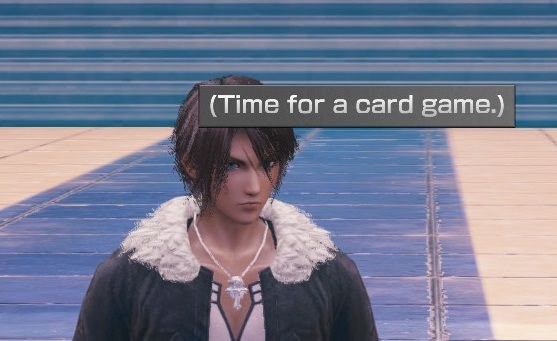 i'm so glad his plan to rope everyone into one place and win their cards has worked, good for him
UPRC

It was actually Triple Triad in Final Fantasy XIV that gave me the idea to do this side project. Still hopefully on track to have it out at/by the end of the month.
richterw

Finally though, I've penciled in September 6 as the release date. There's only a few things left to do, and I've got all day Sunday to get it done. Should be ready in time!
goji


Next step is to GET GOOD. Love this project!
UPRC

Close
09/07/2021 07:54 PM
I'm glad that you've enjoyed it so far! I was sitting at work grinning whenever you walked onto a map and got excited over seeing recognizable characters, haha.
djbeardo

author=djbeardo
This is fun! I put a Triple Triad minigame in my own game, but it's great seeing it fully fleshed out.

Thanks! Glad to hear that you're having fun!
UPRC

Tournament of the Elements 1.09 (September 15, 2021)
- Gil icon was missing in gil window in top right corner of screen when opening menu. Added this icon back in as it was unintentionally removed.
- Repositioned some wooden sign graphics due to being 1 pixel off from intended position on screen.
- Slightly recoloured the "$" sign in card shop/east wing.

Tournament of the Elements 1.08 (September 13, 2021)
- Fixed a minor text issue with one of Y'shtola's side quests that could have resulted in confusion on the player's part.

Tournament of the Elements 1.06 (September 9, 2021)
- Fixed a teleport to Costume Parlor that was triggered by key press rather than touch.
- Fixed a tile passability issue on the Verdant Park map.
- Fixed numbers on Eiko's card which were entered incorrectly.

Tournament of the Elements 1.05 (September 8, 2021)
- Part of Caith Sith's belly shows before he is supposed to be visible in Promenade Cafe.
- Deleted a test event that I had forgotten to remove that changes the player to Cecil.
- Vivi had some of Yuffie's dialogue if player was a member of the Alexandria HQ.
- Recycling Dark Elf cards resulted in incorrect text displaying.

Tournament of the Elements 1.04 (September 8, 2021)
- Corrected issue in trophy room where trophies did not incorrectly reference player character's name.
- Fixed win/loss dialogue of Melrose NPC (her lines were reversed for winning and losing).

Tournament of the Elements 1.03 (September 8, 2021)
- Fixes an issue with Helga in the Market Exchange. Game would soft-lock if you won or lost against her due to no card exchange rule being set.
- Fixed a small typo at the start (Jihl mentions Dalmasca HQ, should say Gridania HQ).

(And it doesn't look like my Antivirus deleted it from a false positive, as happens sometimes. Unless it's lying about its history, or Windows itself did it.)
UPRC

author=Varn
Am I blind, or is there ... not actually an executable in the current download? The closest I see is an index.html, that just tells me to report an error.

(And it doesn't look like my Antivirus deleted it from a false positive, as happens sometimes. Unless it's lying about its history, or Windows itself did it.)

Archive looks fine on my end. There's a chance I may have uploaded the project folder instead. I'll reupload it now.
Balmung
0

Close
09/19/2021 10:17 AM
I'm playing 1.07 and I noticed that Ultimecia doesn't appear after you defeat her in the tournament. Was it some kind of oversight or is she not programmed to appear at all in any of the areas?

Also, is there a way to save while playing the last tournament? It's rather frustrating to keep resetting when you get beaten and there you have to go through the whole tournament once more.
Varn
0

Oh, and you get to save after fight #4 of the last tournament. Takes a little luck to not be blindsided by the #@Q%^2@^!!%@ combo rule before then, but it's (eventually) doable.

EDIT: Did "the Costume Shop" actually open "South of the West Wing" on winning? There's certainly not a new exit south of all the HQs - or an obvious new shop anywhere?
Balmung
0

Close
09/19/2021 04:12 PM
I finally managed to beat the last tournament. However, there is no costume shop for me as well. Additionally, I tried to go back into Dionysus' chamber for the treasure chests and found myself facing the final boss again. Is this a switch failure for both the costume shop and entering the doorway to the second chamber?
UPRC

author=Balmung
I'm playing 1.07 and I noticed that Ultimecia doesn't appear after you defeat her in the tournament. Was it some kind of oversight or is she not programmed to appear at all in any of the areas?

Also, is there a way to save while playing the last tournament? It's rather frustrating to keep resetting when you get beaten and there you have to go through the whole tournament once more.

Ultimecia is there. There's a guy in the Main Hall who mentions the Magus Sisters. Find them and you'll find Ultimecia.

I'll see what's going on with stuff at the end not working. I had no issues, but I'll poke around after work today to see.
Balmung
0

Close
09/20/2021 07:53 PM
I just downloaded 1.10 and played through the final boss again. Now I'm getting a black screen after the final boss gets beaten in the cutscene. While I can move, there is no way to see anything. Is there any way to fix this?
Pages: first 12 next last