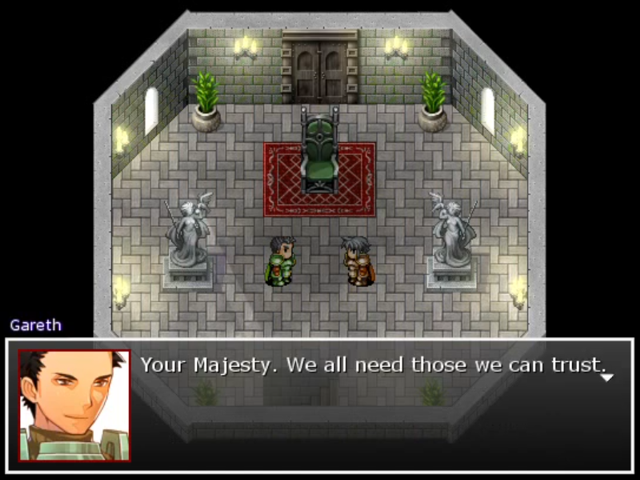 Oh yes, with that face you look *extremely* trustworthy! Yeah sure!

Welcome to Bloodstained Hands, a new fantasy rpgmaker game made by Strak!
And then you will probably ask me "Is this another fantasy party based jrpg?"
Well yes... but no!

Bloodstained Hands introduces us to its own original fantasy world with the rising of a tyrant the replaces the old king. Then we meet the protagonist, Rain and his brother and friends, whose life seems to go well... until the soldiers of the new ruler enter the village. Without telling much, only Rain escapes capture with the help of a mysterious guild of assassins that seems to be opposed to the evil tyrant. And they give him little choice, die free or live and become one of their agents. Guess what the good Rain will chose? Well it's easy, he's thirsty for revenge and he also wants to see his friends again...

And this is when the real (and the player's) adventure begins! We start choosing the protagonist's new name (or battle name, default is Fang), assassin class (there are three possibilities so you will get the starting ability, all specializations of the assassin job), and starting weapon. There is also the obligatory battle tutorial that will also teach how to run away from combat. And finally lockpicking! The game uses a minigame, a system visually and mechanically really similar to the one already seen in The Elder Scrolls V: Skyrim!
And this is just one of the many minigames available, for example you can also play games and gamble inside the taverns, if you really want! 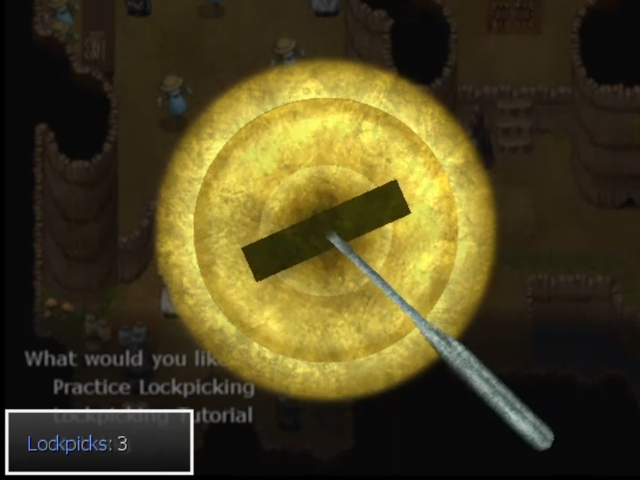 Come on, learn to pick some locks! And do not waste those lockpicks!

Ok, but after so much training (well Rain was not a professional warrior nor your typical predestined hero, of course!) it's time to undertake the missions that the mysterious and masked guild leader will give to his new assassin!
But a lone man cannot do much, so expect to create a small squad of skilled men and women to fight against the evil oppressor... but are they and their guild really better than the enemies they are facing? And is their master human at all?

Bloodstained Hands is for some aspect a classic fantasy jrpg: expect travelling through forests, dungeons, deserts, snowy lands, and on the world map facing random encounters, exploring the various levels for hidden loots, fighting boss encounters, and rest and restock at the villages or cities before starting the next mission of the guild. Oh and remember to save sometimes, since there are no save points, and you can do that anywhere and anytime!

But let's go back a bit: I mentioned random encounters, but how is combat?
Rather classic: we have have normal and special attacks, but there are also some Overdrive super moves that can be unleashed only after the relative Overdrive bar is filled, and each character has more of one kind of these moves so you can choose which one to unleash, depending on the situation: these aren't in fact all attacks (ok, many are, still they can be different kind of attacks so some are more useful depending on the opposition!), some may instead offer buffs or protection to the allies, one even refills the Overdrive bar, and this may let you unleash the same move two times in a row! (the first when the bar is filled, the second using the ability to refill the bar immediately after it was depleted). That was pretty cool, and strategic too!
A detail I noticed is that the game always shows the health level of the normal opponents, but NOT those of the real bosses, so you are kept on your toes, not that also some non-boss enemies cannot display some strange ability or quirk (like heal themselves summoning allies). 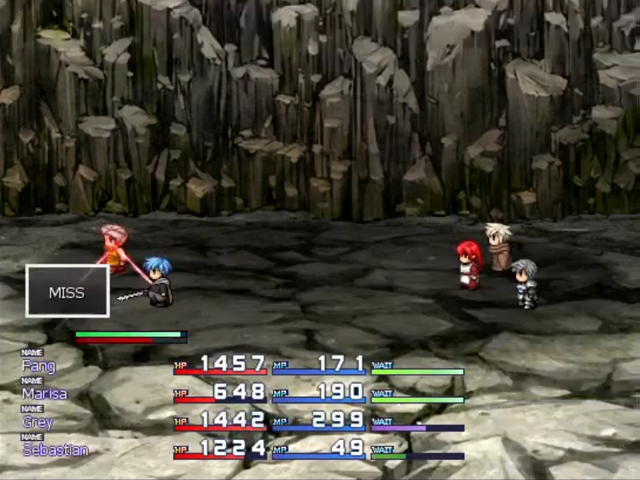 Oh no, he dodged, luckily my companions will finish him! What? Four against one? Yes! We are assassins, not heroes of those fairy tales!

But you may be tired of fighting sometimes (I mean there are random encounters, but there are also some mandatory fights, and not just the boss encounters!) so feel free to keep the escape button pressed and endure the blows that you will probably suffer before escaping. It's a cruel world, I know, and do not expect to find lots of consumables anywhere, nah they are bought in the shops (but luckily the assassin job is one that won't left you pennyless, so do not worry too muuch!). In the wilderness you may find some herbs that may be useful (well sometimes they are, others just marginally) but can have some side effects. So trust me, rest, check your equipment and travel healed and well equipped!
Anyway mind that there is night-day cycle, so you will find the shops closed during the night and open during the day, a cool interesting feature rarely found in other games that contribuites to the realism of this game.

Now, I said travelling, so let's speak of the place and people you will see: the game uses a classic RpgMaker Vx style, maps are made with Parallax Mapping techniques and well it shows because they are simpply beautiful, colorful and still realistic and believable! The world is a low fantasy medieval one, and the villages, towns and regions positions are also important to the development of the story. Characters are also edits and they fit perfectly this little realistic world, and the most important ones also have matching portraits with different expression, a detail that is always appreciated! My only complaint was just in a couple of spots, for example the jail tower, where the central pillar sometimes made me difficult understand where I had to pass, or some parts of the world map that look a bit dull and generic, but ok, these are just minor observations!

Did I forgot something? Oh yes the story! This game is a 20 hours great adventure, not a really fantastically epic one about good versus evil, but a serious and mature one where not everything is black or white, good or bad! And I am happy, because in the beginning from the title I feared I was going to play an extra-edgy game, but trust me, that's not the case!
The story is largely linear, anyway it's really well made (ok there are some odd things, like how Rain and brother never ever noticed an assassin guild located exactly in the well few metres from their house? These assassins may be real ninjas, still... a bit extreme!) and there are a lot of extras, like side quests, optional minigames and even a New Game Plus mode! But I spoke to much and I don't want to spoil the fun of discovering what happens in this great adventure game, so let's go to the conclusion! 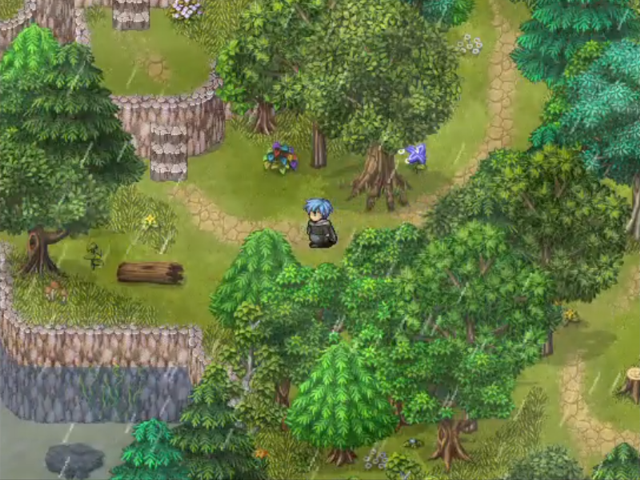 It's raining... men? No, something really worse, and well at the time I was NOT prepared!


The Final Verdict
Ok, I've said a lot but there is much more I could say about this beautifully and carefully crafted game(because this is the case, and it's also constantly improved and updated with new versions) with lot of attention to the details: there is a bestiary collection of the monsters encountered, there are many options that can be adjusted to your preferences, there's crafting... and much more! But that' enough, ok it's not a perfect game because of some really minor flaws (for example I can't personally love the random encounters choice, and I prefer the "avoidable enemies" running more or less wildly on the maps), but it goes near. It's very good, and extremely good if you like the genre, so try it! You won't be disappointed!

Close
10/17/2021 03:51 AM
Wow! Thanks so much for the review! You caught something that I've never actually explicitly stated, either in game or in comments, but I'm glad you noticed. Yes, the heroes of the story are not superhuman demi-gods who can destroy anything with one shot. They're human. They have human weaknesses, and they need to work together and use different strategies to overcome their foes without dying or suffering serious injury. I wanted to make a project that defied the typical JRPG cliches while still staying true to the medieval fantasy genre. Thank you for noticing, and thank you for the review! I'm glad you enjoyed the game.

And you've given me a lot to think about for future projects. I'll be sure to take your feedback to heart.
TheRpgmakerAddict

author=Strak
Wow! Thanks so much for the review! You caught something that I've never actually explicitly stated, either in game or in comments, but I'm glad you noticed. Yes, the heroes of the story are not superhuman demi-gods who can destroy anything with one shot. They're human. They have human weaknesses, and they need to work together and use different strategies to overcome their foes without dying or suffering serious injury. I wanted to make a project that defied the typical JRPG cliches while still staying true to the medieval fantasy genre. Thank you for noticing, and thank you for the review! I'm glad you enjoyed the game.

And you've given me a lot to think about for future projects. I'll be sure to take your feedback to heart.


Yes, the story is very realistic and grounded, not the typical "Chosen hero go to defeat evil and kill demon king", and this means that there is also some politics involved, for a more mature storyline.

With this occasion I stress a thing I forgot to mention in my review: the difficulty is challenging but fair (and this is NOT that easy to do, especially when I play games with random encouters), I mean, I failed when I was not prepared, otherwise I did not thing I found the game frustrating at all, even if you aren't exactly showered with items and resources... but you have enough money to compensate, so it's ok! And you have also a plethora of optional settings, so... good one!
I'll wait for the next projects!
Singularity
0

Close
10/22/2021 02:28 AM
I don't understand why this review doesn't mention that the game implements a day/night cycle. Time pressure elements like this one make the game unplayable for me, even though it looks promising. Maybe you just forgot to mention it because you had played too many short crap games recently.
TheRpgmakerAddict

Close
10/22/2021 04:16 AM
Oh yes, I noticed but totally forgot to mention that (at first I believed it was scripted), good call will correct this. But even unplayable? How??? Nah not at all (try playing some games with more restricted saving options and more difficult combat encounters), on the contrary it was another cool feature that added to the realism of the game, but nothing else!

Yeah recently I played crappier games, shorter games (but also longer ones like Story of Integra), harder games and also really unplayable ones (so if this is better than them it deserve the rating I guess).
Not this one.
Pages: 1