0 reviews
Save to Dropbox
STORY SINOPSIS
You're Tomato, a gunslinger who due to bad luck get stranded in a town in the middle of nowhere. Fortunately for you, the townsfolk generosity understand your situation and set up some way to keep you occupied.

After negotiating with miss Lettuce, you set foot into the mines, and start delving down into the mysteries buried deep inside.

I don't know, I need some sort of greeting and that's all I got now. This is the first blog entry, and so there's a lot to say, maybe. So let's start with the basics. What this game is all about.

First off, I've released a demo as part of the Theme Roulette 4 event, as this project started there. Go check them out! I can wait (?).


As you might have guessed from the game title, it's a mystery dungeon type of game. That means is sort of a roguelike, or maybe a roguelite. There is a dungeon to explore, randomly generated, you can get stuff in there, you fight on map, battles are sort of turn-based (enemies move only when you move, if you don't they wait). Those are kinda the basics I went for.

Some of these basics I still have to polish, like the dungeon generation algorithm, it sometimes spews disconnected rooms, which is a no-no. I must update that part of the thing. Other stuff I already know I want are traps, and of course, good damn loot!


There are other stuff I'm considering, especially because this game is heavily inspired by two things: Azure Dreams and Rune Factory. You might be able to see some of Rune Factory 4 especially in the menus. 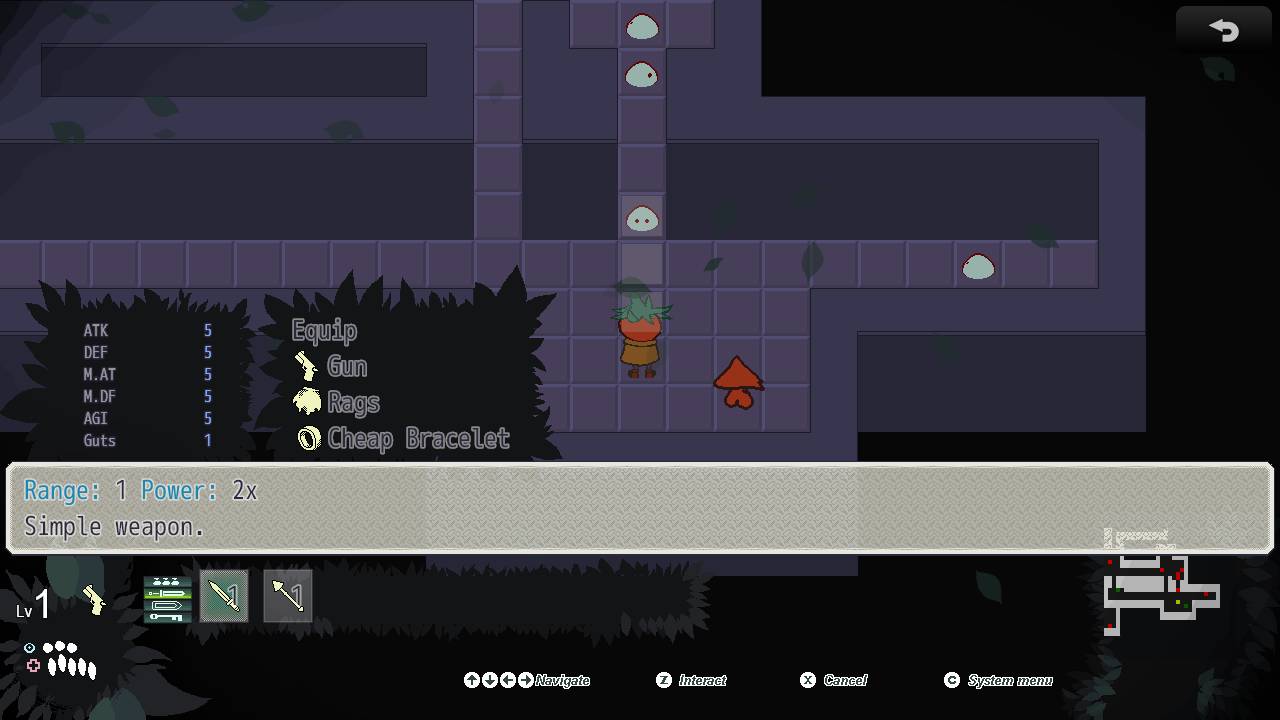 
The main stuff that will be added at some point in terms of mechanics will be the monster catching. I love that from Azure Dreams, and the little I've seen from RF4 (at Muffle's streams) also looks nice. I mostly want something more like Azure Dreams (I'm considering options for the fusioning, I've already done a plugin for that before tho it's a bit more indepth than what I'd like so might redo the fusions from scratch again...), but having a barn where you can interact with your mons sounds nice too! But we will see... The barn is already mentioned in the TR4 demo so that is canon, it will happen.


And that's basically it for now! Other stuff I'll be focusing now is giving each character their own artwork, and of course working on their overworld graphics, right now they're all just one static image due to time constraints. After that, will strive for having the first portion of the dungeon.

And that's it for now!


Now, before I go (?), some credits must be given. I just did a first iteration for the gamepage CSS template. Might not be needed, but thanks to this guy for his leaves SVG. Didn't want to make it myself, but wanted something like that, and the attempt I did with CSS wasn't good...
https://github.com/kylelk/falling-leaves

The thing is under MIT license so hurray! :D

You know what else is/will be under MIT license? All plugins from this game. So feel free to steal them or whatever. You can steal my art too, I don't mind. Just don't expect me to move a finger for you, I am too laz.

Music however, credit this guy: http://ontama-m.com/ongaku_rpg_event.html
And sounds, combination of https://www.freesfx.co.uk/ and https://freesound.org/. I'll eventually put that part in order because I think I kinda neglected it a bit and that's bad.

Another another thing! You know I mentioned the dungeon generation thing right? While looking for existing solutions, found this one https://aerosys.blog/procedural-random-dungeon-generator-instructions. I mention this because I had to take a bit of notes on some things there, specifically for the autotile algorithm. My implementation is based on something I once did for RMXP (yes, it's mostly the same despite all). But had to take note of some autotile indexes. I was losing my mind a bit with that. Anyway, just to get that off my chest.


See you later!
It is canon that the townsfolk were raised in a barn.

Defeet monsters with no feet.

Can you please stand a bit farther please? Personal space!

Close
09/22/2021 03:25 PM
Would anthropomorphic vegetables count towards "Year of the Deer"? I'm not 100% sure, but, lemme tag this game for that as a consideration for said award in the next update of the Misao thread!
Pages: 1