Hellooo
and welcome to Ghost Town! A Ghost Tale is a RPG Maker 2003 short and humorous adventure about Finn. Finn is a rather average guy that goes to bed and wake up un Ghost Town, meaning that... well... he died!
Since this is a new experience for Finn. he wants to know what happened, and luckily another ghost, the cheery and talkative Mina, decides to join him in his search for the truth.

A Ghost Tale is a classic adventure rpg (don't let the custom graphics deceive you!)... more combat rpg than adventure! It's a very linear experience in which our party goes from A to B, from B to C and so on... collect items, fight lots of random encounters and the mandatory boss at the end of each area. Sometimes you need to look for a particular item to proceed, but this is a rare occasion, while it won't be a rare occasion face against Zlep, a sleepy and annoying ghost that, to tell the truth, will be not very sleepy, but extremely annoying, providing additional challenges...
Not that we need more, since the random encounters are very frequent and more and more difficult as we proceed, luckily earning some levels out two heroes will develop some really useful abilities, from healing to elemental attacks that are very powerful and should probably reserved to be used against the bosses (I was able to one-shot the second boss with these!). 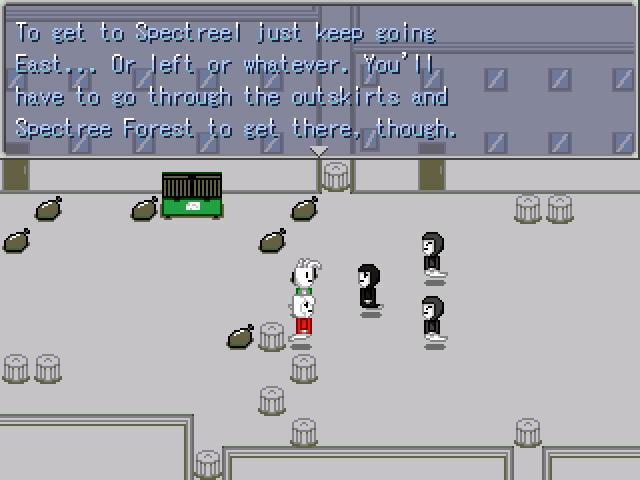 And here's in fact another problem: Finn plays the role of the fighter, and Mina of the mage, but they both use mana to fuel their abilities. Unfortunately there is a terrible scarcity of consumables, and considering the lack of shops you have to rely on the scarce loot found inside the boxes. Grinding is not an option, at least you can save anywhere and re-try if needed... but this is not an optional solution! I mean that a lot of games with a similar concept I reviewed in the past were more forgiving, offering lots of resources and consumables or even healing points inside the dungeons. Here I had Mina killed before she could act, because two enemies targeted her with their strongest attacks, and Zlep... ok Zlep!
Zlep has a sleep skill that send your character to bed, and ONLY a clock can be used to wake up him/her! Yes, while normally a successful attack wakes up the sleeping victim (at least on most Rm2k3 games and Final Fantasy too!), here this does NOT happen! And having both characters asleep is a guaranteed game over! Why????

Ok, now the good parts: the game uses RTPs for music and sounds, whilt graphics are custom. Mapping is average, ok nothing special and sadly extremely linear (you enter from a side and exit from another), also there are some charactes that aren't approachable (because they are surrounded by trash bins and other items) so it's a wasted opportunity for some humorous dialogues.
Speaking about humor, as usual you may like it or not, this is largely subjective of course! Story is super simple and short but not terrible, there are just four important characters, including the protagonists! 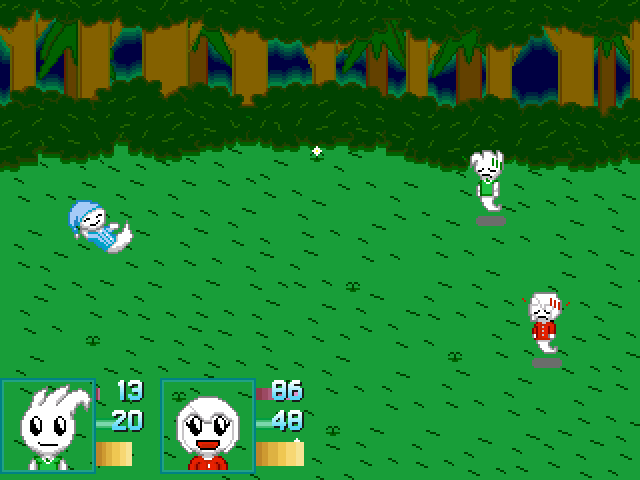 Ok, I just want to reload since both heroes are sleeping and will soon be dead. Again!

Final Verdict
Ghost Town is a game of contrasts: there are many nice aspects, and others that aren't nice at all. Like those frequent combat encounters... why everyone attacks Mina and Finn? They are already dead! All those smiling ghosts are suspiciously aggressive... anyway there are some parts I liked, like when Zlep "joins" the team, and other I hated very much, like the combat that happens right before that scene!

What I wanted? Less combat (a lot less, maybe even just the boss fights!) and more adventure, exploration and dialogues. Yes, even just more humorous dialogues with random and useless characters, just to entertain the player. But uhm, ok this is me, so why don't you give it a try?

Close
10/15/2021 12:43 PM
So, I read your review and after reading it... I realized that there are some stuff that I probably should fix in this game. And yeah, I will be sure to work on fixing those things.
But anyway, thanks for the review.
TheRpgmakerAddict

author=Paronfoil
So, I read your review and after reading it... I realized that there are some stuff that I probably should fix in this game. And yeah, I will be sure to work on fixing those things.
But anyway, thanks for the review.

Wellll I do not know, but try testing it, maybe from who developed the game everything looks easy and simple but from a player point of view... I'd add more items & shops!
Or weaker enemies!
Or less frequent random encounters!!
Or... well all of the above?? I dunno!
Anyway graphically is pretty and the basic idea is cool so, hey just some adjustement and it will be pretty good!
Pages: 1