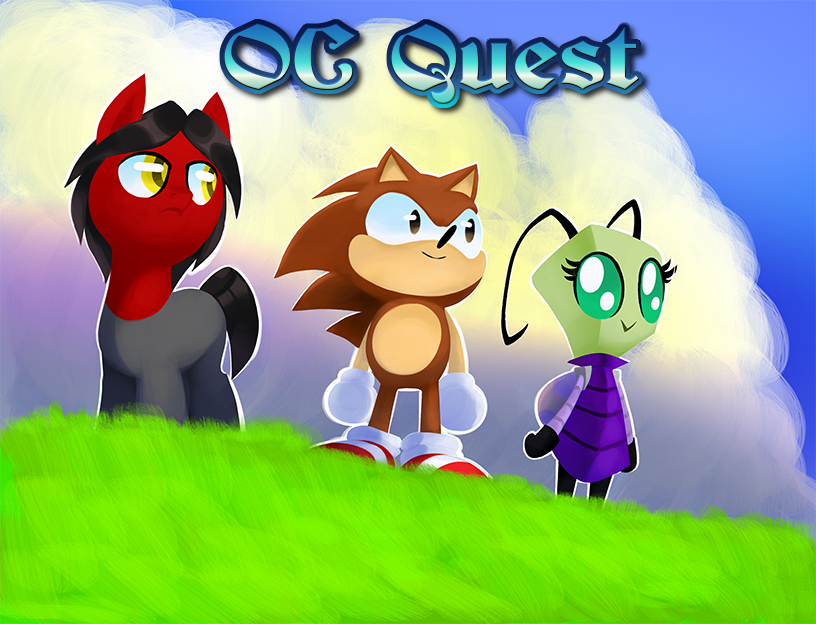 Due to the large file size, please download the game from Itch.io.

OC Quest is a satirical, metafictional crossover romp about fandoms, fan characters, and the existential boundaries of what makes a truly good OC, created using RPG Maker MV between February and August 2020.

Our story centers around a plucky young hedgehog named Nut, named (presumably) for his chestnut fur. After making a complete fool of himself in front of his idol, Sonic, he discovers from an annoying little android called Toadochao that he is an original fan character, or "OC", and is not supposed to exist within the Sonic canon. Now that Nut has achieved sentience, Toadochao whisks him away to the Fandome, a floating space station where OCs from all walks of life can mingle about for the rest of time without disrupting canon.

Not at all content with this, Nut vows to find a way out of the Fandom and find a new purpose in life in whatever world he may end up in. Aided by an Invader Zim OC named Dez (and her aggressively sarcastic SIR unit Six) and overly-grimdark My Little Pony OC Bleeding Edge, the ragtag bunch of heroes set out on a quest of self-discovery to prove they can be so much more than the sum of their parts... and things only get crazier and crazier from there.

WARNING: This game contains foul language, slightly edgy humor, and unbelievable amounts of cringe, and is recommended for ages 14 and up. Player discretion is advised.

This is the first game I've ever made, so please be nice. Constructive feedback is welcomed. A full list of credits and resources used + legal disclaimer can be found inside the ZIP file.