Return of the robbers!

Hello and welcome to the review that will probably be my last one for the 2021!
In june 2020 I reviewed a RPG Maker MV game called Meta City Heist (look here!) by MetaReaper, and now... guess what? MetaReaper is back with a sequel of the first game!

Uhm I do not know if this can be called "sequel": in the first game we played as a criminal named CJ that had a huge debt to pay, and now we don't care what happened to him (there was more than one ending) since we play as a new character, Hector.
He's an experienced robber that was just released from prison, and thanks to his friend Vince he plans to make lots of money and leave the city.

Hector start with just a gun, but that's more than enough to rob a store in the tutorial mission, anyway later heists will need more firepower, items and associates. We start each morning in the hub where it's possible to save (it's not possibile to save during a heist, of course), hire robbers (there are some familiar faces from the first game, like Silene, that seems to have dyied her hair, or Jacob... that looks identical to Jackson of the first game so he probably changed his name or he's a twin!) and buy useful items. 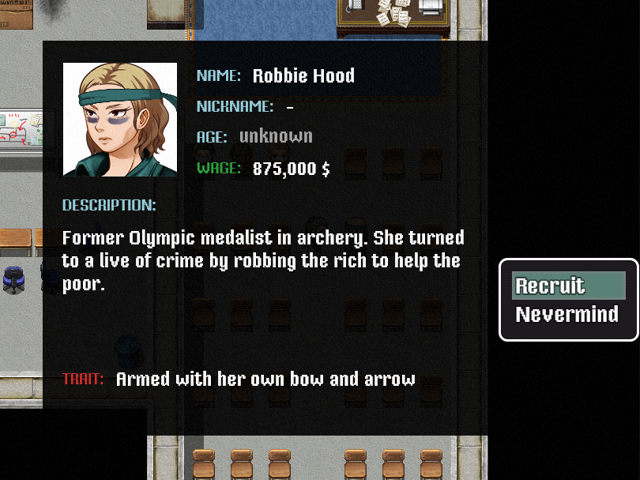 It's important selecting good associates, and some (like Robbie) have to be unlocked in some way. Now, why would I hire an archer?

The jobs are divided in groups of three of increasing difficulty and complexity, but there will be additional items and recruits after completing a triplet. Expect to rob banks, casinos, security vans, villas and even a church! Really, play the game and find out why, anyway there's no shortage of places to visit (and rob).
Once you begin a robbery you have to roam the place and study the place to plan the the best course of actions, anyway Vince usually gives some extremely good hints, so always listen to him before heading out and note which items may be useful.

As usual there is a rating that goes from Mastermind and decrease down to psychotic robber that indicates how well Hector behaved in a successful heist. Each place in fact may have several different ways in which it can be robbed (sometimes you can use stealth and cunning instead of brute force), there may be optional loot (that sometimes requires possessing some particular items) and of course, if you are spotted, there is time until the police arrives! 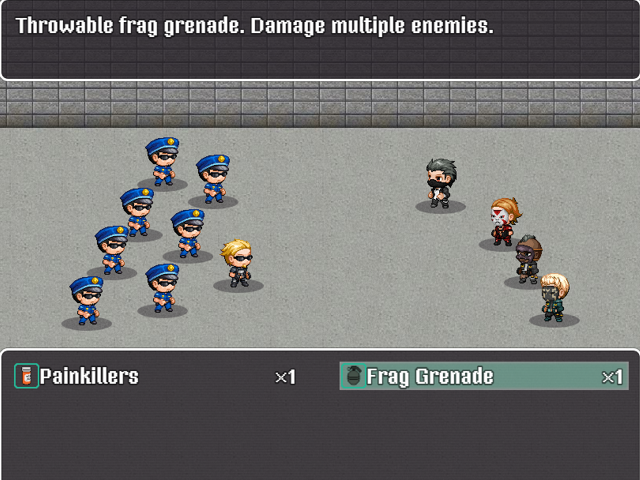 Oh no, it's the cops! Anyway I've a little present for them!

In this case (or whenever you start combat, with lawmen or criminals) the game shift in classical side view combat, where character may attack with firearms, use abilities (like unarmed attacks or skills unlockes reading manuals) or items. Combat is simple and straightforward, and the realism of the setting implies that there are no special attacks or magic spells of course.

Ok, this was also in the original game, anyway I must admit that this second episode surprised me for the many additions: not only there are much more heists, more items and allies, but there are also some additional features: you can play blackjack in the casino, you have to solve different puzzles in the villa... ok stop me, or I'll spoil the fun of discovery, anyway as you can see different and unexpected activities (like pushing "barrels" puzzles, more typical of an rpg adventure) are perfectly incorporated in this title that is an improvement on every aspect on the previous entry of this series.

Graphically there game doesn't add or detract nothing from the previous title, I mean it uses the same graphics but I do not mind since maps are fuctional and well done (probably also better than those of the first Meta City Heist), the modern chipsets and characters fits perfectly the realistic urban setting, and there is also more variety and quantity. Music is likewise ok because it consists in some sounds and simple themes, but perfectly fitting the genre. 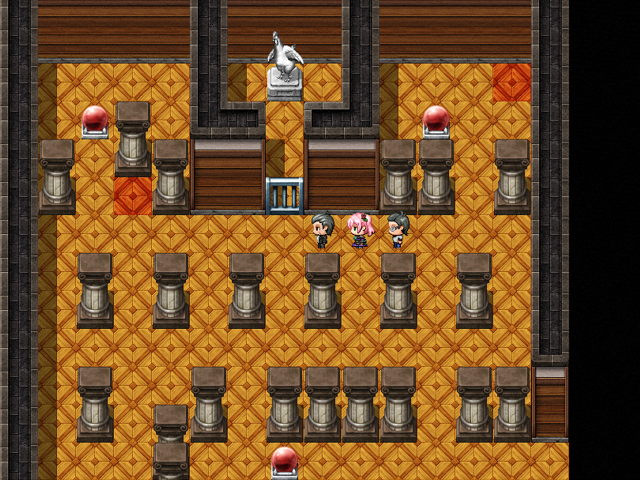 Hey guys, this looks like a puzzle. What a twist! Luckily you've the best puzzle solver in your team!

Final Verdict
Ok, this game can be considered an upgraded version of Meta City Heist, it's bigger, better, has much more things, secrets and collectibles, still the concept is very similar to the first one. But my rating this time is higher because the style of the game improved a lot. I mean, the first game was ok but a bit generic, here each heist seems a mini-story (that involves some named characters like the patrons, owners and other side characters), companions have backstories, and everything looks more detailed. Yes, the quantity of cool little details are those who made this game so special, from the loading screens with the skyscapers silhouettes, to the characters putting on masks (each one has his/her own) when the action starts.
But besides the details there is also a nice game to play, so go on, try it! Especially if you liked the first.

author=MetaReaper
Thank you so much for the kind review! :D

Thank ou for the reply. Many nice improvements over the first game, no one can deny this!
Pages: 1