0 reviews
Save to Dropbox
Story
Long ago, before the age of machines, there was a great calamity. A calamity that nearly destroyed the world. Humanity was at the brink of extinction, and a powerful new threat, horrific beasts known as Terrors, walked the land. However, there were some who stood and fought against the horde, the greatest of which being the often-forgotten member of the Satori bloodline, Treck Satori. A wanderer at heart, Treck travels the barren wastes of what the world has become, helping others and defeating diabolical threats. However, a new threat has emerged, one more deadly than anything ever seen before. A horrific monster made of stone has appeared, stalking in the darkness with it's shining blood-red eye. This beast has the unholy ability to turn whoever gazes into it's maw to stone, a truly horrific power with no known counter. The beast used to mind it's own in the Celice Ruins, but in recent times it has wandered out, expanding it's territory further and further and attacking the surrounding camps, turning all who witness it's horror to stone. This stone colossus became known as the desert fiend Karakal, and was feared across the land. However, a hero has arrived. Treck, the wandering hero, is now hunting down the creature, hoping to bring it's tyrannical reign to an end. However, there is more to this encounter as anyone could realize, as greater forces lurk in the shadows, all to bring forth a desired conclusion. A conclusion of destruction.

This game was made for the "Commonplace Book" event for RMN during October 2021 where you had to make a game based on a prompt from H.P. Lovecraft's "Commonplace Book," a book of his crazy ideas for new stories that never came to be. The original prompt that this game was based on goes as follows:

"An ancient colossus in an ancient desert. None have seen it and lived."

It's finally here everyone, v1.1 of Lost Colossus, now known as Lost Chronicles, is now out! This version adds many highly requested features for this game, such as multiple party members and better QoL. Here's a rundown of all the changes you can expect with the new version.

New Features
-Added in two new party members, Izzy and Vivian, the latter being optional.
-Added in a new area, Desert of Desolation - West.
-Added in a new town, Delma Oasis.
-Added a new mini-dungeon, Skull Entrance.
-Added 2 new difficult enemies, the Hell Wyrm and the Inferno Beetle, who are fought in the
Skull Entrance.
-Added a new major sidequest which rewards you with an optional third party member, Vivian.
-Added two new classes, Companion and Magi, for the two new party members.
-Added in the weapon and armor shops where you can get expensive new weapons and armor for your
additional party members and even Treck himself.
-Added in two shady salesmen in Delma Oasis, one who sells lewd armors and the other selling
seemingly useless "old gear."
-Added in Anna's Tip Shop to give you useful tips on how to progress.
-You can now upgrade rusted weapons at the shrine of darkness.
-Added 20 new skills for new and old classes, including:

-Added in 24 additional weapons, including:

-Added in 28 additional armors, including:

Changes
-Changed the final boss, Karakal, to be more difficult.
-Gave new AI to the final boss.
-Made it so that non-human enemies cannot crit.
-Slightly raised the amount of Bx you gain from all enemies.
-The Ant Boss has been made significantly weaker and now always attacks last.
-Lengthy tutorials have been added.
-Skills have been made far more detailed.
-There is now a countdown for the Rusted Jailer boss before he uses Robot Rampage.
-The Rusted Jailer now takes more turns to use Robot Rampage. (5 instead of 3)
-Changed the chances for arts to inflict statuses.
-Changed the descriptions of multiple skills.
-Changed the crit rate for certain skills.
-Changed various enemy stats.
-Changed various enemy shield amounts.
-Changed various enemy levels.
-Changed the names of most music tracks.
-A pop up now displays when you unlock a new skill.
-Dirt Paths have been added to most non-dungeon areas in order to ease travel.
-EXP gain had been completely rebalanced.
-Added a new title screen.
-Changed name of game to "Lost Chronicles" to fit in with the rest of the Chronicles Series.

Bugfixes
-All missing files have now been restored.
-The bad ending now plays successfully.
-Pym now properly disappears when the Kairos cutscene ends.
-All three animations for Kairos and his minions now play at the same time.
-Fury Slash no longer plays multiple animations.
-The QTE now displays properly.
-Fixed the password so that it no longer warps you when you get it wrong.
=Fixed the password door so it no longer disappears after entering it for the first time.
=Reraise now works properly and now actually revives you upon death.
-The necro weapons now properly inflict instant death.

I hope you enjoy the new update. Especially you Liberty! There will likely be new updates in the future, but nothing even close to this scale. Just bugfixes and balance changes from here on out, plus a special effect I really want to add to one of the endings that I think you all will find very cool. Anyways I hope you continue to play Lost Colossus and all the other games in the Chronicles of Chronicles series. Bye for now!
Welcome to the desert of desolation. Hope you like lots of sand and horrific eldritch monstrosities!

What a sad and lonely town. So many faceless statues...

The game over screen. Creepy!

Close
10/27/2021 02:18 PM
Just starting the game and going into battle I receive an error when using some special attacks. Seems like you didn't put some files in the release. 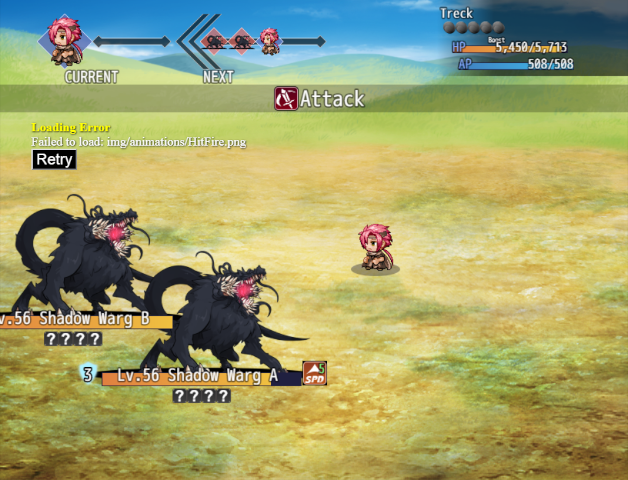 Close
11/01/2021 03:38 PM
@s4urr I saw your issue and I'm pretty sure that's fixed with the new update v1.0.1. The issue was that I used the "export without unused assets" option when exporting. In MV there's this weird issue where if you have an asset that is only triggered via plugins, exporting with that option will mark it as unused and not include it in the files, causing crashes. MZ fixed this issue, but in MV it will probably never be fixed due to MV's sloppy code of what I've heard. (apparently fixing MV's code was the main reason why MZ is a new engine and not an update + asset pack for MV)

So yeah, if you have assets that are only triggered via plugins, you'll have to transport the assets you need manually which is a pain, and if you forget something that can completely break the game. I just needed to copy paste the animations folder from the game files to the exported files and then the glitch should be fixed. Download the new update and things should be fine. I hope you enjoy the rest of my game!
mimella
0

Close
12/16/2021 01:37 PM
Found a few bugs in v1.1.4
When you re-enter camp9 the weapon and armour dealers become item dealers, and if you enter the oasis you are in the space above not on the road so you cannot reach the NPCs.
KrimsonKatt

Close
01/08/2022 12:22 PM
well cant even play the game tried too many time just first battle always get the error if i finish the battle i still get it any way cant find statedown file 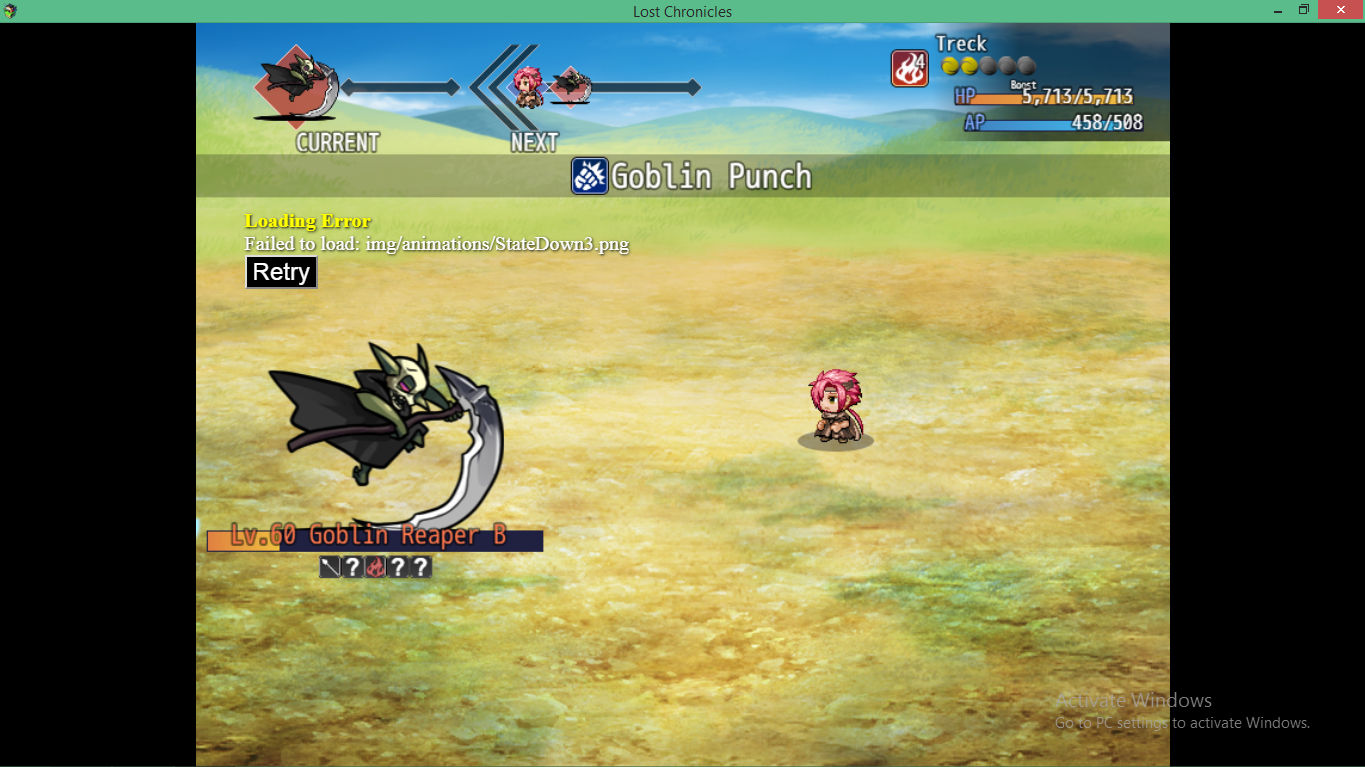 Close
01/14/2022 06:40 PM
I playtest these games again and again and apparently the same issues keeps popping up with missing files because of the badly coded "do not export unused assets" feature. Guess I just have to leave the unused assets in if this keeps happening...

Edit: A fix is on the way. Should be out within the hour.

Edit 2: The fix has been posted. You should be free to play now.
Waddami

The glitch has been fixed. (hopefuly)
Waddami

Close
01/17/2022 06:40 AM
I think you might want to remove the download and stop releasing newer versions for the time being until you know for sure that the game works properly.

I also did merge all three previous versions together (as I knew the missing file was in 1.1.5 for sure), and I got a different bug that occurred after a battle. 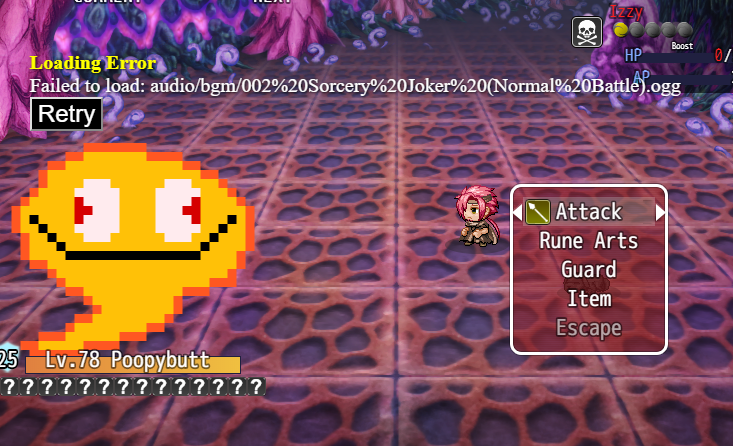 Close
01/20/2022 03:19 AM
Another glitch, great. And this is super late in the game (second to last room) so I didn't catch it in my playtest. (which played through 60% of the game) This glitch is a common one where a certain BGM filename is called but the game crashes because the file name has been changed. Have to fix this real quick. But yeah, I sorta came up with these bosses' names last minute. I couldn't think of a good name for the dumb orange one so I called him poopybutt because it sounds dumb, just like him. Maybe I should change them to the original names since they're based off the pacman ghosts? IDK.
Pages: 1