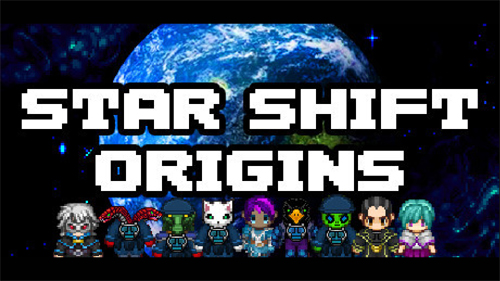 For potential release dates of our other games in the Star Shift franchise, check out my itch.io account for the details.

The year is 2357. Embroiled in a civil war, the fabric of reality is not what it seems. Humans have explored the stars and colonized many worlds under the authority of the Earth Systems Alliance (ESA), a government controlled by powerful interstellar organizations. An alliance in name only; it is, in reality, a brutal empire. The Earth Systems Alliance (ESA) is embroiled in a civil war with a faction known as the Novus Federation. They are made up of former ESA colonists, corporations, and military personnel who oppose Alliance rule and actively undermine ESA activities. Both sides have committed war crimes on civilian populations. This has destabilized the balance of power in the region, creating chaos.

Star Shift Origins tells the story of the first crew of the Dauntless before the events above. Trapped in an alternate reality and on the run, the crew desperately searches for answers while being hunted by the relentless Earth Systems Alliance (ESA).

Star Shift Origins features a turn-based active time combat system with a maximum party size of 7 and multiple playable characters. There are no levels in Star Shift; skills and stat increases are managed by Knowledge Points acquired from battle, which are used to gain new skills and increase stats. Victory in combat relies on the player being strategic in order to achieve the desired outcome.

In addition to the standard turn-based combat, Star Shift Origins implements a tactical battle system for fleet and army combat.

Star Shift Origins implements a complex skill tree system. Customize your characters with unique skills and abilities. Increase stats through passive skills and learn active skills. Unique skill trees exist depending on the species of the character, as well as their class.

Time has been shattered; only you and your crew can unlock the mystery and correct the damage—before it's too late!

An incredible soundtrack from multiple independent artists to keep the player engaged and in the moment.

Star Shift (In Development, with Demo) on Steam!
(Windows, Mac, and Linux)