0 reviews
From the creator of classic RPG Maker 2003 title, Zephyrus and the Kingdom of Heaven, winner of the 2006 best storyline Misao award, comes a complete overhaul of the original game and all its stories, starting with the very beginning.

Ancient enemies. Deadly secrets. And the wrath of gods.

Joshwa Asa, a soldier blindly devoted to his gods, is on the verge of losing everything he’s trained for. To make himself worthy to his superiors, he takes on a mission to infiltrate enemy territory and obtain a sacred code that could bring humankind closer to their Makers. But when secrets long buried are unraveled and a deadly cult will do anything to keep them hidden, Joshwa must question his beliefs and find the truth before the gods send flames of mass destruction.

In Elohim Eternal: The Babel Code explore a vibrant world where ancient religions fuse with technology in this character-driven JRPG. Master deep turn-based combat as you battle with divine magic against beasts with mecha parts. Embark on a grand adventure to retrieve the sacred Babel code needed to come face-to-face with your Gods.

Elohim Eternal: The Babel Code is a 10-12 hour game with gear, lore, and artifacts to collect, varied enemies to battle, story-driven side quests, and different landscapes to explore.

Hi there! Hope you are doing well and staying safe!

I'm excited to bring you a digital booklet ahead of the game's release that goes in-depth on Elohim Eternal's world, mythologies, characters, enemies, and gameplay mechanics. 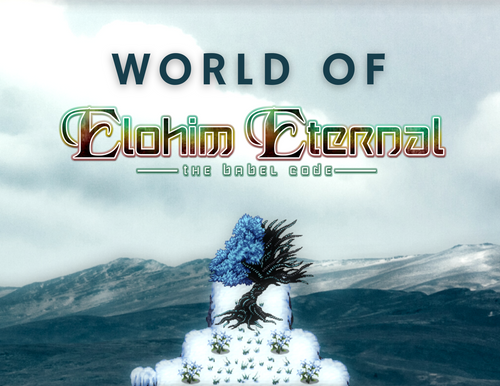 This booklet is complete free. All you have to do is tell me where to send it by following the link below:
https://landing.mailerlite.com/webforms/landing/c8c3u4