Helloooo everyone and welcome to the review of...
Broken Mirror, a 50% cute and 50% scary short scenario by Ikoru, the author of Abdogtion. This is a short but complete game that you can probably finish in exactly ten minutes, anyway it is important to mention that this game was made for the Theme Roulette 4 (even if this review concerns a slightly improved version compared to the version submitted).

The basic premise is simple and classical: some people disappear in the deep of the forest and a couple of boys are curious and the bigger one challenges the other to go and see what happens there. Of course the little one agrees and so start a dark adventure in the deep dark forest.
But wait! I forgot to mention that these two unnamed protagonists aren't really human: the larger one looks like an orange hamster, the other is a winged mouse, really! Anyway if you played the other Ikoru's game you can probably expect that even if there are cute protagonists the story may be serious and even scary... 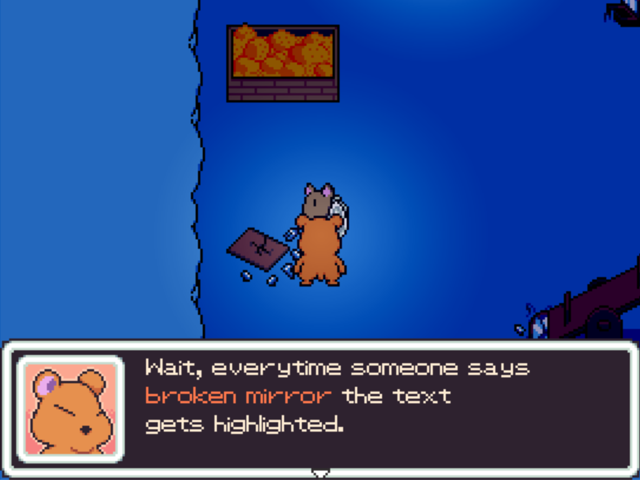 If you are familiar with Abdogtion you will probably notice how the setting is similar: a small town populated by some anthropomorphic animals and some "full-animals" like the dog (that is a dog exactly like the dog of Abdogtion and not a humanoid dog like the protagonist), there is even a shop that has no real use because in this game there are no items or stats, you can still enter but it's a map that has no use and can even be avoided. The graphics are really well made and evocative, I mean this is a dark game despite the colorful cartoony superficial appearance. Sprites and facesets fits the environment perfectly especially because here (unliked the previusly mentioned Abdogtion) there is not use of different techniques but just pixel art. Maps are also well though out, and while there aren't not many locations all of them are evocative and nice ly done, the only problem is maybe the absence of description and interactions with some parts of the scenario (or even creatures) that are useless but would have been a welcomed addition to the detailed locations. Finally lightning is used well, and the same is for music, that for the most part consist in ambient sounds, unintelligible groaning/grunting of the characters (that accompany their dialogues) and a nice final song that closes the game after the end. Minimalist but perfect for a short horror game like this one.

But what are you going to do in this game? Well being this an horror and not just a walking simulator expect puzzles and classical chase sections, all of these are rather simple (the kicking puzzle makes a return from Abdogtion, and I welcome this idea since it was one of my favourite parts!) also because they take part in a small area. It's linear and easy and there is probably no chance to be stuck anywhere, but despite this aspects the game is interesting to play due to the mysterious atmosphere and crescendo of dark, creepy details. 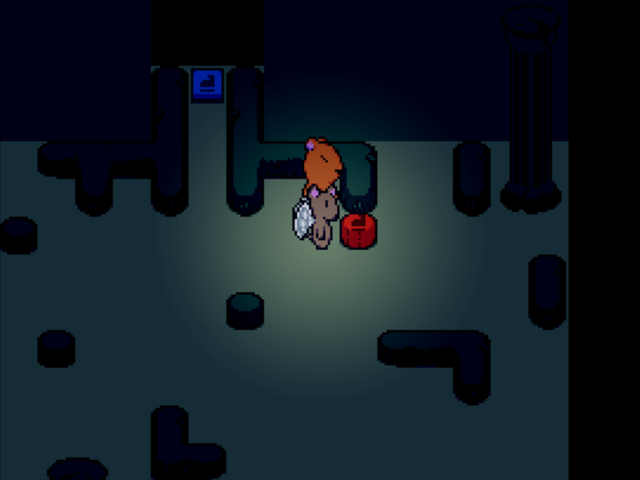 See, here there's a return of a classic minigame of Abdogtion: the "kicking puzzle". But now I'm a master of this kind of games, easy-peasy!


Final Verdict
This game is short but pretty interesting and enjoyable, there are just some minor issues, I'll list here:
- There are couple of typos ("dissapeared"> disappeared, "looks live"> looks like).
- The Enter and Esc keys are disabled and you are forced to use Z to interact and X/Shift to enter/exit the menu (not a problem but an odd choice).
- F12 instead is NOT disabled, so pay attention because pressing it may often mess the game, because it sends you back to the main menu but without removing the menus and diaologues of the previous screen so... avoid doing that, never press F12 and always use the menu to exit the game!

The good? Well I love the graphics, these are totally original and in the same style of Abdogtion, so cute, stylish and well done. The story is also simple and short but well written and interesting considering it's an horror adventure, even if I am not sure if I understood exactly the ending really well (I am undecided between two similar theories, anyway that's maybe the intent of the author, to leave the story open to interpretation).

Close
01/09/2022 12:37 AM
Once again thanks for your review! Took some of the feedback to improve the game. (though the extra inputs should've been available from the start, I just forgot to add them at the last minute)

Also, let me tell you that your reviews are pretty entertaining. Loved the way you drew similarities with my last project to highlight style peculiarities.

author=Ikoru
Once again thanks for your review! Took some of the feedback to improve the game. (though the extra inputs should've been available from the start, I just forgot to add them at the last minute)

Also, let me tell you that your reviews are pretty entertaining. Loved the way you drew similarities with my last project to highlight style peculiarities.

Thanks a lot, I have fun writing these reviews (een if you can probably notice that english... isn't my native language!), but I've even more fun playing these games.
This was good, I liked especially the graphics... and that ending!
Ikoru

author=TheRpgmakerAddict
Thanks a lot, I have fun writing these reviews (een if you can probably notice that english... isn't my native language!), but I've even more fun playing these games.
This was good, I liked especially the graphics... and that ending!

This game was a pretty refreshing experience since it only took me around 3 weeks to complete (unlike Abdogtion, which made me spend around six months of my lifetime to release without even counting the eight patches)

Also, I'm not a native english speaker neither, learnt over time thanks to the time spent on Internet.
Pages: 1