During a dark night,
three thieves enter a castle.
They steal... the SAGE STONE!

Empowered by this,
they then loot a nearby town.
By stealth or by blood?

You can choose your path.
There's plenty of options here.
Just mind your karma!

Join Brahms and his trio of miscreants as they loot places clean, instigate lots of combat, and cause general mischief. Some towns are too poor or heavily guarded to be good targets while others will serve as stepping stones for your grand plot. Plenty of dungeons to dive into or ignore. Menace a rival party of heroes or explore the depth of secrets hiding below and above. Plenty of other games are parodied and nothing is really taken too seriously.

DMCA warning: Samples from Childen of Bodom, Metallica, or Siege of Avalon might get your VOD copyright struck, partially muted, or could add ads.

Flashing lights warning: Sudden flashes can occur and some battle effects are a bit much. Recommended to be played in a decently lit room.

Fullscreen warning: This game launches in fullscreen which has an awful aspect ratio and might cause issues with the midi music. I suggest pressing to toggle to windowed mode then to 2x size it.

Gender equality warning: The entire party is either male or non-binary.

Installer warning: Your antivirus is probably not going to like this ancient installer exe. You can't even paste an install path and have to click through the folder tree.

Intellectual property warning: Characters, music, sprites, tilesets, basically everything under the sun has been lifted from other games.

Inventory sort warning: All items are sorted by item ID. You may have to scroll past unusable items to find other battle items and logical grouping isn't really a thing.

Loud audio warning: The game is loud from frame 1 so be sure to not have your headphones turned to max. Some SFX/BGM is a bit too loud at times.

Midi music warning: Most audio in this relies on your OS's midi sound font. Results may vary. Sometimes the music goes wonky and notes are off key for whatever reason.

Missable content warning: Huge amounts of dialog and several scenes and even party members cannot all be seen on the same run. Even with repeat play-throughs, some content is just too hidden or obscure.

Murder option warning: If you would choose to ransack a zone, you can check/murder/ignore most folk.

Narrative warning: The team is all about the loot and scoot and isn't involved in an overarching epic quest to save the world. Narration and direction are at a minimum.

Nasty bugs warning: The game-breaking bugs I was able to find were squashed but there is an absolute chance of other minor bugs still existing. I may patch out the nastier ones that get reported.

No tutorialization warning: If you do not intuit the rules, you may be slain. NPCs that explain mechanics of the game are hidden in secret pocket dimensions or are already engaged in a combat arena.

Piracy warning: This game was made in Don Miguel's awesome version of RM2K which is probably highly illegal etc. The official steam version has frame-rate issues, so I never switched over.

Pixel gore warning: Some bits are gratuitous; most times there isn't a cadaver and pool but other times there is a battlefield of a dozen of doomed dudes.

Readability warning: I decided to go with transparent text boxes and blue text for item pickups which turned out to be bad for watery/blue zones. There are some other color/contrast issues going on too.

Suspicious balancing warning: Some items, skills, and possibly even characters will not up to be up to par with others. Some encounters will have lopsided rewards or a sudden difficulty spike.

Teen-aged writing warning: Some dialog was rewritten to be less awful but most has gone unchanged over the decades. Everyone is bound to find something offensive.

Typos warning: These were progressively slain but are still numerous.

Wav music warning: Are you ready for a 6MB track? Prepare for extreme compression and the bulk of the overall file-size.

Weird characters warning: Most characters were created from ideas posted to a 20 year old forum thread. These kinds of characters might not fly by today's standards but weren't cut. Watch out for drunks, stoners, Stalin, fin collectors, *ists, racial stereotypes, people that type in all-caps, people that substitute letters with numbers and punctuation, people that are the sprite of one character and the portrait of another, and other such troublemakers.


In memory of a good friend who had helped work on the game 20 years ago...

Weaknesses and resistances of party members

Other characters hidden below:
Show

Close
01/12/2022 02:05 PM
Had a nice time playing this! Really reminds me of old school classics made on the engine too. There's a couple of issues I dealt with that I heard were updated and improved upon since, but overall it's a fun little experience!

Close
01/13/2022 12:07 AM
Thanks for diving in and taking a bite! I kind of felt like I was flying blind with my usual tester gone.
TheRpgmakerAddict


The moon key is just to the right of the entrance of the area beyond all the rubble below the campfire. It's simultaneously the easiest and hardest key to find.
TheRpgmakerAddict

Thanks! My favorite rm2k game was probably Blurred Line, but that's a billion years old.

Funny coincidence, since last week I posted the review of A Blurred Line! (But yeah I played it ages ago of course).

Anyway I reached the freeroaming part. Pretty good, even if some zone are still too hard. I need to level up and get better gear!
Trozz

Close
01/13/2022 11:19 PM
I think the flooded cave just south-west of the hideout is a good place to get started. The difficulty spike issue that comes in at chpt 5 is probably the roughest part of the game as most places you have access to have nasty encounters that bop the party. Good hunting!
fifacv
0 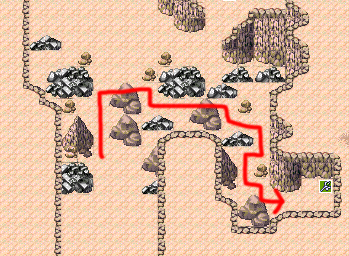 Close
01/14/2022 06:03 PM
I really really like the trailer here.
I've watched it at least 4 times already.
I like how you use Yohta Kitagami's RTP music.
I wish peeps would lean on it more cause there's
some really great stuff in there.
I also like how you used the record scratch XD
It really gets the point across.

Cool stuff here. I love it ♥
Bookmarking this for later.
Trozz

Close
01/15/2022 03:55 AM
Woah, thanks! Hell ya, Kitagami is great. That opening track is perfect for the heroes' theme. Really glad you liked the trailer. The original plan was to have a bunch of text and show off a couple dozen biomes but I think the rush job I did on xmas day turned out alright.
ArmchairNecromancer
0

Show
-When you try to select Mysterymeat1 in the "Select your party" screen, it puts in Auto, seemingly because they both occupy the same slot in your active party list. This happens regardless of whether Auto is in your party.

-When you jump off the waterfall from Sky Island and land in the water below, if you don't move the character at all before he hits the wall the game soft locks. (But f12 will reset the game normally).

-in new game plus, after leaving the unlock skills area for the first time, the game doesn't deliver you back to the proper chapter 1 area. instead it delivers you to some other place, either Venom's room with the summoning circle at the hideout, at the gates to sky island (the room with the summoning circle and the chair), or the throneroom of forum gate castle. When entering the main area of the hideout, it gives you the message that you need to go to Forum Gate to get the Mcguffin, and likewise when entering the exterior area of Forum Gate, it gives you a message of arriving there for the first time. The most significant thing is that you can't pause/bring up the game menu, presumably b/c the part of chapter 1 that allows you menu access never occurs. Other things are also somewhat jumbled, such as two Trozzes appearing at the magic shop.

-I'm not sure if this is a bug or not: but if you have Undead Cheese in your party at the time of the jump to New Game Plus, he becomes the cursor for the new game choice selections (hideout music, etc.) and can walk around the screen. His sprite replaces that of Brahms' and he takes part in the first battle at the intro castle.

All of these occurred with a game that had the dancing mushrooms code but no others activated, if that matters.


If needed, I can provide saves where the errors occur.
Trozz

New content:
Show
- Version number now appears on the title screen
- Added a new deadly fighting duo atop the tower of combats
- Added two more musics to the library of the O.
- "Jack Bufula" can be learned by slaying Jack Frost
- Zamza will give you an entangle scroll before a boss battle (on hard mode he gives you a dilute potion instead)
- Updated F.G. throne room dialog/battle for NG+
- Updated dialog for starting NG++
Bug fixes:
Show
- Jumping from a waterfall with a snorkel no longer permanently paralyzes you
- MM1 can now be added to the party from the hideout
- Guards no longer casually stroll around after V. Castle is attacked
- Entering NG+ now properly resets items, switches, variables, and party members; names are no longer changed; artifacts are retained
- S. Oracle no longer has repeated dialog about missed secrets; he now has different dialog if you are on NG+
Balance changes:
Show
- Scalding Water MP cost increased from 20 to 22
- Freezing Water MP cost increased from 18 to 20
- "Let a ripper go" damage increased from 18 to 20
- Riggy2k3's boon increased from 1235 to 2003
- Easy mode gets combat initiative when revisiting D. Castle
- "Omega" tech MP cost reduced by 25
- Ice Wave (enemy tech) damage increased from 10 to 12
- Escalaus' Attack reduced from 130 to 110
- Demi-Fiend no longer casts debilitate when at critical health
- Demi-Fiend will summon Jack Frost instead of Aquans
- Pixie casts debilitate more often, is now slightly weak to dark, and Defense increased from 80 to 90
- Mothman is now immune to thunder
Trozz

Close
03/23/2022 12:47 AM
In case you wanted to know about who was weak/strong to what, I've got that info finally typed up.
Weaknesses and resistances of party members
Pages: 1