It's all Klaus' fault!

I know, you know, my avatar is Klaus from the Rpgmaker 2003 database, but he is NOT the evil Klaus of the game I'll present today, Klaustastrophe!
This mean sausage named Klaus has kidnapped the princess of Potato kingdom, but Colonel Potato comes to the rescue... will he prevail?

Klaustastrophe is a bizarre game made by Crashykk with RPG Maker MV, and bizarre not for the setting and characters, that are all foods, but because it's a puzzle game with some action segments, and for this reason it requires both strategy and fast reflexes! But luckily things will be introduced gradually.

The game consists of three stages (forest, city and Klaus mansion), each one with its final boss that the heroic Colonel Potato will defeat with the player's help of course! The Colonel is armed with a gun but has limited bullets (except in some instances), while enemies in he beginning are unarmed, from the second stage they will have guns, and in the third stage there will also use kamikaze attacks! 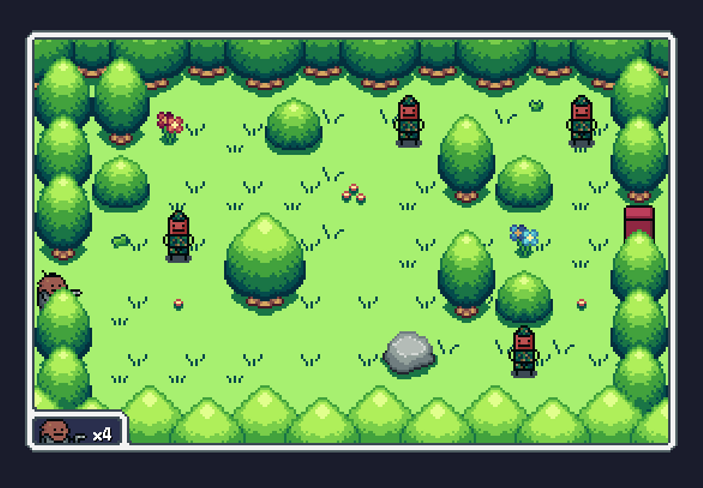 This was the first part that gave me some troubles. Well it helped me master some rules, but I knew nothing about what was going to happen next!

But let's focus on the beginning: enemies normally (at least in the beginning, from third level things will be different) act immediately after Colonel Potato shoots or moves of a tile, so take this in mind before acting because he's one against many. Also shooters shoots whenever he shoots (sounds almost like a riddle, but that's what really happens) so be ready to dodge their bullets (unfortunately other enemies shield you from their projectiles but aren't harmed by them). In every case stand next to an enemy and you are dead. No lives, no life bar, you have to restart the level.

Then there are the duels with the bosses, that may attack alone but possess the ability to withstand several bullets. And the second boss was especially unfair (took me more tries to defeat him than the final boss!) since he doesn't follow the rules of the others, since he moves and shoots in real time. To tell the truth also some of the enemies met in the following stage will also act aggressively in real time, but at least they just take one bullet to be dispatched. And they also do not shoot. Luckily defeating a bosses means earning a password that can be used to start the game from the next stage, so no possibility to save but that's ok even if this means that if you do not defeat a boss next time you will have to restart the stage from the beginning.

And the game is all here, kill 'em all and proceed, anyway its cute graphics and catchy music (that becomes far more dramatic during the boss encounters) are really peculiar and original. It's a short game but there are three different enemy types, three bosses and three potato characters including the protagonist, all cute and . Maps are functional and colorful and complete with many (useless but nice) details.
Very good! Now, let's go to the final part... 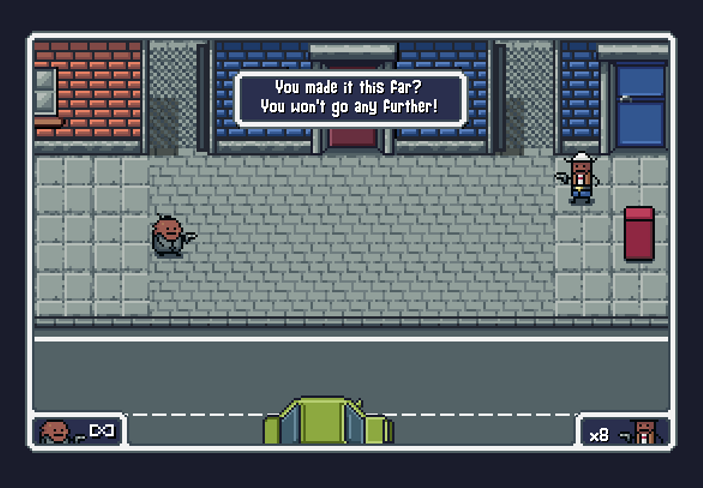 Boss fight! Don't let you be impressed by the infinite bullets, this is one of the toughest encounters if not the hardest!

Final Verdict
Klaustastrophe is a cute and enjoyable game, pretty short but fun! It's a puzzle and especially in the beginning the player has to learn the system and avoid to be locked into a die-or-die situation (for example when there is a single tile between the Colonel and the unarmed enemy and he is NOT facing this opponent! You cannot survive in that case, and also if you have less bullets than the remaining hostiles, of course). I admit I liked more the puzzle sequences of the first and second stages, the third is a bit frenetic (also some levels of the third stage must be completed in a row otherwise you have to restart from the first of them, not from the one in which you died!), and the bossfights... well these are fine, except for the second that requires incredible reflexes and a bit of luck, more than the last encounter.

A nice puzzle/action game and after finishing it and watching the ending I ask... what will happen next?