The Secret of Varonis

An upcoming Gameboy-style RPG! The Secret of Varonis features old-school combat mechanics and visuals faithful to the gaming heyday of 1989. If you're nostalgic for retro games, or just looking for a good, challenging RPG, this game is probably a good fit.

The city of Varonis once housed a wondrous portal. Wisemen and scientists emerged, bearing new technology and powerful artifacts. But when dangerous monsters also spilled out, the portal was sealed and the city abandoned. Jonas and Janine, two warrior twins, set out to discover what has become of the secret city, but when they fail to return, it is up to four village youths (and their trusty robot) to rescue them... and uncover the truth behind the gate of Varonis.

Check out our homepage/devlog too!

definitely not a SaGa fangame

Hi, this is programmer psy_wombats here, although I'm wearing the designer hat to write a bit about the monster race design. Playable monsters have always been a SaGa series staple, and as we're drawing, uh, a lot of inspiration from SaGa, of course one of our races is also the friendly loveable Monster.

The core idea of the monster race is that they are shapeshifting versions of the generic enemy monsters found in random encounters. Enemy monster drop meat, which can be consumed by party member monsters to trigger a transformation. The earliest incarnation of this system (used in our predecessor game Masters of the Demon World) was heavily modeled on SaGa1's transformation system, where a combination of the eater's tier and the race/subrace of both monsters determined which monster form you actually transformed into. It required a PhD to understand. Like, really, here's a snippet of what our design docs looked like:

We compensated a bit by actually telling the player beforehand what monster they'd transform into, which is a huge quality-of-life improvement in itself, but for the average player, all the transformation tables amount to random transformations and random power gains, which make monsters very inconsistent. 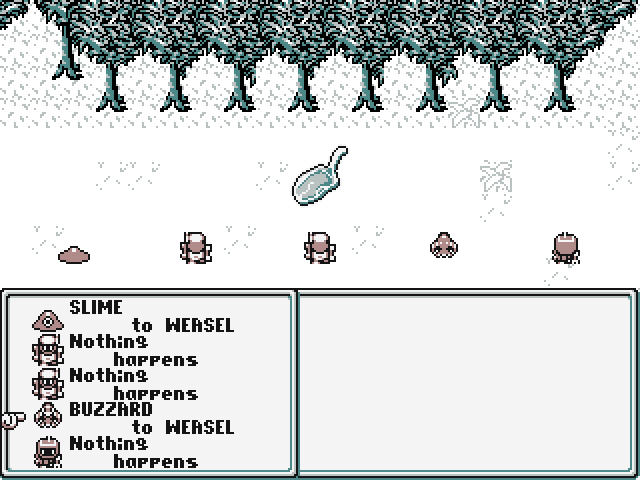 Our second attempt at a monster transformation system had two goals, then: give monsters more predictable power increases, and make the system understandable to normal players. The most straightforward way to do this was to ditch the transformation table -- from now on, if you ate a monster, you became that monster. But of course, having a friendly monster the same levels as the random encounters isn't great, so we introduced a level-up rule. An example of how this worked: if you had a GOBLIN monster and there was an ONI available at one tier higher, a goblin eating goblin meat would instead level up and become an ogre, stronger than the random enemies in that world. However, this also felt random in that for the average players, there was no way to know what monster forms were available in the next tier, so there became these sort of "magic combinations" where GOBLIN + GOBLIN = ONI, but SKELETON + SKELETON just became SKELETON again. So we were back to square one as far as "predictable increases" went.

In this second iteration, we also added meat shops. Meat shops sold meat just like you'd find after random encounters (although at significant markup). This was an attempt to give players a consistent way to imrpove their monster if they were unlucky with meat drops, and it also gave all-monster gimmick parties something to do with their cash. It definitely felt like a win. 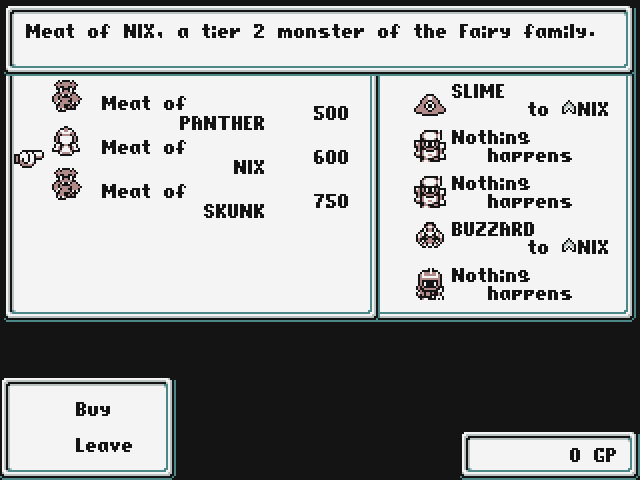 For the final iteration, we decided to change the way monsters increased in power. "Eat SKELETON to become SKELETON" definitely seemed like a good step, but we wanted power increases to also meet a few other goals: they should ideally 1) encourage experimentation and eating lots of meat, 2) occur predictably, and 3) still have a "jackpot" feel where players could eat boss meat or something and get a shiny powerhouse monster every once in a while.

We ended up with a "form library" solution. Now, every monster keeps track of its known forms. When a monster eats meat that would transform it into an already-known form, it instead mutates into an unknown form, with a chance of higher-level forms also occurring. SKELETON + GOBLIN results in GOBLIN, unless you've already been a GOBLIN before, in which case you'll probably mutate to a BUZZARD or ROACH or similar tier 1 monster, but sometimes you could also end up with a tier 2 ONI or ELEPHANT. And if a monster learns all the forms of a tier, that level-up mutation is guaranteed.

This way, there are two approaches to monsters: chance into a rare powerful form, or experiment with lots of different forms to consistently access higher tiers. We also added the option to transform into any previously known form via a special SPICED MEAT item, which means that players don't have to worry about losing their favorite forms if they want to return to experimentation. The transformation menu looks something like this: 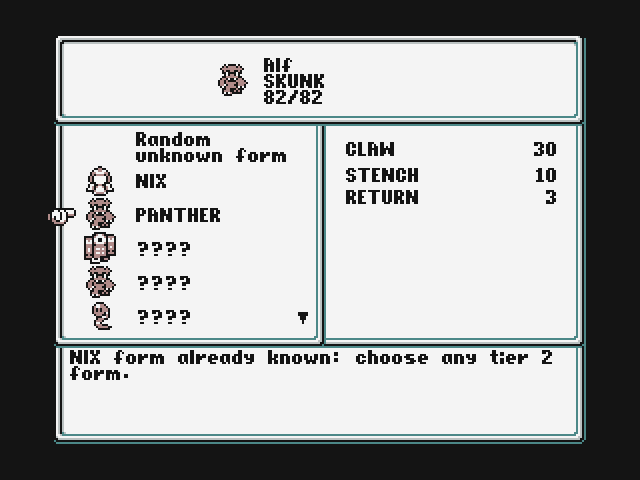 After a lot of playtesting, monsters definitely feel fun to use and they're in a good spot. While they might not always be the strongest members of the party, they're adaptable, low-cost, and they have access to some abilities that other races simply can't use or won't find until later in the game (such as teleportation, ability use restoration, enemy scanning, or even healing and basic magic at the very start of the game). So don't be afraid to take a monster or two along with you!
Combat!