A Peek Behind the Curtains

I'm not always great at promoting and building hype for stuff I'm working on, and seeing as Izrand Allure is still in the early stages, it's hard for me to decide what is and isn't worth a blog update. If things go as planned, I'll have some big announcements soon, but for now, I figured I'd show some day to day progress and things that are being worked one :D

First off, we've got fresh new character designs courtesy of MakioKuta! Meet Caspian and Miray, a villain duo that will be harassing the heroes at several points over the adventure! 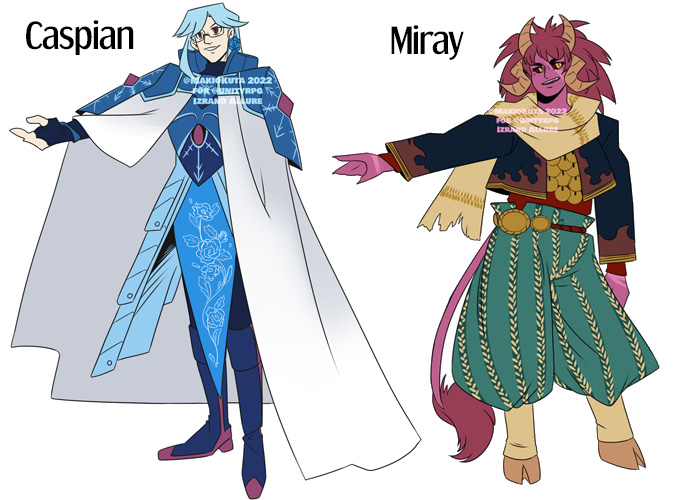 Big thanks to Maki, it's always fun working with her on these character designs, and she never disappoints with the results :DDD

Getting animations to work how I want has been a bit of a learning experience with MZ, but I've gotten the hang of the basics and can pretty much do what I want with Effekseer, tho I'm not great at some of the fancier stuff. That doesn't really hold me back any, and I've got a lot of animations done for the game! They take a little bit to draw pixel by pixel, but I really enjoy what I'm able to do! I'll put just a small sample here :3

Also been doing a lot of enemy work! You'll be pleased to know there's a large variety of enemies that'll be just itching for a fight with our heroes! Like Luxaren Allure, enemies appear static on the screen but will jump to life when attacking, casting spells, or taking damage! The preview gifs for them turned out a little wonky, but it gives you an idea of how they'll look in-game!

And let's show off random monsters moving around just for giggles!

Okay, that's enough of a peek behind the curtains! There's more to show like tilesets and eventually character assets as well, but I'll leave that for another day! :DDD As always, thanks for checking in with us, and I hope you have an awesome day! ^_^

author=MakioKuta
I drag myself from the shadows to say I would smooch all of these monsters.

That's how I know I'm doing good, if I can pass the Maki Would Smooch test XDXD :DDDD Thanks!
Dyhalto

Close
06/29/2022 03:41 PM
I love how excited they all are. They just want to play. Especially the razor turtle, all jumpy and wagging his tail :D
DungeonDevDude

author=unity
That's how I know I'm doing good, if I can pass the Maki Would Smooch test XDXD :DDDD Thanks!

The ultimate praise is if I "want to ride one to the grocery store" and I must say that the big skeleton fish passes that bar.
Marrend

Close
06/30/2022 10:41 PM
Makio's designs look really good as always! Your monster design is really impressive too, Unity! I feel like it takes me a long time to think of enemies that I want in my game. I think I like the squid the most, but the 3-headed turtle is a close second. Pokemon: Izrand Allure when?
Jaiden