0 reviews
Before Crisis: Cissnei -Final Mix- is a fan-remake of the Square Enix game Before Crisis, which was a canonical part of the Final Fantasy 7's universe storyline that was released for cell phones back in 2004.

The game was originally created by Obesebear, an admin on the popular Final Fantasy modding site Qhimm. The Final Mix version is managed and produced by Devina, another Qhimm member who helped get the project going by doing things like making sprites, the battle system, art assets and programming. The game was originally posted to Qhimm in November 2021, and now has an entry here on RMN for the exposure bucks! 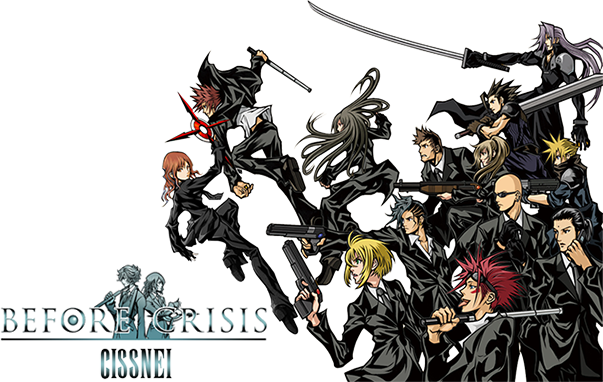 
This remake is set seven years before FF7 begins, although by the time our game starts, Crisis Core has already been going for a few months. The game is a "prequel" of sorts set several years before FF7, before Cloud ever fought with the Buster Sword. It is intended to be played before starting Crisis Core. It features some artistic liberties compared to the original Before Crisis, although the general beats of the plot are relatively faithful to the original;

Players play as a young woman Cissnei, a "Turk" who reappeared in Crisis Core. The Turks are a group of skilled agents working for the Shinra Electric Power Company both in and outside the city of Midgar. Cissnei is loyal to the power company, although events involving a mysterious group called "AVALANCHE" pressures her to question her long-held beliefs as she learns more about Shinra's involvement across their planet. Cissnei embarks on a powerful coming-of-age journey while performing her assigned duties, discovering both the fulfillment and the consequences of her actions.

The full game will include at least two major Turk missions, operated by Mr. Tseng and Turk leader Veld.


• No installation needed. The entire game is self-contained in a directory.

• A dark and mature storyline fitting to the universe of FF7, albeit with some light-hearted humor here and there, just like the original FF7.

• Systems such as the Limit Break and Materia system, as well as a phone that can receive messages.

• Connections to FF7 and its Compilation. You will encounter familiar faces, as well as references to them. And yes, you may even see a chocobo here and there.

• A cool remix of Before Crisis' battle theme made by another generous fan to our project.

The game is similar to both the original Before Crisis, as well as the "Before Crisis Remake" also hosted by another developer on RMN, but players will notice many things exclusive to our version. We respect their work and wanted to see what another remake could look like in a newer RPG Maker engine with higher graphical fidelity.


Version 0.1a is the first build of the game and is the one hosted here. It's not perfect but very much playable. I just start learning RPG Maker in 2021 so programming has been a lot to take in.

An update to refine the first chapter and expand content beyond are to come, with chapters two and three to come with a release date aimed sometime around Winter 2022, likely not too long after the Crisis Core remake comes out.


- F4 is fullscreen, F5 is force reload to title screen
- Shift (to run), Z (confirm)/X (cancel/menu) are used if you are playing on keyboard.
- This demo is controller compatible, but you may need to press cancel or some other button in order to "activate" your controller first. Try spamming all buttons on your controller to get it active. It's a weird RPG Maker thing.
- Be sure to extract the "www" folder inside the .rar as well or saving won't work.
- You need to examine the first save point in order to use it, walking over it won't work. Please test to see if the first save points works. It's not a super long demo anyway and you can retry battles if you die.
- The "ALL" Materia does not work exactly like FF7 automatically. You need to press a button (such as Shift on PC) while targeting enemies. As in FF7, the All Materia needs to be in a paired slot.
- If you hold Z during cutscenes, it will fast-forward them.
- Please read the instructions and tutorials very carefully as you play. If you skim, you'll probably end up confused somewhere.
- You can get through the combat more easily if you notice general patterns to the enemies and strategize. My advice is to be conservative with healing items, and focus on defeating one enemy at a time because flip-flopping will give them more turns.

Close
02/21/2022 02:38 PM
Gave this a try. While the Shears fight was giving me some problems (even if I ignore 2x Cut, Bio, and Silence, having him cast Full Cure three times, and then mocking the player for not being able to survive without Materia and/or items seems more than a little hypocritical), and I cannot hit the limit break's center zone for the life of me, what I did play of this demo was pretty fun/engaging.

If I would make one suggestion, it would be to slow down the limit break cursor a tad, or to maybe make the center zone bigger? I dunno. I'm mostly thinking about Legend of Dragoon, and that I use save-states in achieving a 4-hit combo with a Dragoon attack, much less trying to achieve a 5-hit combo (I generally don't try to do this). To say nothing about my time in Shadow Hearts - From the New World, and it's Judgement Ring mechanic, which I've briefly posted about.

*Edit: Also-also, welcome to RMN! Share your creativity with us! XD
Pages: 1