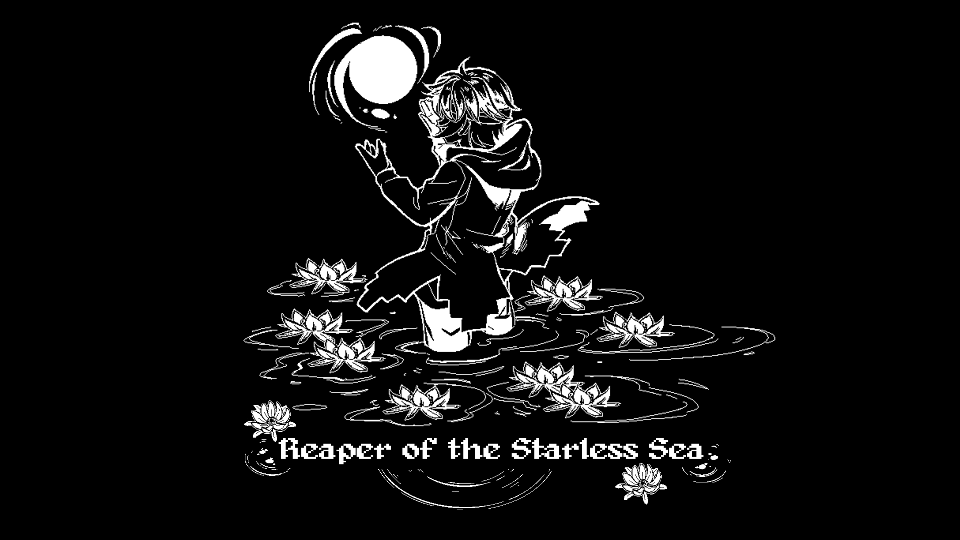 0 reviews
​​
​
A forgotten memory lost within the tides of time.
Bonds forged. A promise made.

Aimlessly they wander through the starless sea.
With the pale moon's guidance, they walk towards their fate.


✦ Content Warning
Show
This game contains depictions of beauty of death, murder, implied sexual assault, depression, anxiety, and suicide, and may not be suitable for all audiences. It also contains bright flashing imagery that may cause discomfort and/or seizures for those with photosensitive epilepsy. Viewer discretion is advised.

I updated the game page with a primer trailer and a new cover art.

Close
04/20/2022 10:16 PM
visuals are interesting, all black and white. Are you going to use live2d animations on rpgmaker?
dethmetal

author=InfectionFiles
Great art, but it's one of those things where it's hard to look at.

Art doesn't have to be easy to look at. They're going for a specific style, which they have achieved. This is such a back handed way to post a comment on a project, especially when there's nothing technically wrong with the work, you just think its hard to digest and decided everyone else needed to know.

I'd take art that's ""hard to look at"" (it's not) over the homogenous consumer-diluted crap we get from triple A titles 95% of the time.
goji

author=Puddor
I'd take art that's ""hard to look at"" (it's not) over the homogenous consumer-diluted crap we get from triple A titles 95% of the time.

The game has a unique style to grasp - it's monochromatic and very detailed. A screenshot like this is overwhelming at first glance. Their short comment about it looking good but being overwhelming is concise, innocent feedback. Seems like you're taking pot shots at this comment for not sharing your opinion.
dethmetal

Close
06/22/2022 07:19 PM
I thought their comment was valid. I think the game looks very cool, and I personally won't have an issue playing it, but I do think some players might benefit from a "low-contrast" mode where the black is made to be a very dark grey. However, that of course is up to the devs to decide if it's worth doing, or if it conflicts with their artistic vision.
Puddor

author=Puddor
I'd take art that's ""hard to look at"" (it's not) over the homogenous consumer-diluted crap we get from triple A titles 95% of the time.

The game has a unique style to grasp - it's monochromatic and very detailed. A screenshot like this is overwhelming at first glance. Their short comment about it looking good but being overwhelming is concise, innocent feedback. Seems like you're taking pot shots at this comment for not sharing your opinion.

Backhanded comments aren't constructive or innocent. "Great art except its hard to look at" doesn't tell anyone anything and leaves nothing actionable.

I'm taking pot shots for the comment being worthless, actually! Last I checked 'hard to look at' tells everyone a whole lot of nothing at all. Which screen? Why? The pixels? The contrast? The linework? The content? Black and white pixel art is a specific style used by multiple artists, so its worthless without being a specific direction.

Dethmetal in fact has followed up with a comment that does have actual constructive methods suggested instead of being inane.

Infection has 4600 makerscore, I'm sure he can muster something more than hard to look at.
InfectionFiles

Close
06/22/2022 08:08 PM
Yikes, didn't intend to start something and I should have been more detailed. My apologies, I left a short comment after viewing the screenshots without thinking about how it would be taken.

The art is very precise and obviously very well done. My problem with it that for me personally, it's almost blinding where I can't literally look at it for too long because it blurs and physically hurts my eyes. That's on me. I just had this come up with another game actually. But I know I'm not the only one. It's a very contrasting palette of black and white that is incredibly sharp and well defined. Again, it's amazing artwork, no question about that. It's the brightness that jumps out and makes it hard to focus. And this is just me looking at screenshots and not playing the game.

You're justifiable in defending it and I wish I had elaborated more. You and Arch are great artists and respectable as well as those that came to defend me and I appreciate that as well.

edit: Good example is the screenshot of character cards, where those unhighlighted make a good contrast for the bright white highlight card. That doesn't bother me in the slightest looking at it because it's not just two stark colors.
Faye

Amazing work. Love the art. It can indeed be overwhelming for some people. Not your usual anime eye candy. The gameplay sounds interesting, too. This game is on my "wishlist".
Darken

As someone who makes lofi color games I get comments like that all the time that read more to me as simply a eye/preference/readability issue hence "great art but difficulty looking at." Personally I have keratoconus and things like straight up thin white over pure black tend to be super blurry to me with a ghosting effect. It's an extremely common problem especially with website colors such as this CSS page. I can kinda deal with it but making a bold art choice like this is very clearly going to be not everyones thing especially for usability.
Puddor

edit: to make this post more useful, I think accessibility should absolutely be considered, if the intention is unable to be construed as a result of the high contrast. However, just based on what I know and the information provided here, it seems to me that any indistinguishable details caused by the absence of colour are very much intentional. It causes a sense of unease, in the same way indistinct shapes in the dark generate disquiet. Ideally, a medium between this sensation and accessibility should be reached, but I really would prefer Nessiah to avoid muddying her intention as much as possible.
Pages: 1