The secrets of an ancient civilization have long eluded the Astra Hunters: a guild of explorers-for-hire tasked with uncovering the world's greatest mysteries. And Zosma is the greatest Astra Hunter of them all! Or at least he wishes, were he not ranked dead last as always.

What seems like a routine attempt to uncover more about Zosma's favorite adventuring ground becomes the beginning of a grand adventure as he plummets for miles to what should have been certain death! With no way up back to the surface except through the daunting Crescent Moon Tower, Zosma may just find his greatest discoveries ever... and get some help from a mysterious animal companion along the way!

Astra Hunter Zosma aims to be a short (I really mean it this time) treasure-hunting RPG with a focus on combat, exploration, and a blossoming friendship between a buddy duo! Search for and collect treasure as you climb the Crescent Moon Tower and increase your Astra Hunter Rank for great rewards!

Astra Hunter Zosma began development in early 2022. Development is still fairly early on, so please look forward to more updates as they become available! The game will be completed sometime before the sun explodes.

With Plugins by: Coelacanth and VisuStella.
(Subject to change)

Hello! And welcome to the first devlog for Astra Hunter Zosma.

I'm really excited to finally reveal this game, which has been in development for a few months now. I appreciate all of the warm reception that the reveal has gotten so far, which is quite a relief as it's already shaping up to be quite a different experience than my past projects.

So let's just dive in and talk about how Astra Hunter Zosma came to be, what it's about, and where we are in development.

Inspirations and A Different Approach

Up until now, I've been primarily working on larger-scale RPGs with a primary focus on being big adventures that take place across entire worlds: Brave Hero Yuusha, Soma Spirits, and especially Soma Union all told very big stories in world-spanning journeys. I think these stories worked well for those respective games. But after doing three of those, it felt like it was time to do something a little smaller.

The titular Zosma is a "great" adventurer who falls many miles below the surface during a routine adventure, and his only means of returning back to the surface is through a treasure-filled tower that leads to his world above the depths. And along the way, he'll meet an animal companion and collect all the treasure that he ever dreamed of.

As such, the story is a little more self-contained than Brave Hero Yuusha or the two Soma games: pretty much all of the game takes place within this single and continuous dungeon, and while there is an over-arching plot, much of the story will focus on the blossoming friendship between Zosma and his animal companion. The game takes a considerable amount of inspiration from the PlayStation RPG Guardian's Crusade, which also explored the bond between a player character and a monster buddy. And the gameplay aspect of it, while still at its core a JRPG, also takes cues from the underground treasure-hunting aspect of The Great Cave Offensive from Kirby Superstar. It's quite a strange combination of inspirations! So I hope they mesh well together.

The bond between a player character and an animal is something that I had started exploring in my past project Crescent Prism. Sadly, Crescent Prism was never seen through to completion, but I'm hoping that the spirit of the game will live on in Zosma in many ways.

How is Development Going?

Development so far is going quite well! Which is pretty good, considering that I've been doing a lot of things differently than previous projects. For one, Astra Hunter Zosma is being developed in RPG Maker MZ, which has been both a refreshing change and a bold new challenge after 9 years of making games in VX Ace. Additionally, the game is using a more complex battle system with sideview battlers; I'll forever defend frontview and I'll love it forever, but this has been exciting new territory for me that will also help prevent feeling like I'm just making the same game again. Getting out of my comfort zone in a lot of ways has been invigorating.

The game is much farther along than when I had revealed Soma Union (which was little more than a few debug rooms by the time I had announced it). Most of the gameplay systems, custom menus, battle mechanics, and overall groundwork for the game are completed. The entire first chapter of the game is also finished; there is perhaps enough content for a demo sometime soon! But no promises about a demo until I know for sure.

And a progress chart you shall have! 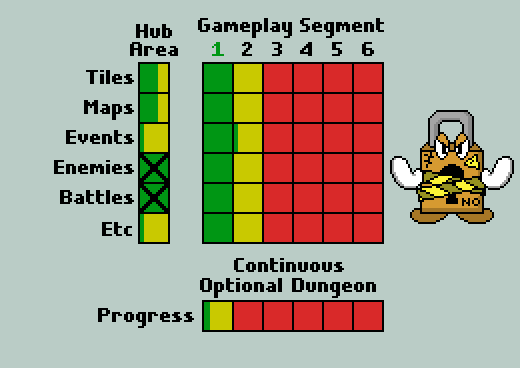 So this is roughly where things stand! After Soma Union spiraled a bit out of control and became three times longer than I initially planned, I decided to put a hard limit on how long Zosma will be. This game will consist of six areas, and a seventh optional area that continuously expands as the story progresses. The first is pretty much done!

Oh, and the lock fellow you see on the chart is the Progress Chart Lock. As long as he exists on the chart, it cannot grow any larger even if I want it to. Them's the breaks!

I haven't been shy in admitting that I don't have as much time for game development as I used to, but I'm also glad I can work on a smaller project like this one and keep the spark going. Soma Union was definitely my "big one"; I don't think I'll be able to make a 20 hour RPG like that again lol. But I'm hoping I have at least one or two games left in me. And Zosma will have just as much love put into it as anything else I've done.

It's been an exciting new project to work in and delves into a different territory. I hope you'll look forward to seeing more of the game down the road!