Rena Lovette, the boy Magical Girl, is tasked with finding an elusive witch after his failure six months prior, during the catastrophe at Bwgmville. Being less competent in the thinking department, he turns to none other than his friends for assistance: Darwin ‘the Wizard’—other occupation, Rena's roommate—and best-friend-from-high-school Tammy. Given only ten days to finish this mission, Rena must explore his hometown of Big City to save himself from being on the receiving end of the Magia Triumvirate’s punitive (metaphorical) stick of justice.

Burn Money Get Witches, Sidestory Ed. is a spinoff to our previous mystery-comedy game, Burn Witches Get Money. Taking place in the same universe, this time players jump into the perspective of Rena Lovette and Darwin in solving the mystery of the Big City Witch, in a trail of investigations not unlike John Bick and Bob had done. The game includes features new and old:

- Make use of Front and Back positions, use status effects to your best ability and become stronger with equipment from Charlotte’s Camp as you fight witchfiends and other witch-y entities.

- Time is even more essential, as players are now limited to three actions per day, with a final deadline at Day 10.

A Magical Girl’s work is never done—especially for one that’s as broke and overworked as Rena Lovette.


This game is made for A Rainbow of PosiTWOvity event.

Me and CrazyBabi did some more playtesting and found some issues with the previous version (v1.3).
The current downloadable is the latest version (v1.5.1). Nothing major is changed, we just mostly made the game smoother/fixed hard-to-notice bugs.

Update notes for the newest version:

- Fixed images displaying incorrectly in bad endings.
- Fixed typos and mistakes in item/skill descriptions and dialog.
- Fixed visual bugs when transitioning between days/during battle.
- Fixed forced save before final boss fight that causes potential soft-lock.
- Fixed instances where players automatically leave Charlotte's Camp due to special cutscenes.
- Fixed instances where the pause menu cannot be opened in PPP.
- The pause menu can no longer be opened while in the overworld/City Map.
- Improved prices for healing items. Medkit, Stimpack and eating at PPP are now cheaper.
- Reduced damage-per-turn of Freezing and Burning status effect.
- Increased damage of attacks for the Mourning Viper.
- Soulburn now correctly damages Rena instead of healing per turn.
- Added some new sprites + other minor artistic improvement.
Map of Banana Bridge

Dialog and map of PPP 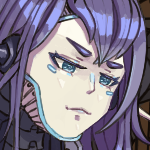