My wish came true after fighting in another world dungeon

The game comes with a relationship function! Unlock a little extra dialogue or more quests. The 5-star system levels a bit slowly for my taste, although it's not as painful if you keep the same group for a playthrough. Max it out for an additional cutscene at the end (not mandatory). 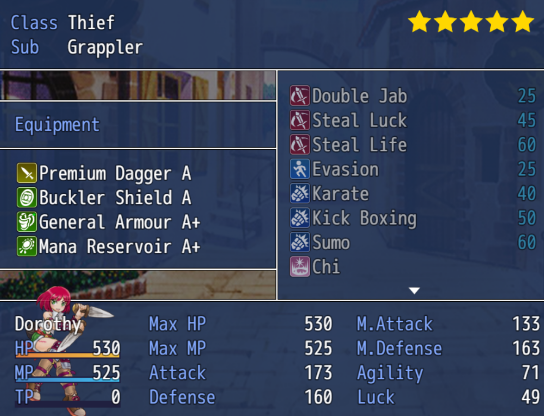 
NPCs may offer useful advice and functions, even if they aren’t particularly exciting. The game could’ve benefited from an editor for spellcheck and grammar. And maybe some original naming. 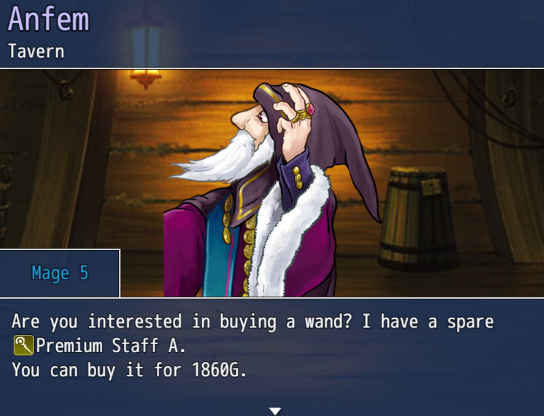 Pictured: Mage 5 getting straight to the point.

Dungeon music is peaceful, and we get a variety. Unfortunately, all battles have the same theme (Battle1), no exceptions, not even the final boss.

Gameplay loop is: Town > Dungeon. This game is great when you can only play a 15-minute session because it’s easy to visualize the chunk of game you have time to play.

In the town Anfem, you can heal, restock, save, swap party, and pick the quests that you’ll need to rank up your guild and progress the game. There is also an upgrade mechanic and being able to carry out upgrades even on stuff already equipped is appreciated. Equipment matters in this game because level-ups do not exist for the characters.

Once you have everything you need from Anfem, it’s time to select your dungeon. I do appreciate the menu-based navigation here and the notice that tells me where I selected my quests. Ever played NetHack? 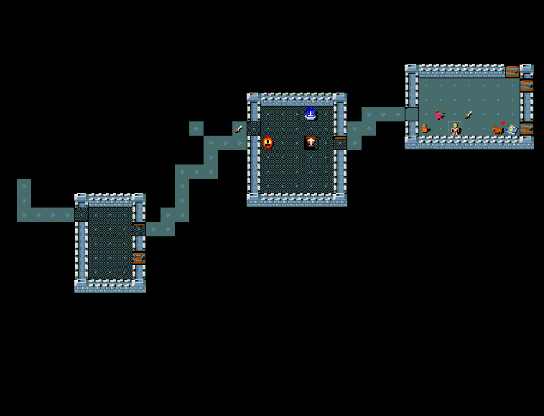 Pictured: I Traveled into the Dungeons of Doom for the Amulet of Yendor with My Trusty Dog


Both that game and this game involves navigating a randomly generated dungeon with monsters, treasures, and hidden traps. Enemies move on the map at the same time as you. The difference in this game is that combat takes you to the classic RPG combat screen, and you’ll carry out your quest and side-quests that you selected. There are dungeons set in different locations, but they do not have any special characteristics to differentiate themselves except for scenery, music, and monsters (so nothing like water traps for the wetland). Also, since not all monsters give a reward and waste your HP and MP, maneuvering around monsters and skipping battles becomes important to save resources and time. 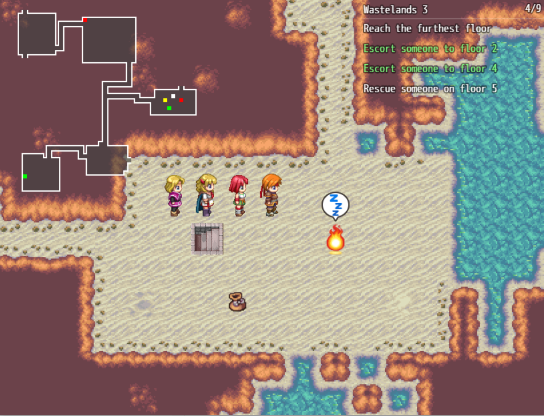 
Once you clear the dungeon, you may get a cutscene based on the quest you took. There is also the chance to interact with your party and strengthen your bonds with them through support conversations. Unfortunately, I don’t know which quests require which party member or if it even focuses on a party member (except for obvious quests like bringing the thief for the thief quest), and I would’ve loved some sort of indicator to eliminate guesswork. 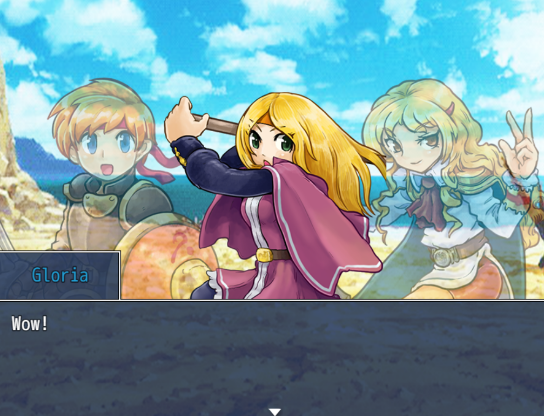 
Game isn’t difficult and combat isn’t tricky (I spam AoE multi-attack skills and regular attacks). I also appreciated the auto-mapper while looking for the next dungeon floor.

Note for dev: I ended up playing the first 10-15min twice since I had to leave my computer during my tour of Anfelm after getting out of the starter dungeon and didn’t make it to a save button and didn’t know how much longer until I could save. It’s not a big issue, and I understand that the roguelike nature discourages saving in mid-dungeon. I’m just mentioning this since it’s possible that others were discouraged by the lack of an easy initial save button, and the first several minutes of the game are crucial for retention of the player.

The main reason I took a look at the game was for the RTP style (in XP!). I personally enjoy games where the dev takes the basic assets and transforms them into their own vision. Plenty of room for improvement, but I’m satisfied with what the dev accomplished.