I know, I know...
this little game was made just to test the possibilities of the Maniacs patch with rpgmaker 2003, anyway this game by MackValentine is still a playable and enjoyable adventure. The plot is very simple: we're in the world of Sihara, your typical fantasy land, and Edwin and Ellana are two adventurers that will have to explore a dungeon, all this is told in the cutscene in the beginning that's also followed by a simple but pretty nice tutorial.

The game is very reminiscent of Final Fantasy, both for graphics and gameplay: for example the merchant you'll meet in the adventure is practically a Red Mage, while the protagonists are simple but nice edits of some of the characters from the popular fantasy jrpg. But unsurprisingly also the gameplay is similar. We explore a dungeon facing enemies in random encounters, we level up, spend our money to upgrade gear, buy consumables and rest. And repeat, exploring further corners of the underground dungeon that is divided into two zones, one natural cave with tunnels and a dark abandoned temple with brick walls. 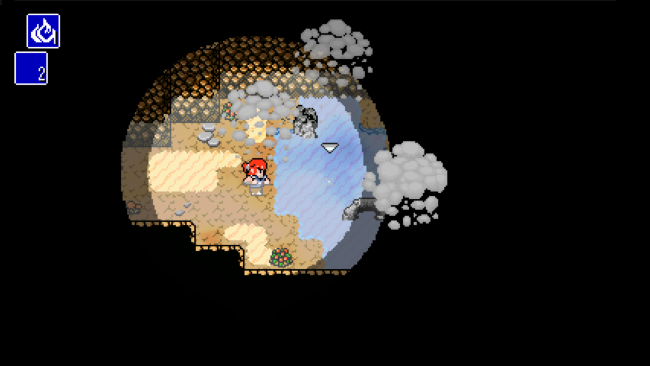 Water pools aren't a problem if we can evaporate them!

BUT that's not all! Ok, if it was like this, I'd have given a lower rating. The game in fact has some surprises for you. First, it's not mandatory to explore every room or single corner of the dungeon to find the boss (that I admit was easier than I expected since a trio of spectres were able to defeat my party in two turns, unlike the boss that I destroyed on my first try!), win and complete the story, second you can do that because it's fun! And it's fun because not only there are simple puzzles that involve moving crates and pressing buttons, but also because you've to use the character's skills!
But let's talk about our heroes.

While there is almost no story and dialogues (aside from the intro cutscene), I can tell you that Edwin is a fighter that can use the power of fire and earth, while Ellana is a mage with the powers of wind and water. But these powers not only can be used to attack enemies in combat with variable damage (hint: flying enemies are weak to wind attacks and strong against earth attacks!), but they can also unlock new paths: burn spiderwebs with a fireball, move items from distance, evaporate water or even use the power of wind to float over obstacles! Yes, that's cool and adds something new to the usual exploration of dungeons. Oh and you can set two powers as preferred, so you can use them without needing to open the menu! 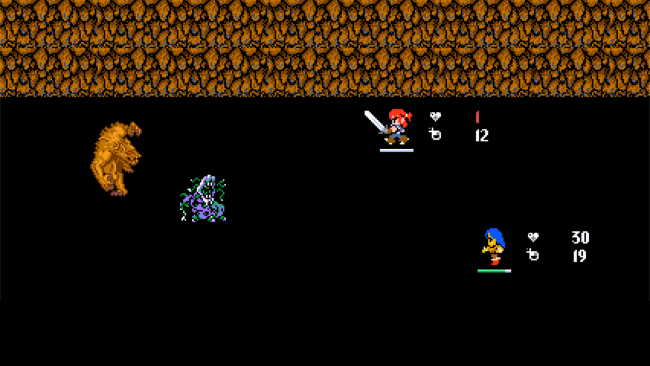 Oh no! Edwin is nearly dead!

Menu? Menus! The game use custom made menus, has three slots for saving your game (whenever you want) and includes three slot plus the autosave! Nice, what else? Well the game is classic, random encounters but you can flee, four/five enemy types, some of those can use elemental attacks or even poison yout party members, all classic. Visually the game is very reminiscent of the old jrpgs, anyway mapping is good, the places and rooms are of the right size, they're detailed and competently made. I also liked how all is shrouded in darkness but our heroes have a torch to illuminate the area around them. Sprites are colorful and well made and also the music isn't bad at all, on the contrary there is enough variation to avoid the feeling of repetition.

Anything bad? Well, I just spoke about music... unfortunatey there is an overlapping of the dungeon theme and the resting theme when you pay the merchant to rest, creating an annoying cacophony! Also I did not understand why Edwin can use First Aid in combat to automatically heal himself BUT he can use it outside of combat to heal Ellena too. Uhm maybe because in combat he has just the time to heal himself? Well still odd choice, anyway nothing bad at all. On the contrary, it's a game with many details and interesting bits. 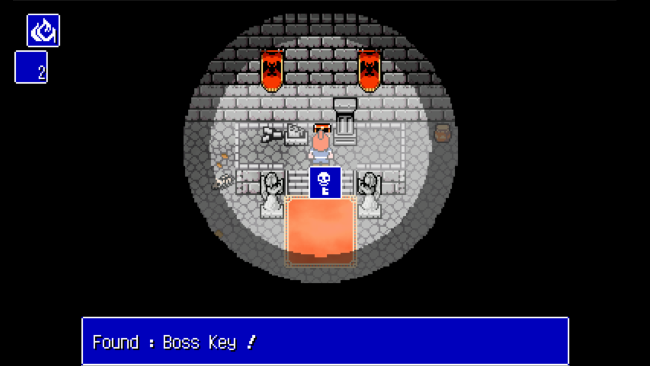 We got the final key! Onwards to face the final boss!

Final Verdict
Siam is a classic short dungeon delving adventure, ok it's ture that half of the content (or maybe more) is totally optional (you can "waste" time to collect every treasure and visit every single room if you really want), anyway despite not being a real complete game (just because it's a bit bare bones in some aspects, for example the abrupt ending!), it's still a pretty good adventure, I found a balanced difficulty and some pretty simple but nice puzzles, and some of these requires the use of the characters' powers, an interesting gimmick.
In the end this little adventure was not bad at all, really!