Hello and have a nice weekend!
Today I played a game from CashmereCat and hotgamerdad made for the riggy2k3's Copyright Infringement Jam conducted in May 2022. This game, called "Benny + hotgamerdad and the Bajillion DVDs", features none other than Benny and hotgamerdad as protagonists and permanent party members (well, their names are in the title!) plus Riggy and other characters you may or may not know, since this is a community game (about Riggy's discord community of course, where that jam originated).

But let's start from the plot: due to a terrible incident that involves the Dvd of a terrible movie called Pixels (that I hope you never watched... uhmm!) and a terrible evil being, Cash and hotgamerdad have to recover a series of movies they lost in the multiverse. 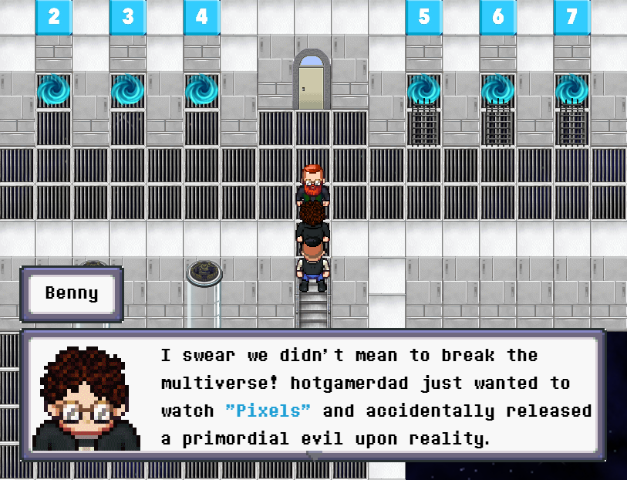 Ewww, the desire to watch Pixels is a sin! Ok, this is the plot. Now, time to go on an adventure!

This means visiting various popular worlds like the world of Lisa the Painful and the world of Pokémon, they fight Mario and Snorlax and get some allies while finding the various dvds and completing some little quests in the meantime. This game features a central hub (Riggy's room) where the party members will rest, and that is just outside the hall where you can take the teleports for the various world... and the stairs to the final level and ultimate battle!

Benny + hotgamerdad and the Bajillion DVDs is a classic party based adventure that includes random encounters and combat against various creatures, like various pokemons and the terrible goombas from the 1993 Supermario movie (yea, the one with Bob Hoskins, John Leguizamo and Dennis Hopper!). Combat is not that difficult (due to the fact that characters regenerates MP and some skills have no cost) or frequent (except for the cave with the Zubats... that cave has very frequent encounters and those Zubats are the worst! I was rarely able to run away from them, unlike other enemies, and they hit hard. Also they are often found in pairs), but remember that 1) you can save anywhere and anytime 2) Toad can heal your party for free, so keep your items from the most dire situations! 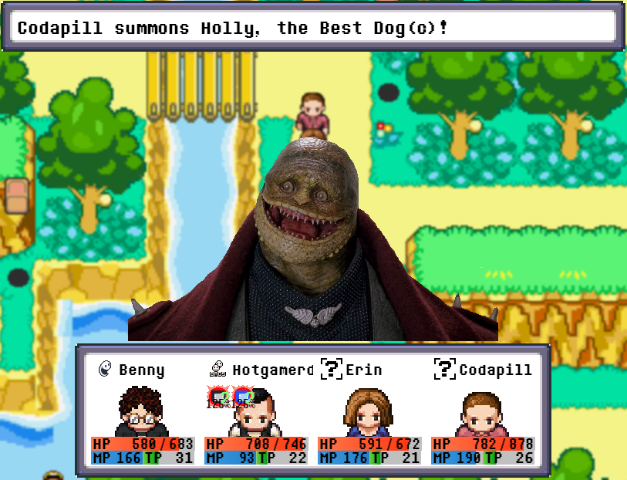 Combat! We have various party members like Codapill (author of ChickenQuest 2K3!), that can use a random skill, including some taken from other characters!

Besides collecting items (mainly consumables, but there are also some weapons too!) and dvds, that also give you some interesting & funny reviews of some popular tv series, movies and animated films, you will find some extra party members (the game starts with CashmereCat, hotgamerdad and Riggy, BUT you can have a party of four, even if the first two must always be part of the party... because their names are in the title! Of course!) with different skills and abilities. Each party member can level up after some combat encounters, but they all start with four skills each (and they do not get new skills as they level up, they just improve their abilities), and I'm impressed by the variety: almost everyone has some kind of healing ability, there are special attacks, buffs and debuffs. For example Riggy has a special attack from his game Deluge, Cash can heal characters with the RpgmakerCola... but Erin's Pub ability is probably the most overpowered since it has no cost and will heal all the party, even outside of combat (extremely useful in Lisa's world). You've been warned, you need Erin to become unbeatable, of course!

But ok, just half of the maps include "dungeons"... or better, maps with random encounters, the other two are different but I will not spoil you the fun of discovery, in any case mapping is pretty good, sprites are clearly borrowed from various games (of course! You actually visit other videogames levels!)
Anyway let's see some notes I took while playing the game:

2) I noticed that there are four other teleports that are locked. Sadly I expected it was possible to visit some other worlds because I had fun, but ok it's a game made for a jam, so... it's ok even if the ending is a bit abrupt. Still fun!

3) There are no game breaking bugs but just some (really) minor issues for example:
- hotgamerdad's character isn't visible on the save slot.
- you cannot open the upper box in Mario's World.
- you can walk on part of the sky near Terry in Lisa' World. 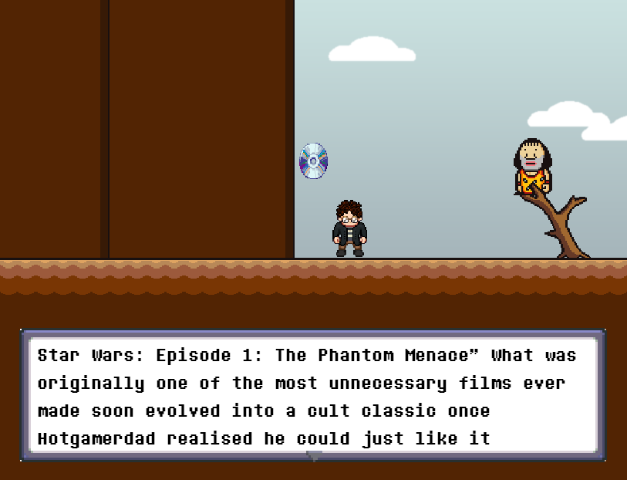 This place and that guy on the right are familiar to me! Uhm. Anyway I agree with this opinion on SW Episode 1!

Final Verdict
Benny + hotgamerdad and the Bajillion DVDs is a funny community one hour game about movies and videogame. I liked the references to various movies and videogames that you can find (like Frogge's Yoshi goes to Tesco, Codapill's ChickenQuest 2k3 and their bigger cousins Supermario & Undertale of course!). The difficulty is well balanced, the various worlds aren't really big but also not that small either, there is a mish-mash of graphic styles that you will probably recognize if you played those classic games, and the reviews of the various dvds are great! A cool game for me, and since it was made in few time for a jam... it's a lot, and being a game about videogames and movies I cannot rate it less than good!

author=CashmereCat
Oh, and one changelog entry i missed…
- Buffed hotgamerdad

LOL I liked him weak! It became a sort of routine having to revive him each time looool!
Nah you did well!
CashmereCat

Changes made:
- Increase MP cost of erin's Pub Crawl from 0MP (!) to 35MP
- Make Justin 40% resistant to Paralyzed
- Changed save system to one where hotgamerdad actually appears as a face
- Decapitalize erin's name
- Add botnik
- Add undertale Snowdin Town music to undertale world
- Made Snowdin Town loop correctly
- Make Benny's 4th ability actually do damage
- Mario box up top fixed
- Made it so you can't walk into a tree near Terry in LISA world
- Fixed Toad facing the right way now instead of away from you
- Nerfed Zubats
- Fixed bug where two types of encounter systems for Zubats were stacking on top of each other T_T

It's not a gag it is a low rating of the Jojo Phantom blood DVD, one of the collectibles.

I think at this point, almost everything is a gag, so no worries XD hotgamerdad said he is a fan of the show, and I know nothing about it, but I'm interested to see! The game itself just has a very dismissive nature towards everything in general, so hopefully that came across LUL

author=CashmereCat
Blame the opinion of JoJo on hotgamerdad! (I've never seen it and can't even remember what gag he probably inserted in there loool) ;)

Heh you take the blsme too for this lo
I also won't blame hotgamerdad I already let him die too many times in my playthrough!

It's not a gag it is a low rating of the Jojo Phantom blood DVD, one of the collectibles.
Uhm I could agree with some opinions for example on Shawshank Redemption AND especially Pixels, anywayyyy not on Jojo since I am a fanboy...I'm even making a new avatar for myself with me and Klaus from Rm2k3 as a Stand. Lol

Close
09/14/2022 11:57 AM
Blame the opinion of JoJo on hotgamerdad! (I've never seen it and can't even remember what gag he probably inserted in there loool) ;)
TheRpgmakerAddict

author=CashmereCat
Gah! Thank you for this kind review, RPGMakerAddict. I've told hotgamerdad about this review, and he's super chuffed.

I'm very happy that it resonated with you, with all its silly humour and child-like wonder, staring at the stars over yonder. Glad you caught the references to "Yoshi Goes to Tesco" and "ChickenQuest" in there, particularly since Frogge and codapill are great friends, and we love to shout out our friends. If I make another comedic game in future, I'll definitely try to remember to add a character based on RPG Maker Addict ;)

I will debuff the Zubats and make some other small changes, including some issues that need fixing that you found. Thanks for doing that. :D

Nice. But I'm still disappointed by your (low) opinion on Jojo! LOL!!!
Hehehe anyway yes, movies (I hate Pixels!) and games (I love Lisa the Painful!) it's a great combo, nice abilities for the various characters, even if I admit I have my favourites.

It's a funny romp indeed.
CashmereCat

I'm very happy that it resonated with you, with all its silly humour and child-like wonder, staring at the stars over yonder. Glad you caught the references to "Yoshi Goes to Tesco" and "ChickenQuest" in there, particularly since Frogge and codapill are great friends, and we love to shout out our friends. If I make another comedic game in future, I'll definitely try to remember to add a character based on RPG Maker Addict ;)

I will debuff the Zubats and make some other small changes, including some issues that need fixing that you found. Thanks for doing that. :D