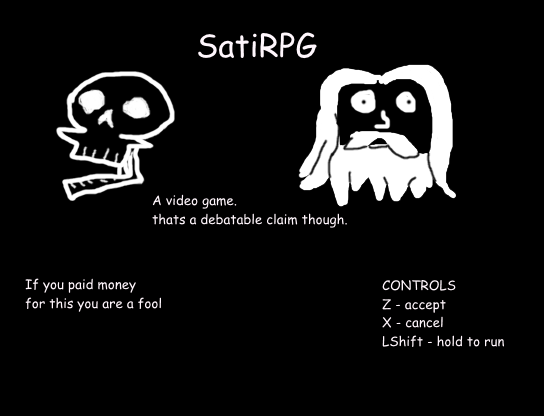 A skeleton and his crew...

Welcome to a new review, of a really fun and pretty long game (took me about more than four and less than five hours to complete), SatiRPG!
SatiRPG is a game made by hotgamerdad using RPG Maker VX Ace that was developed during the start of lockdown in 2020 for four months. This can be defined a "Lol jrpg", or a humorous but quite long classic rpgmaker game, not unlike Dog Adventure, that I reviewed some time ago, and if you liked that one you will like this game too. Some common traits of these games are: mismatched portraits/battlers, memes, humor (jokes and 4th wall breaking are common) and nonsense, all wrapped around a classical RpgMaker system.

SatiRPG is the story of Skellington, a classic normal (well, if you played any kind of rpg you know these creatures) animated skeleton that is fated to save the world(s) from a terrible menace called Nega-Skellington, or this is what says him a dude called BroBot. Since Skellington has nothing more interesting to do, he decides to face the evil Nega-Skellington and his three minions, and in his adventure he will be joined by Bob the Bean Druid, and later also by other quirky characters. Because you know, this world is bizarre, still it needs to be saved! 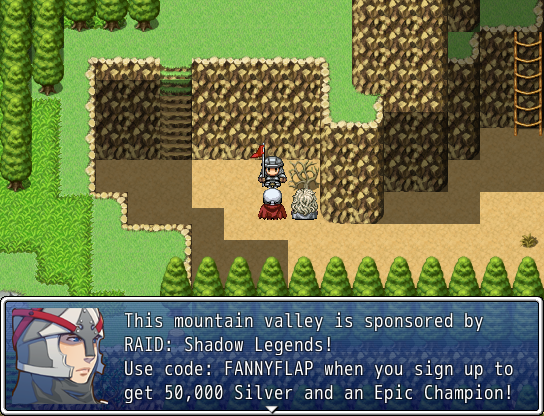 Oh no. Nononononono. NO. PLEASE SHUT UP!

So, the plot in essence is nothing new (quirky characters aside, I mean this could be a serious game... in theory!) and the gameplay, instead...well, it's nothing new too: to defeat the evil goons we have to explore the world completing main quests and secondary quests, solving puzzles and completing task. Remember to save since you can always do that anytime and anywhere, but the game will remind you this just in 2-3 parts. And what about battles? Well expect fighting enemies in many random encounters (but you can easily flee if you want) and bosses in epic battles that may be optional or mandatory to complete the game.

Yes, because despite the humor of the game, in SatiRPG you should be ready to fight the most evil creatures ever seen, like for example: Pokemons, Cactuars, Yetis, 1997 Ford Escorts (yes, the car!), Santa's elves, Doomguys, and Bitcoin Ninja Assassins! But what about the bosses? there are several of them, as I said some obligatory and others optional, so prepare to face Shrek from Shrek (whose battle song is All Star, of course!), Dio from Jojo, and Robbie Rotten from Lazy Town, to name a few. 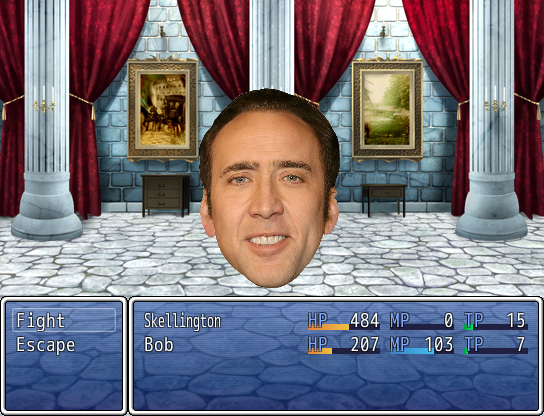 One of the many enemies you will face (hehe FACE! Or should I say "FACE-OFF"? Lol). I'm sure you already know him!

The interesting thing that made ma like this game even more, is that combat is (surprisingly) actually fun! The characters have solid abilities: Skellington is a classical physical character that starts with a multiattack Cleave ability (weaker than a single attack) and a skill of healing himself, both of these cost TP, anyway later, after getting some levels he'll get a strong magical attack that costs MP (mana, not used for anything else) and a weaker attack that instead recovers some MP. Bob the druid is instead a magical user whose physical attacks are ridiculous but can heal and revive the party members and use a magical attack for some decent damage. This cost MP, BUT he has a skill that once he gets enough TPs, he can use them to unleash a powerful blow that also restores his MPs! See? Each character has various ways to attacks and restore their resources. Baron Zeppeli (from Jojo Phantom Blood) is another interesting character that uses the Hamon/Ripple/Wave Energy, meaning that he has to spend a round breathing to power his techniques, while Gnoah is a sort of young orc armed with a big gun. Cool different characters, no one is useless and all are fun to use!

Ok, now you will expect to earn experience points from all these battles. Well NO! Random encounters are totally optional (I wanted to say "a waste of time" but it would sound harsh isn't it?), unless you want to amass some gold coins (well if you manage your characters well you will not need a lot of consumables, so you do not need to farm a lot of gold!), and you can always escape, moreover the only way to get experience is by reading! Yes, because KNOWLEDGE IS POWER, so look for books, magazines, comics, and use them to earn those much needed XPs that make your characters stronger, tougher and faster, but they also let them learn new skills... well sometimes! 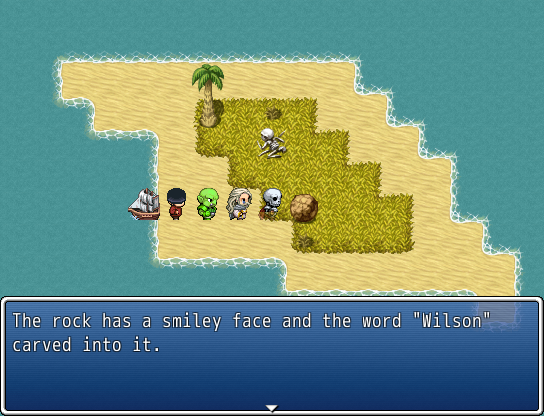 This seems familiar to me. I've a sense of deja vu!

You will get these items doing quests, and sometimes you may also earn one or two accessories that can give some interesting bonuses like a poisonous attack, a higher critical chance, or a faster TPs regeneration. Loot can also consist of consumables like foods (from onions to better dishes) that heal, coffee that is used to resurrect characters and other varied items... but no potions, nah these are totally useless here! What you also won't find is the necessity to upgrade armor and weapon, since the characters will not find new ones, but I do not mind this simplified equipment setup and management.

The sidequests are sufficiently varied and never too complex or obscure: there are classic fetch quests (like "find that item/person/animal/location and come back"), puzzles, quizzes and so on. Most of these were pretty easy, and many are also optional, so you can ignore them. But please don't, because it is fun! Speaking about the "fun" factor, I know this is something subjective, but I must admit that SatiRPG entertains, since there are a ton of interactions and things to inspect/collect with often amusing results. 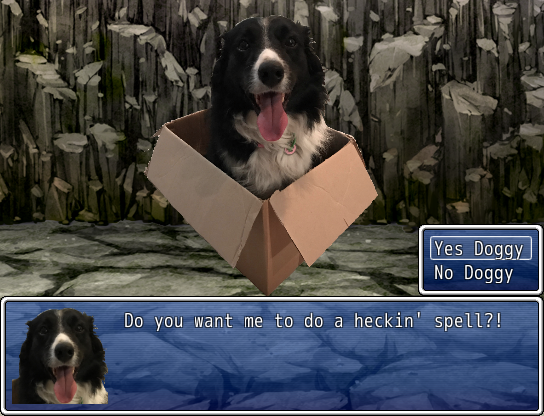 Well, you won't be able to say no to doggo. Don't you?

Now let's talk about visuals and music: as every other "Lol jrpg" SatiRPG is another game that uses classic RTPs mixed to custom made assets taken from various sources: Pokemons, Minecraft, Team Fortress, Sonic are just some examples, then add also pictures from every corner of the internet, including popular memes and characters, and also not so popular individuals and things that you may not know. Well just accept and play, clearly you will have more fun if you recognize the parodies and have played other rpgmaker games, because SatiRPG is just one big parody. And what about sounds and music? It's the same, the aim of the game is humor, not realism, so listen to Spooky Scary Skeletons, All Star or other famous songs besides some classic soundtracks from popular videogame or other media (for example Final Fantasy and Jojo) hear weird noises and add classic Rtp sounds to the mix!

Mapping is pretty much ok, there are some maps that I did not like so much, like the purple swamp, that's mercifully not dangerous (unlike other games where that purple floor is often poisonous! Ykes!), the river maze or the final zone, but on the other hand there are some really nice maps like the northern valley and snowy mountain or the islands. Well maybe I also hated the former also because you have walk all the way back to the forest, anyway in the end mapping is more or less fine, except maybe for some odd places and the very first area, that's a bit boring, but it gets better!. 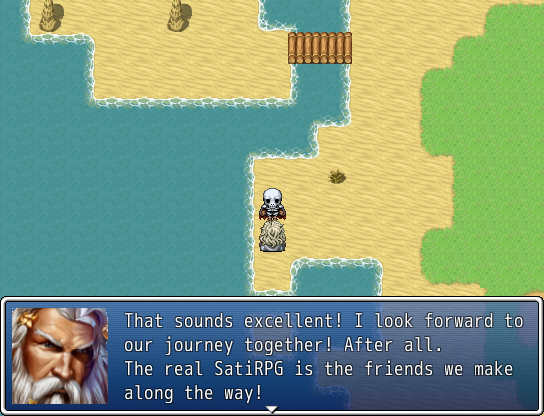 Bob the Bean Druid and his words of wisdom!

Final Verdict
Ok, first I'm probably biased because I liked this kind of parodied that make fun of more serious games and their cliches. In these cases I also do not mind the mix of different graphic styles, it's for parody & humor! The game is very easy, I mean I like doing every single quest and talk to everyone so I was probably overpowered and combat was a breeze. Ok, I skipped a ton of random encounters (and I completed I think 90-95% af all the quests, so I surely missed something), but there was no use to spend time fighting, anyway the encounter rate is ok, not excessive at all. Luckily at a certain point you may get the Wonderwall Music Box that let you avoid random encounters, but happens later during the last parts of the game. Oh, and by the way I liked the presence of a guy that gives hints about the adventure, most of them are quite useful if you are lost!

SatiRPG is an extremely cool game, I admit it start a bit "ok" but becomes better and better as you play, entertaining with some bizarre events, characters, pop culture references and memes, of course! I like these, so I liked this, it's really that simple!

Close
09/27/2022 08:37 PM
I really need to finish this game but I agree with all this! The most surprising thing about this game is how solid the battle system is.

Can’t wait for hotgamerdad’s next game, Our Barren Earth!
TheRpgmakerAddict

author=CashmereCat
I really need to finish this game but I agree with all this! The most surprising thing about this game is how solid the battle system is.

Can’t wait for hotgamerdad’s next game, Our Barren Earth!

Oh don't worry the game and also the final parts aren't really difficult, and that's a good thing since I like having fun without having to sweat in every combat encounter or fearing I did not level enough!

I admit I did not explored 100% of it so I may have missed something. Anyway it's fun, I'm only sad that Zeppeli is a temporary companion because I enjoyed a lot using him. He has the best attack powers and system pity he's playable in few encounters only.
Yay, looking forward the next game!
CashmereCat

And yes, hotgamerdad’s next outing looks very ambitious and promising. It looks like LISA and I trust his instincts. Definitely one to look out for :)
hotgamerdad

Close
09/27/2022 10:20 PM
Thank you very much for reviewing my game and giving it 4 stars! As promised, the hitmen will return your family by sunrise tommorow.

but on a more serious note thanks for pointing out what you think does and doesn't work. It's all stuff I'm taking to heart so that my next steaming pile of rpgmaker is that much better for it.
TheRpgmakerAddict

author=hotgamerdad
Thank you very much for reviewing my game and giving it 4 stars! As promised, the hitmen will return your family by sunrise tommorow.

author=hotgamerdad
but on a more serious note thanks for pointing out what you think does and doesn't work. It's all stuff I'm taking to heart so that my next steaming pile of rpgmaker is that much better for it.

Oh well anyway I admit that sometimes I should for example take my time to talk with people... the hint guy is pretty useful (well it would have been for finding that rope ladder kit earlier!) but I ignored him until the end! Loool! I wasn't also a fun of the boat maze but it's not really important to complete the game so it's ok. 4 is good because it's a good game, I mean even if you take away all the wackyness and silly things I liked like hunting Shrek or fighting Dio Brando, it's still and enjoyable game with solid mechanics (even if I skipped lots of battles since there is no Exp nor you need much gold due to the absence of gear...something I did not mind).

well done, looking forsward the next one!
Pages: 1