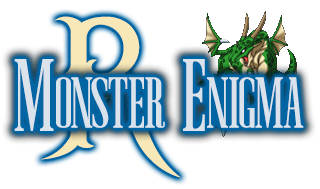 I have a bunch of games I'm doing, but I guess I shall release them in rapid succession when I'm done with them, on top of me other projects. Oh life.


This is an old game, though I am trying to make it better (hence REDUX), because the first one is too short and almost too comical. And old. Thank wind that I keep getting better (this is also a recurring joke in the game).

Dyluck wakes up one day to find his girlfriend missing, only to be perturbed by a troll going by the name of Orock. After getting zapped by Bolt Darkness (not really), he babbles about his master, and soon runs off, leaving Dyluck confused. Though he soon runs into a cat girl named Kataryn, who had a run in with Orock, the same things happening to multiple people.

Though in search of Diana, something feels off in the world of Borderia. Who is Orock's master? Is Diana involved? All in the story of Monster Enigma Redux.

DYLUCK - A hunter at heart, and takes life either seriously or comically. It's the way he's been since day one, really. The idea that there might be a creator, is a bunch of wind to him. He relies heavy on ATTACK and uses some SPECIAL ATTACKS.

DIANA - Dyluck's girlfriend and mystic, and it is thought that she has a divine connection to nature (Is she Psychic? Dyluck is not even sure). She is very smart, and tends to correct Dyluck. She isn't a pushover, either. She relies heavy on SPECIAL ATTACKS and specializes in her whip as a weapon!

KATARYN - A cat girl that has a fascination for Dyluck, though she is seemingly trying to get hooked up with Dyluck, but Diana keeps her in check constantly. She is very agile and uses both ATTACK and SPECIAL ATTACKS. Inside, she's really, really lonely.

BLOSSOM - Dyluck's past girlfriend(?), but who is she? She is an inventor and is very versatile in technology and SPECIAL ATTACKS, and is really smart. She's quirky and cute, and Dyluck had a giant thing for her but it didn't workout, but they still remain friends....

RAIDEN - From the original, Raiden is a WYVERN and very protective of humans, hoping that there is future for dragons and monster-kind. Though, he had to teach Deathagon a lesson, that not all monsters are evil. Raiden's SPECIAL ATTACKS range in the fire and ice elements, though Raiden is slow because he is a Wyvern. He is very keen and a very smart dragon.

OROCK - One of the main antagonists that ends up joining the party, a red troll and somewhat of an oaf. He's very misguided and not very smart, and struggles even being a troll. He is a physical powerhouse, and uses some SPECIAL ATTACKS, but magically is not strong in that. Subconsciously, he's trying to get away from his master because he thinks he's crazy, revealing much later in the story...

LIZ - A medusoid that once was on the side of darkness like Orock, then rebelled and has a strange and enstraged fascination for Dyluck. Her personality is very dominating, though she hides a sensitive side behind her ego. She is both fast and has high S.ATK and SPECIAL ATTACKS!
~


I may end up making either 8 or 12 usable characters in the story. 12 is pushing it. Monster Enigma Redux will have an interesting set of music, some from Kirby Warrior RPG III, will be somewhat comical with recurring jokes, and will retain from light to dark themes. It may be epic, as long as I do not derpify it. Whether this will be done, I have no idea. But look, an actual game, like where are RM2K classics anymore that I haven't played? ;_; This game will use resources from the RTP from 2000, 2003, VIRPG, and other various resources. Hopefully this will break and make the RTP sing a bit better. Worklife is fun.

The First Level is a Pokemon Canyon

Portraits when you encounter new characters