It's time for isekai!

Gooood day!
And welcome to "I got reborn as a Demon Queen but blah blah...". Sorry title is too long for me, so I will call it just "IgraaDQbIscmaGF"!
Well... on second thought nah! Let's just name it "I was reborn as a Demon Queen", and yes, this is a game, made by Psy_wombats and Seiromem for the 2022 Swap in the Middle with You event. If you do not know what's that I do not care, I 'm here to talk about this game, a sort of simple fantasy adventure with some points in common with another game made by Psy that I liked, Slay the Lizard of Lunenberg, that features a very similar fantasy setting, the same graphic assets and consists in an adventure with no combat. Here it's exactly the same, but as usual let's start from the plot!

Marissa is our protagonist, a student that was transferred to a new school and here nobody seems to like her, but hey making friends is not easy at all! Anyway during a snowfall se has an encounter with a strange creature and... she is suddenly transported from their world into an unfamiliar one, inside a different body. Ok, this happened because the demon Maou has chosen her as a queen (well you read the title didn't you?), that does not mean as her consort but rather as a servant. A servant of darkness, whose mission is to recruit three heroes for an important quest. Good luck, Marissa! 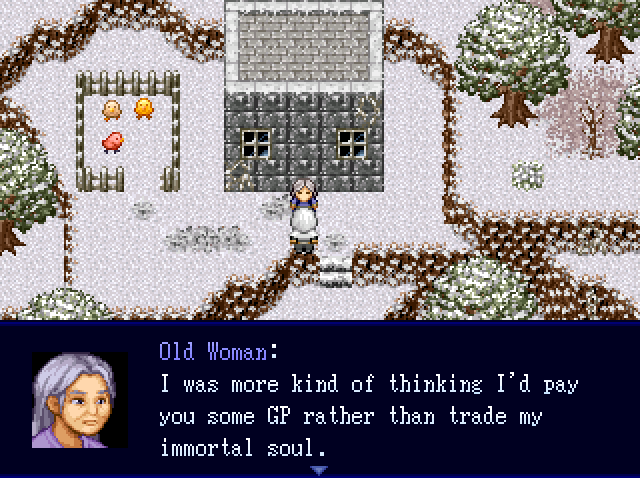 Ooooh but why? You're so stingy and mean!

Ok, so now we're here, serving a demon in a fantasy world. The game is an adventure in which we have to find these people you need (and I'm not going to tell you who are these three, of course! I had to search for them, so you must do the same!) and make them join Maou, so Marissa has to befriend them basically by solving their problems. It's a little lighthearted adventured that took me exactly 32 minutes to complete, and takes place in three locations: the palace of Maou, a village and the nearby forest. The game is pretty simple, anyway if you have any trouble you can ask for help to the wise bear, IF you solve his riddle/quest (pretty easy, but I think also totally optional).
About the game there is not much to say, it's cute, has some cool and humorous dialogues, and it's a simple adventure with no real puzzles, just some tasks, fetch quests and so on. Still it entertains with a lot of interactions (most of them not important to the story, but hey we're here to have fun and enjoy an adventure).

Mapping is VERY good: the white screw shop assets are used very well, I liked the various locations, the characters are appropriate, and that's all good except for a little error that transforms Marissa in a monster during the final cutscene... BUT that's a little mistake, pity because for a second I really believed she became a fantasy creature... it would have been fun, but no!
Music is good even if the only theme you will hear a lot is the one on the village, the wilderness areas are eerily silent, unlike others like the palace and other places that use classic Rtp music. Soo nostalgic.

I've also two questions: in the beginning you find a book that technically can be used to learn a skill but no one can use it, and skills aren't even available in this game. Second, the writing on the blackboard (HINT: read it) mentions the last stall on the left in the bathroom... but it's the one on the right isn't it? Anyway these and the other I mentioned before about the final cutscene are the only issues I found with the game, for the rest it's a pretty enjoyable little adventure with no risk of death or getting stuck anywhere. But you can also save, if you want to stop playing and resume it later. 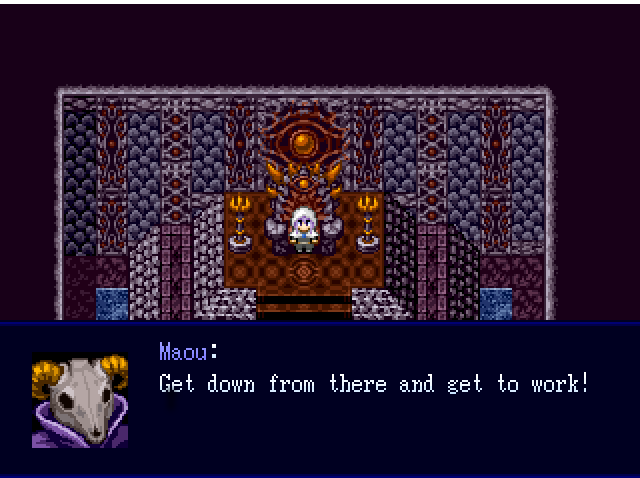 Meet Maou. Hey, he is the boss!

Final Verdict
"I was reborn as a Demon Queen" or "IgraaDQbIscmaGF" is a short and cute adventure game, pretty simple even if I needed the help of the bear to understand what I was supposed to to, but it's not difficult at all. Is it enjoyable? Well, for me (even with the little errors mentioned before, that will be probably easily corrected soon) it was, and I'd have probably liked it even more if it was longer, especially the ending that's a bit short but nice (and not really abrupt), after all I also understand that the time restrictions of the contest are... restrictive! So it's nothing new or original, but it's a solid and enjoyable game if you like this kind of games (I'd mention again Slay the lizard of Lunenberg of Psy, Seiromem's games I played were a bit different) and parodies. Nice entry, pretty good!

one of these days I will make an actual RPG with whitescrew, I swear
TheRpgmakerAddict

one of these days I will make an actual RPG with whitescrew, I swear

I dunno for the music, I'm sure that the forest is totally silent. And also the wilderness area before the village.

Uhm weird, I believed I tried using the textbook with everyone, including both Marissa's forms and never worked, I even assumed it was made for some other character...

Close
09/29/2022 02:35 AM
ohhh I think the problem with the textbook is it doesn't remove itself after use (unlimited uses) so it kind of seems like it doesn't do anything
Pages: 1