Hello!
Heisei Pistol Show (平成ピストルショウ) is a free RPGMaker2000 adventure game made in 2008 by Parun (creator of the probably more famous horror Re:Kinder) and translated by Patchy Illusion Team in 2022. The game takes inspiration from the movies "Pistol Opera", "Memories of Matsuko" and the traditional japanese kabuki theatre, offering a bittersweet story and a psychedelic weird setting.

We play as Heart, a gay hitman in purple lolita-style clothes betrayed by his ex-lover and looking for revenge. Like Stray Cat from the movie "Pistol Opera", Heart has to face three other higher-ranking assassins before fighting the former lover. Be warned that despite some humorous moment and the cute style of the artworks, the story is dark and tragic, including mentions of sex, violence, suicide, child abuse, drugs, and alcohol.
The game is pretty much linear and features just a single ending, even if it includes a postgame content (with notes, extra dungeons and dialogues). 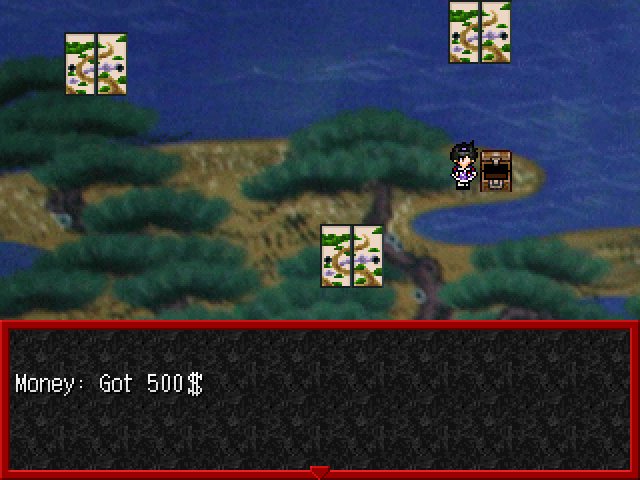 We need money, money to buy all the guns from Grandma!

Now, in this game we control Heart, and his friend Pistol, while they wander a bizzarre world looking to collect money, needed to buy guns from Grandma, and informations on how to defeat the first three opponents. We also have to find the locations of these three enemies, but they must be faced in a precise order and possessing the right items and weapons, otherwise Heart will be defeated and recover at Grandma's house, that's the first unlocked teleport locations. The other three are the places where we'll find the hitmen, so once once discovered we will be able to travel a bit more quickly.

We can save the game anywhere, in any case don't worry since there aren't wandering enemies (except for the three targets) or any way to die and get a Game Over screen... at least for what I noticed! Now, the battles: each one is basically a puzzle in which Heart has to equip the right guns for the job and use them at the right time (the standard attack is useless against them). He can equip three guns, one in each hand, plus an utility gun, and each one gives him a special attack that can cause a determinate effect. Guess what? Some opponents are immune to particular effects, so it's necessary to buy and own all the guns to complete the game. 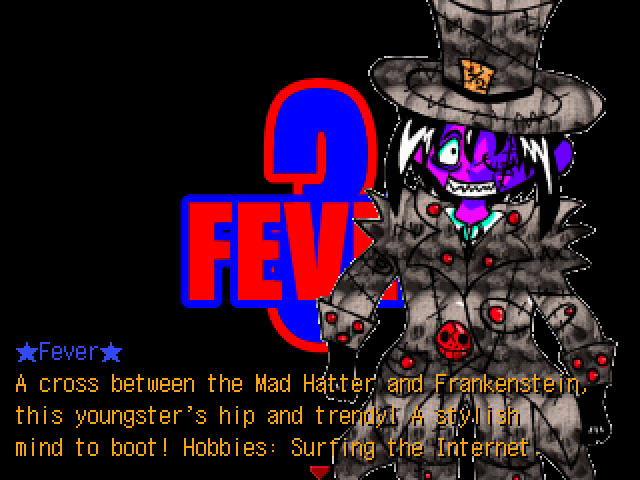 We need guns, guns that are used to defeat the other hitmen, like Fever!

Anyway do not worry! Travelling around there will be various chances to earn all the cash needed, even if this will mean to travel a lot, explore every corner of the map and also solve 3-4 pretty simple puzzles, but I admit liking them since while not overly complicated, they made me waste little time and made me feel clever! Later parts will take away the need for collecting items (the menu will totally disappear except for the options to save, resume or quit), still besides lots of walking and exploring, it will be necessary to think and chose wisely.

Besides puzzles and combat there is exploration and lots of cutscene and dialogues that will tell us of Heart and his past. This is when the game shows influences of Tetsuya Nakashima's tragic "Memories of Matsuko", with a dark story that clashes with the colorful aestetics.

Aestetically in fact the game is peculiar as it mixes colorful psychedelic dreamlike scenarios and some realistic or gritty locations (such as the purgatory or the underground sewers), where lots of different assets are used, from Rtps, Refmap charsets and also some custom made sprites. Maps... well I cannot judge most of them because they are totally crazy, surrel and incoherent(and in few cases these are made for parody reason), anyway I like how there is no risk of getting lost, since some blinking arrows will always show us the available exits. The more "realistic" places like the house insteriors are instead well mapped, sign that when needed the developer can make some really pleasant maps. Also custom made menus are pretty and colorful, sadly there are some cutscenes where due to the extremely colorful and/or flashing backgrounds the words are difficult to read. 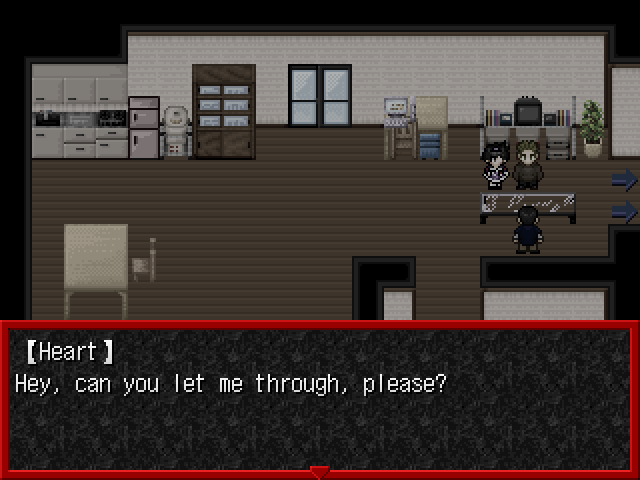 Yes please, I've to go and proceed to the...

Final Verdict
Heisei Pistol Show (平成ピストルショウ) is a really difficult game to rate: it's really weird adventure game and at the same time also pretty interesting and well made, it has puzzles, fourth wall breaking moments, humorous moments, and assorted weirdness. I liked it, the translation was also well made despite the clear difficult theme and structure of the game, for this reason is clearly a game not for everyone, I mean it's not a simple linear (tragic) story, the protagonist is an unrealiable narrator and most aspects makes little sense (but they are nice, it's art, it's a show), it's surreal and weird as the source material, and as those movies it won't probably liked or understood by most players (Seijun Suzuki's movies suffered the same fate, and these too features satire, and references to pop art and kabuki theatre, so it's not a casuality).

In the end I liked this very emotional game despite some minor flaws like the unreadable text on some backgrounds and the really prolonged final parts, it's a really unique experience and good game, if you can appreciate its strangeness!

Close
11/23/2022 12:42 AM
Thanks for the review, it pretty much sums up my thoughts after completing the game. Also, I can't recommend Memories of Matsuko enough, just go watch this masterpiece you all.
TheRpgmakerAddict

author=Ven813
Thanks for the review, it pretty much sums up my thoughts after completing the game. Also, I can't recommend Memories of Matsuko enough, just go watch this masterpiece you all.

Yes, I have to watch it since I was familiar only with the works of Seijun Suzuki, the author of Pistol Opera (after finding his popular quote I make movies that make no sense and make no money on the net I went to research what he did, and I watched Pistol Opera... one or two years ago).
On the other hand I've still to watch Memories of Matsuko!
Pages: 1