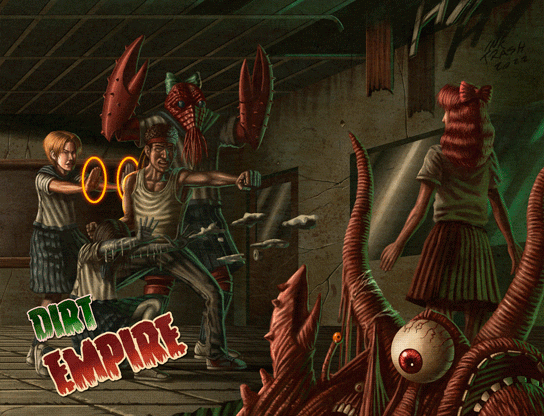 In Dirt Empire you play as a mutant named Amper. You've lived your whole life in a prestigious academy for Mutants, but now it's finally time to explore the desolate wasteland! Travel from Bio-Dome to Bio-Dome in this dark comedy RPG romp from the creator of Trash Planet and Hellbound.

Dirt Empire features a diverse cast of 8 playable characters, a morality system (which greatly effects the story), a bonding system, and a unique 'actions'-based twist on the RPG combat you've grown to know and loathe! For those who love a good challenge, the normal difficulty will demand that you manage your resources effectively in order to survive! If that sounds tedious and horrible, then just play in easy mode! No sweat!

Dirt Empire is a technically a sequel to Trash Planet, but don't worry: you don't need to play Trash Planet in order to understand the story! It's just set in the same world. Dirt Empire has been developed specifically with new players in mind.

Currently, Dirt Empire is in development and is slated for release in late 2023. Make sure to follow this page for development updates!

Cover image for Dirt Empire was done by the wonderful Ultimate Ink Trash.