I Expect You To Die

I didn't know what I could expect!

Hellooooo!
And welcome to another review of another old game!
This was made in 2009 for a 3 hour competition hosted by Max McGee on April 28th and 29th, and the purpouse was to create a game in 3 hours based on a given theme.
I Expect You To Die was one of these entries, made by Kentona that despite the ridiculous time required to develope a game, realized a complete minigame that isn't buggy or broken in any way! Kudos to that!

In this game we play as Lord Evilschtein, an evil mastermind that wants to take over the world, but has to face his nemesis, the super agent Mr Bournd from the nation of Super France! Unfortunately the agent has already infiltrated Lord Evilschtein's secret lair inside a volcano, but our protagonist is ready and has still some cards to play!

Let's see if the goody two-shoes Mr Bournd can capture him or if the mighty Lord Evilschtein will be able to defeat his opponent and activate the Doomsday Device! 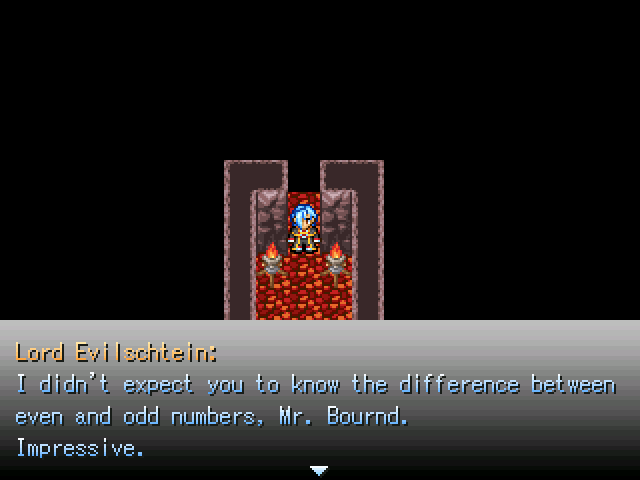 Clever, very clever, maybe too clever! Anyway it's a pity that the protagonist doesn't look like Ernst Stavro Blofeld!

I Expect You To Die is a five levels/rooms action game with a timer. Yes, it's impossible to be killed by the traps of the lair, still if times runs out Mr Bournd will catch you! Last room is a bit different since there is no timer, but it's a sort of final battle against Mr Bournd, the hated nemesis! But let's see the other levels:

We have a sort of puzzle room that reminds to me of the old classic second trap of the Graal Temple from Indiana Jones and the Last Crusade... BUT with numbers, not letters! Anyway it's pretty simple, also because you are allowed to do one or two mistakes. Then the trap parts begins: we've a section with boulders, one with wild lions and another with even more boulders. Each time we activate a trap pressing a switch we earn some precious seconds, but we may lose them if we collide with anything dangerous! The final parts with the last boulders require excellent timing, since if you have a row of three or four boulders and one of these touches Lord Evilschtein he has to restart before the first! Right, it's not that you just lose some seconds and you may go, you must do every passage perfectly!

Reach the end and you win... NO! There's the last confrontation with Mr Bournd that will determine the fate of the world, and if you will you will be rewarded by a short cutscene.

The game is all here, really. You have a menu that will just let you to quit, there is no possibility to save, no way to skip a level, so every time you fail you have to restart, but it's not too bad since it's a 5-10 minutes game! Graphically it's nothing special, there are five maps and two cutscenes, two characters, and all is made with RTPs, but for a game made in three hours there's nothing more that anoyone could expect. 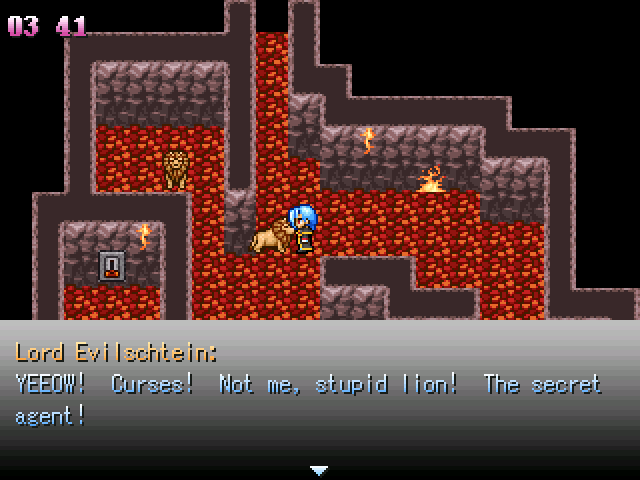 Well, that's the danger of having traps and hungry beasts in the lair...

Final Verdict
Well I did not expected such a playable and well made series of fun mini-minigames! Ok, it's not that I didn't trust Kentona's abilities, but the requirements for the contest were really strict... three hours? Including the wacky dialogues, intro and outro? whoa! Amazing!
This little game if simple, fast paced and fun, and that's probably not much else to say, I mean there aren't special graphics or great music (I also do not remember if this game has any music at all... probably not, but who cares?), but still it made ma play until I was able to let Lord Evilschtein win! So yeah, 10 minutes well spent!

The biggest challenge of this game is the dodgy hit mechanics of RM2k3 imho.
TheRpgmakerAddict

author=kentona
Whoa, a blast from the past here. Thanks for the fun review! ...which I think takes longer to read than to play the game :)

The biggest challenge of this game is the dodgy hit mechanics of RM2k3 imho.

Heh I admit it took me four tries to finish it: first time I failed the number maze, the second I was not able to pass the penultimate cave with the boulders, and the third I was caught by Mr Bournd! So it was *NOT* that short!
Pages: 1