Tale of Exile Act I

This game is the beginning of an incomplete serie, but a real gem.
Really, not a joke!

The Good
After a looooong introductive part we meet Adam, the black mercenary that looks like Guts from Berserk. The game starts shortly after he kills an assassins and captures his accomplice, and we control this bounty hunter, that is quite skilled but not clearly a veteran. Wandering the city we will find some optional quests, card games and situations that I have difficulty to distinguish the main quest from the sidequests, since most things seem connected and you have a lot of freedom of movement...
And choices... well I admit I did not experiment every single dialogue choice, clearly some are similar and others choice looked like an istant ticket for a game over, but I like the possibility to enjoy several activities (playing cards, eating at the restaurants, or just sitting at a table) that are totally unnecessary, but they show a high level of detail.

Did I say detail? Oh maps are really good and enviroments are colorful and detailed, they are also well populated and some even have hidden spots where you can earn extra loot. Music also is quite good even if I could recognize most of the themes used.

I also mentioned the dialogue choice: the game isn't really focused on combat, instead you have several quests and even more than one parts in which you have to talk and convince an audience! This was in my opinion extremely well done as it is also something that I wasn't expected to find in a fantasy rpg. I managed to pass them (they were simple even if the part at the tribunal... not so much! I saved the guy from execution just with one vote, surely it's possible to do better!)

During the game we won't use just our mercenary, anyway I won't tell more bout the story. But I admit I liked a lot how the setting is very low-fantasy and gritty: don't expect happy elves, helpful wizards and friendly dragons, this is a dark fantasy world filled with corrupted figures, political intrigues and assassinations. And, worst of all, bureaucracy. I loved how we play the ordinary life of a mercenary, where even collecting a reward is a chore. Really!
Oh and do not forget the reputation system! Another simple but nice idea. 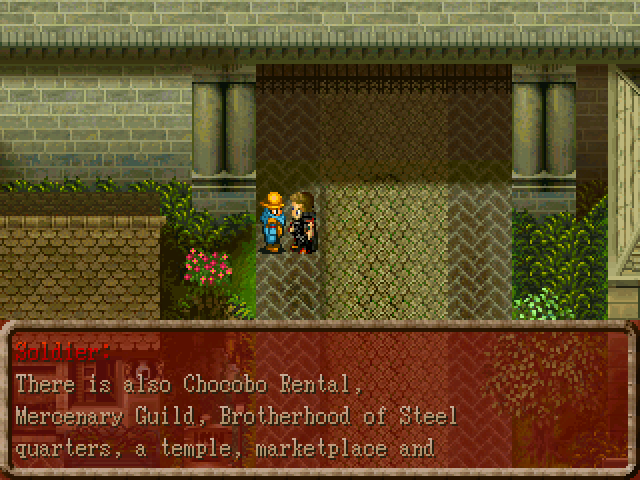 Chocobos and the BROTHERHOOD OF STEEL? Is this Final Fantasy or Fallout???

The Bad
Well there are some things I liked less: for example while the enviroments are nice I was some big difference of style and proportions between charsets, and that's a pity since other games use edits that make them more similar and harmonized with the rest. There are also some map errors in Lumberjack village, like people walking over the buildings...

Then I found the crafting/upgrading system a bit too complex, and the interface unnecessarily complicated. That's not totally bad and it looks like a traditional fantasy rpg ( and not a party-based jrpg!), but for example navigating the inventory to find the items takes more time than usual. But hey, that was an interesting choice.

Finally there are several typos and errors, and also some untranslated parts (like in the sewers, if you try to pass the two guards outside after being captured, or if you try to exit the sewers from the guarded access). Anyway that's always better than...

The Ugly
Combat! Well, yes, there are some things I hated, and one was combat. Not only it's quite complex as you have to spend Action Points that are spent to perform attacks, use items and move, but also quite difficult since I found enemies quite strong from the beginning. And also everyone has a free counterattack after being attacked in melee, but considering that we're always outnumbered and some opponents attack from distance... it's hard. Then there are some bugs, like enemies that do not move/attack and are considered dead, since I did not need to kille them!
The good part is that enemies are always visible and can be avoided, and you can in any case run from combat. It's a good thing that combat is not the central part of the game, because while I LIKED A LOT the idea of creating an AP combat system like the one used in Fallout or Arcanum I would have made opponents less numerous and less powerful in order to have easier and also shorter fights. 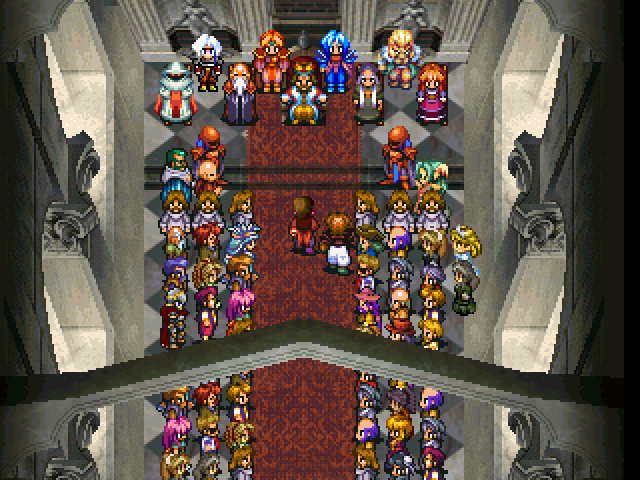 This is how begins one of the nice oratory parts! So many people, so exciting! (but I don't trust the grim hooded guy on the left!)

The Verdict
Far from perfect, but REALLY FAR from bad, Tale of Exile is a wonderful experience. Despite the inventory choices, the diary is really useful to understand what you have to do, and it's impossible losing the thread. The game does not hold your hand and rewards exploration, in this sense it's more of a typical fantasy western rpg (I mean not "oriental Jrpg", not that he has cowboys!). I also liked many references and easter eggs here and there (for example the art gallery hosts pictured by an artist that's clearly a reference to Andy Warhol) and the high level of detail and accuracy of the world, that cleary required a lot of work and effort.

So this was Tale of Exile. The usual question is: did I had fun? Well, yes, a lot.
Despite the flaws (in my opinion due to the bold experiment to make something akin to a sort of fantasy Fallout rpg) the game is immersive, enjoyable and looks good too.
Recommended, 4/5!