"Pumpkin Night" was developed by crossroad00 using RPG Maker 2003 and wss an entry in the 2009 Halloween Game Competition. An entry the developer admits was a last minute submission.

author=crossroad00
And yeah, this is very much a last minute submission. XDD

And while this explains why "Pumpkin Night" is the overly simplistic game it is. It doesn't change the fact this game is highly unsatisfying to play. This is because it's overly simplistic with the player just running around for two minutes while trying to collect as many pumpkins as possible within that time limit.

Unfortunately the game doesn't expand on this base with power ups to help the character move faster or make them bigger so they can grab multiple pumpkins at the same time. Nor does it include multiple pumpkin types that are worth varying amounts of points or include a combo system where you get more points for grabbing a bunch of pumpkins in rapid succession or for collecting pumpkins of the same type. The game also lacks pumpkins or traps that serve to hinder the player by reducing their score, slowing them down for a bit, or reducing the amount of time the player has to collect pumpkins. 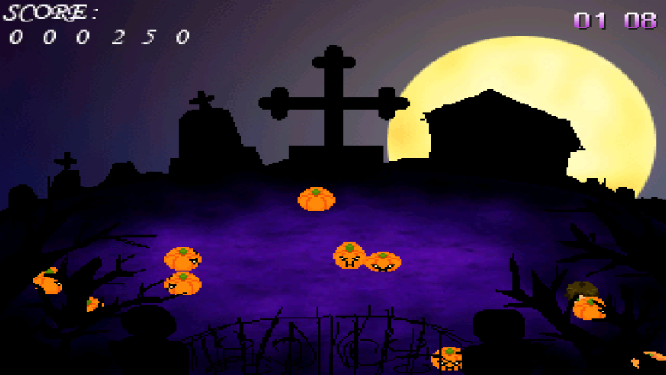 Outside of my gripes with the game being overly simplistic to the point it's boring. The game also suffers from a few graphical issues like your character and even pumpkins being hidden from view by foreground objects. And it's weird that pumpkins can both spawn on top of your character and that you can simply walk through them as well.

And I'll have to agree with another reviewer that reading the instructions for this game is more difficult than it needs to be. 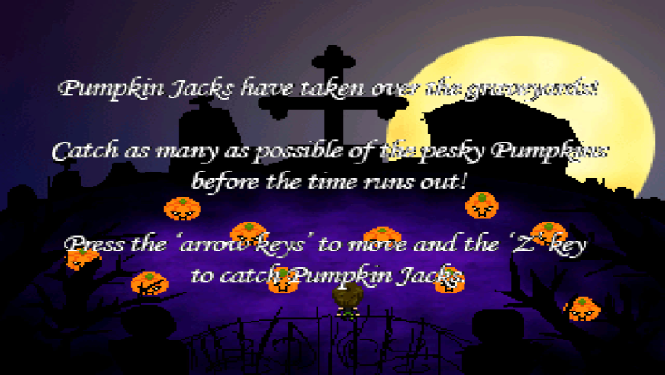 As it stands, I'd suggest giving this one a wide berth. The sad part is the underlying concept here isn't a bad idea for an arcade game, but the lack of strategic depth at play when it comes to earning a high score means this game is just a two minute time waster with a few custom art assets.