Rob the sea dog by Ascare is a pirate themed game made with RPG Maker XP. After the ruthless pirate Cormack has stolen the retired Rob's money, he and his butler Binley decide to fly the pirate flag once again and take revenge on Rob's robber. The player controls Rob's ship and sails from island to island in search of clues about Cormack's hiding spot. But Cormack's old crew members will only reveal their share of knowledge for a certain price - which always provokes angry outbursts in pirate jargon by Rob. While not very deep, the characters are quite funny and interesting enough to keep the player going for some time. 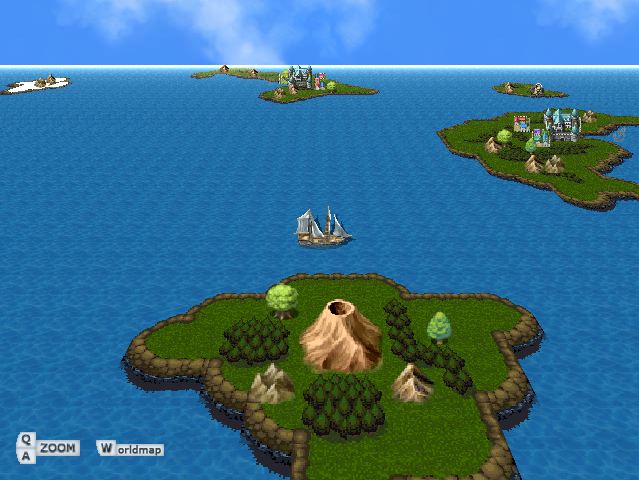 The vast ocean, isn't it a wonderful sight?


The Good (Positive qualities that justify an increase of score):
- The one thing that immediately strikes as positive is the use of the mode 7 script. This script enhances the game with a pseudo-3d graphical effect much like classic Super Nintendo games. It does not only improve the visual quality greatly, the effect of showing an horizon also fits the setting extremely well (and the use of this graphical effect is even referenced in the game itself). Also, there is a world map overlay available that can be toggled on and off and is very helpful and well-made.
- Rob the sea dog gives the default battle system quite some nice twists. Normal attacks are not available. Instead, the player can order the ships to fire their cannons, which will consume... not MP, but cannonballs. At every port, the player can buy stacks of cannonballs to reload the cannons. Also, cannonfire can ignite ships, which can be both an advantage and a disadvantage. New shacks and upgrades can be bought as well. Ships can only be repaired at ports (there are no "healing" items), but the price increases depending on the player's current amount of money, which makes money hoarding less rewarding.

The Bad (Minor issues and nuisances that usually only decrease the score if they come in large numbers):
- Rob the sea dog is originally a German game that has been translated into English, which alone is quite an achievement. Unfortunately, the translation contains many errors, which can be annoying to outright confusing.
- Among the various upgrades available in stores, there is one consumable item that permanently increases a ship's maximum HP. This item is not extremely expensive and can theoretically make any ships completely overpowered.
- The opening scene uses some odd mapping and very awkward pixelated character sprites that don't quite fit the overall the graphical style.

The Ugly (Major problems or very frustrating aspects that lead to a decrease of score):
- The promising central ideas and graphical modifications cannot distract the player long enough to see that one very important aspect of the game is fundamentally flawed: the gameplay. All crucial hints to Cormack's hideout can be obtained by bribing his ex-crewmen in different ports, either with gold or with items that can be bought anywhere. There are no other objectives or places to visit. The result of this is that all the player will be doing is grind for money, spend it at the ports for items, reparations or information and start grinding again. This becomes very monotonous quickly and, as a lot of money is needed to prepare for the final battle with Cormack, it will go on like that for a long time. Similarly, while based on a good idea, the battles are repetitive and, with only two enemy types and one skill type available, become tedious after some time.

Conclusion:
In its current state, Rob the sea dog is like a beautiful treasure chest - but it's an empty chest. The game shows a lot of potential but uses little of it, and the creator should now try to actually fill the treasure chest and make it more than just a shell. More places to visit on the islands than just the ports, more ways to acquire money and goods (for example searching for treasure in shipwrecks or raiding smaller cities), more possible approaches in battle (for example consumable battle items like grappling hooks or special types of ammunition) and more enemy types (for example different ships or sea monsters), different ways to earn the hints (for example through sidequests, special objectives or rare items that cannot simply be bought) - the possibilities for improvement are endless. The way it is now, there is simply little fun to to this game, a game that is promising in principle. I really hope the creator will try to enhance this game to make it more interesting and enjoyable to play.