Welcome to the jungle!

Calunio? My friends know him for the Beautiful Escape: Dungeoneer and Polymorphous Perversity games (I still have to play both), but... no, this is his best, even if incomplete, masterpiece.

Ok, so what's this Alvorada do Mal (Dawn of Evil)? It's an adventure about a boy, Dorio, that lives a normal life until he discover something bad, something evil, at school. And then, just when I expected just a survival horror set in the school, like some sort of american teenage horror movie, BAM! The adventure suddenly become a road movie that includes horror, gore and assorted weirdness. Amazing! 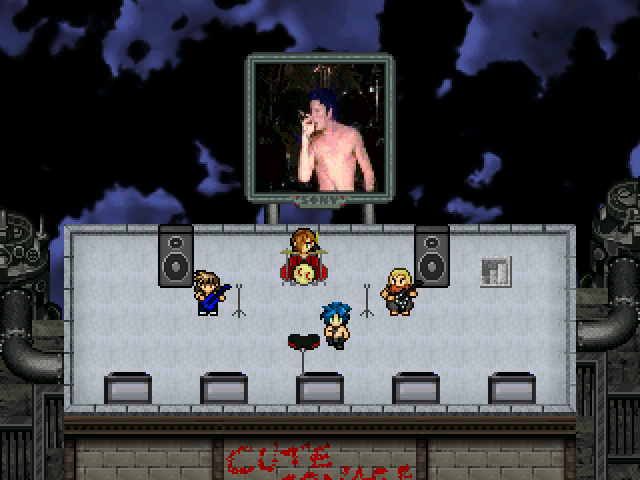 In this game music is good and the concert is great!

What I loved!
The setting is great. I like how Calunio managed to create a weird modern setting, that's really original as most Rmk resources are fit for medieval fantasy or sci-fi settings. No, mapping is good and the different environments and scenarios are well done. There are moving cars and other vehicles, and lots of other details that my be useless, but wonderfully create a living worĺd. But it's not just a modern setting, it's a weird modern setting: expect to see lots of strange and bizzarre creatures, zombies, and so on.

Sounds and music are great too. I won't forget the sound of rain when you enter the school at night. And I won't forget all the popular songs that you will hear, Alanis Morrisette, Blur, Offspring, Metallica and Eagles (and, you probably guessed it, Guns 'n Roses too) are some of the artists whose songs you will surely recognize during the game.
Did I expect this choice? Not at all.
Did I like it? Yes, a lot!

And another nice thing is the fact that you can save almost anywhere... well almost because in some maps you cannot, and one of these, oddly is the world map!

Then you have the minigames: some will give you items and/or experience points, others will let you earn money. We have for example knife dodging, a singing minigame, guitar playing and others. Most are some sort of quick time events, but the difficulty in most cases seemed balanced to me.

In the end you have the choices! YES! Many choices, some will change just the dialogues, others will change your party composition (I was able to earn an extra character the second time I played the game), and one will modify your character (later you have a choice that will modify both the main character appearance/clothing and abilities). This was cool! 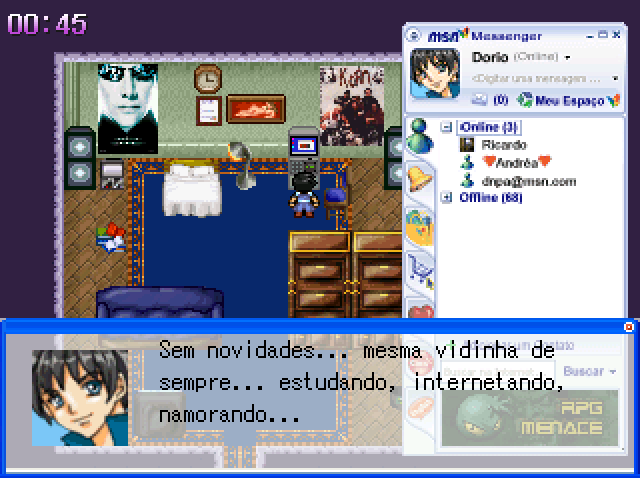 What I hated!
I found combat to be quite hard, well maybe it's me, and probably that's because of my terrible portoguese. I do not know, but I had to grind and to partecipate to any minigame I could find since they give you experience points too. The first party members you will meet are really low level and weak... no, wait useless is the right word (and if they are unconscious they won't get experience points and level up!).
Also some non-combat parts are hard like escaping from the principal at the beginning.
But...buuut... I know this is a demo and not a complete game, so I will not judge this too severely.

Then there are some little bugs/oversight like multiple copies of the same character in some locations, but nothing game breaking.

Other things I did not like was the use of (sometimes too frequent) random encounters, the impossibility to flee from combat except when you surprise the enemy (a rare event) and the old Rmk battlers...ok, they are edita but they are still those ugly sprites that look so bad. I'd ha e preferred some sprites in the same style of the charsets or even no battlers at all. Monsters instead are of varied styles and quality. 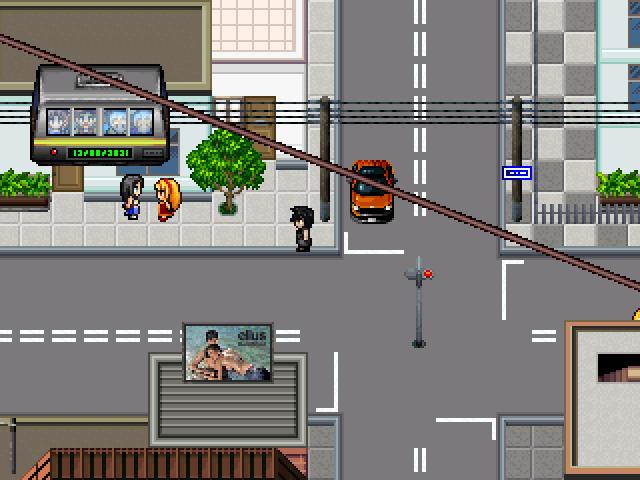 Both the cars and the cableway are animated! Really!

Final thoughs
This is a game that is difficult to judge: it's incomplete and has some (in my opinion) problems with difficulty balance, BUT it's a really inspired game, with a lot of details, character and style. I loved it! Both story and assets used are great, both music and graphics are nice and I find It really entertaining as it keeps you involved and curious about what is going to happen next. A weird world and a weird but inspired creepy and crazy tale like no other.
4 is my vote! But if completed and fixed it would surely get more. Lots of fun.

I wonder... do you speak Portuguese? I couldn't tell since you didn't comment anything on the story/dialogs/characters. If not, must be weird playing this game.

author=calunio
Wow, I wasn't expecting a review for this game! It's a game I started in 2004 (15 years ago!) and stopped working on in 2012 if I'm not mistaken, so a lot of it looks outdated indeed. But yet, it's a game I've worked on for almost 10 years, so it has a special place in my heart, and I might agree with you that it's my best.

Well I love old Rmk2000/2003 games and the style of its charsets and portraits. And I loved this game since it's not your usual fantasy/sci fi game, I liked the dark/horror atmosphere, the many choices, and the weirdness of the urban setting.
And I also loved the themes and the story, but this is mainly a matter of personal taste (I played some similar "urban horror" games before).

Anyway I waited maybe 5 years before this reviews as I was stuck in the "escape from the principal part"! But yes, at the time I had so much to play that I just tried it.

author=calunio
I wonder... do you speak Portuguese? I couldn't tell since you didn't comment anything on the story/dialogs/characters. If not, must be weird playing this game.

Short answer: I did not comment the story not to spoil the adventure, I know Portoguese barely enough to be able to play the game but not enough to judge the style or notice spelling errors.

Long answer: I know spanish, italian and other languages I studied. My Portoguese is largely self taught by reading articles or other things, so I was able to understand 90% of the game and I had no problem to understand what I had to do, where I had to go or how to use the items. But judging the quality of the dialogues (not in my native language) and explaining it in english (not my native language too) would be too hard for me!

So yeah I was able to know what I had to do with Livia, for example, but even if understanding some choices were not easy, especially the one after being disintegrated (oh by the way it's possible to kill the "night father" during the concert? I was never able to do that!)

Thanks for the reply!