The Crimson Rune: Prologue is a standard RPG that regrettably has a very long and slow intro, and that's just the title screens, and there's a font error straight off the bat. Luckily the developer has included the missing fonts as the auto font direct script isn't working, so off to install them I go (side note I think about half of the fonts on my machine are courtesy of RPG games, so thanks for that).

And back to the long intro screens. It was so long I actually timed it, 1 minute 30 seconds to get past the title and game developer self promotion, with a small break for you to give your character a name and choose game difficulty and speed, and then another 8 minutes and 53 seconds of slow moving and verbose cut scenes. Seriously 9 minutes? Not to mention the font the developer has chosen isn't one that rates high on the readability index especially in lengthy passages. 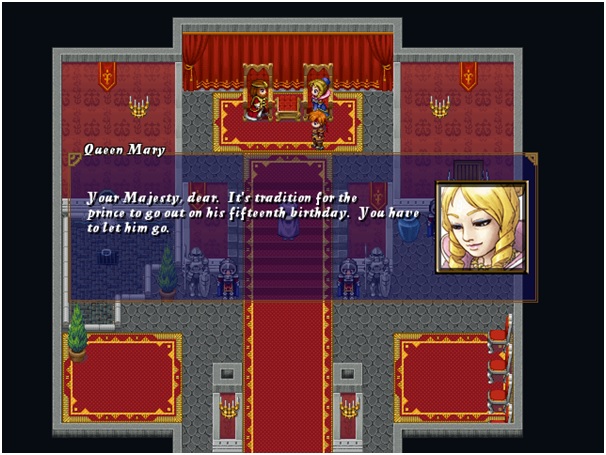 You tell him, Queenie.

So after 10 minutes of faffing about you learn there was a War of the Gods 500 years ago, you're a prince on his 15th birthday and it's tradition for a prince of this kingdom to go on his first quest at that age, and your father is a bit of a control freak. Though then again the prince is hardly a, well, prince either after taking absurd pleasure in mentally torturing a poor messenger guard with the threat of impending decapitation. Seriously that should have taken 3 minutes tops, (the intro, not the decapitation). After all that you finally get control of your character and his friend-cum-bodyguard companion and stock up on supplies, raid the treasury and every other room in the castle (though the minute spent in the infirmary was worth it just for the floating red cross on the nurse's cap), and head on out to see what the world has to offer.

There are some custom scripts employed for the shop interface as well as the default menu and whilst they aren't bad looking they are a little clunky in their execution. Having the shop not immediately deduct the amount you've spent but do it at the end of all transactions just seemed like an addition that wasn't required and slowed down the proceedings, but my biggest gripe has to be with the equip menu as it doesn't show the increase or decrease each piece offers before you equip it, you have to make a note of your previous stats to see if that new armour you just found increases your defence at the costs of agility for example. 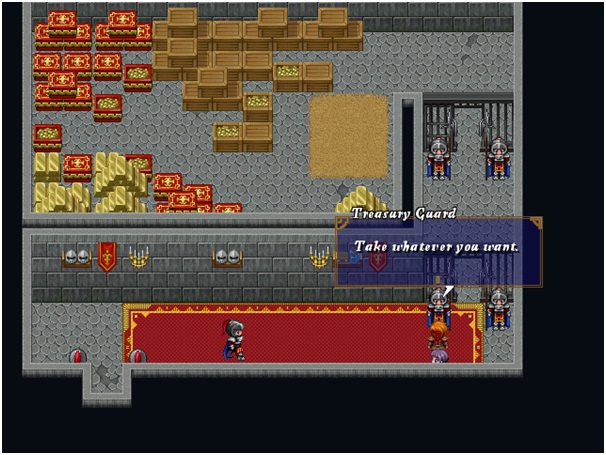 Now as stated in the game page and indeed title, this is a prologue to a larger game, so I'm not expecting something of epic length and complexity. I am looking for the hook, the reason I would seek out the next instalment in the story (though looking at the developer's profile that does not appear to have ever eventuated). Unfortunately that's not what I got, from the information provided this is pretty much your run of the mill hero's journey tale. That's not a bad thing, most games of this nature are a variation on that theme, and it's been around for thousands of years for a reason. What makes a game worth coming back to isn't just the coming of age quest, the variation used in this game, it's the way that is portrayed, the characters and world and the interaction between them.

So you head out to visit Nargethia and the Earth Shrine as instructed fighting the obligatory tutorial battles along the way. The battle system is front view ATB, in the earlier choice section I chose the wait option but I wish I hadn't. The player characters indeed do wait, the enemies do not, so whilst you are choosing your actions, they are beating the stuffing out of you, which makes the wait dynamic a false one. Sadly there doesn't appear to be any way to change your first decision. The battle system also includes a surge option, which increases with damage and enables you to use a special move once the counter is full. The battle screen has been modified to add the additional progress bars, but just like the font it's less than ideal in regard to readability, still it's not a complex system so it doesn't take too long to work out your best strategy for defeating the roaming monsters. However the balance for the costs of some skills does need to be examined, especially early on, the heavy damage skill is pretty much a one-shot wonder, and by the time you've got a decent reserve the skill has been superseded by more powerful options.

Nargethia appears to have the richest little kid in existence living there as he proposes an endless game of hide and seek, he'll hide in the town and if you find him he'll give you 100G, or choose the harder option and he'll hide somewhere in the world and give you 1000G for finding him. He's a very easy way to up your cash reserves with no downside, well until the town gets wiped off the face of the map, that is.

Once your encounter with the imprisoned Earth Elemental at the shrine is over you're pretty much on a grind trajectory, you need to get tough enough to break her out of her crystal prison and the only way to do that is to be strong enough to last as she drains you of vital energy through battle. So out you go to level up to something worthy of staying alive and bringing her back to full health.

The tile-sets in the game are all default, but the mapping shows a bit of ingenuity, with some nice overlays and shadow effects, but the map transitions aren't the best, there are definite sections where you will find yourself going around and around in circles trying to work out where to go next without realising that that particular patch of green grass leads to another part of the mountain whilst that patch over there that looks exactly the same doesn't. Still at least the developer avoided the irritating architectural pitfall of one storey cabins that suddenly have a multitude of floors and rooms upon entry. 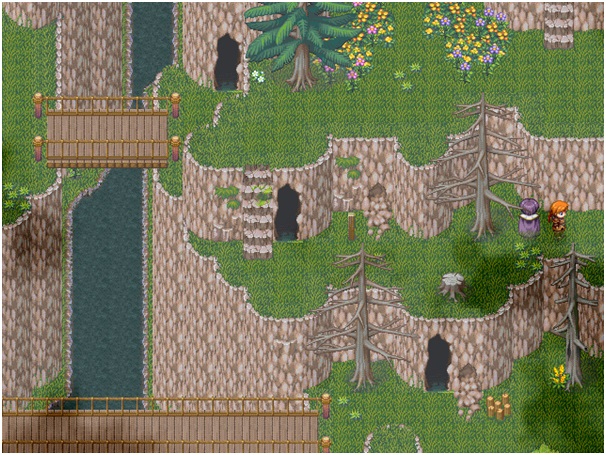 Eenie, meenie, miney, moe. On which bit of grass can I go?

The other graphics including face sets and battler sprites appear to have been ripped from a number of other games most notably Legend of Queen Opala, but that's hardly unusual, and they do seem to match the personality traits of the characters they are representing for the most part, so there is no issue with their usage in that arena. The music is a mix of the default and some custom music tracks and whilst not used with any particular flair, and at times a little inappropriately placed, it soon fades into the background so it's not offensive or intrusive.

So you eventually discover the cult hiding out in the ruins, level up enough to resuscitate the Earth Elemental, and get a handy little skill in the process, hightail it back to Mummy and Daddy to tell them what is going in and promptly get sent to your room without your supper because you're too young to go on the next big adventure, which of course sits not well with you at all. So with your Mother's tacit approval you make it out of the castle and follow the rest of the troops only to discover there's been an ambush (and it's pretty obvious who tipped them off) and you're going to have to go rescue the King, even though he's an ungrateful so-and-so who sent you to your room in the first place, and he did it twice. Not to mention the fact that if he dies you get to be King and then no-one could send you to your room ever again, though supposedly we're not into early succession planning in this game, so off to rescue him you go. You find him and then, well it was a prologue after all, so that's really pretty much all there is to it, other than the obligatory death and destruction looming on the horizon that you expect from a game that is predetermined to have a cliff-hanger ending. 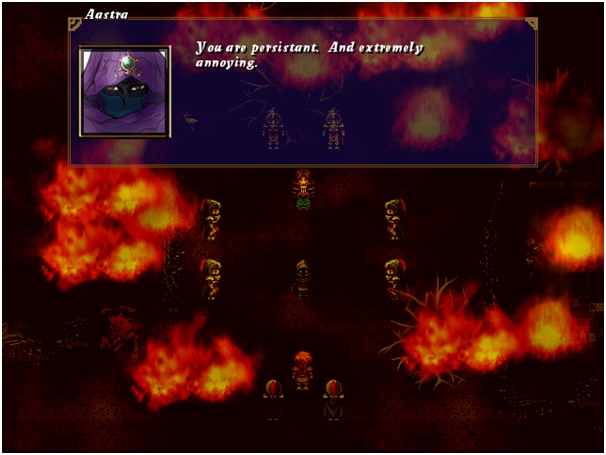 And you're a cloaked psychopath with a stupid laugh, so let's call it even.

Crimson Rune isn't a bad game; it's a relatively straight-forward RPG, centring on an overarching quest and some decent if not particularly noteworthy characters with understandable motivations for their actions. The story isn't going to blow you away but it's told competently and comprehensively and whilst I would never have hunted down the next chapter in the story if I'd run across it I probably would have given it a go. If the developer had learnt to cut down on those cut scenes and lengthy intros, that is.