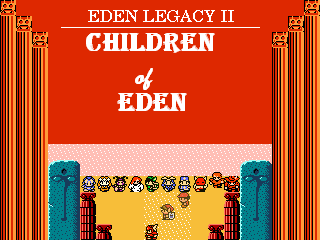 Okay, so hereâ€™s the soundtrack for Eden Legacy 2! On the top we have the 8bit renditions, and on the bottom we have the original versions. Enjoy!

Close
09/02/2010 11:15 AM
I can respect if you wish to pay some kind of homage and have them in your game, sure, I do that all the time. But having the entire soundtrack consisting of somewhat acquired taste in music, making it only bearable for the chosen few who actually like this music mixed into 8-bit tracks?
sbester
N
6409

Close
09/02/2010 05:50 PM
I believe many of the tracks take on a different sound through the 8bit format, which isn't so much an "acquired taste". Of course, some of them suffer from the bass heavy, blast beating of the ugly 8bit drums, but there is much less of that in this game than on Eden Legacy 1, and this trend will continue into the third installment.

If you listen to them all, you'll hear the major differences between power metal, death metal, folk metal, melodic metal, and thrash metal. They're nothing the same, and thus, I feel it is a very well rounded and varied soundtrack, despite featuring the same artists more than once throughout. For instance, listen to Nightwish in comparison to Arch Enemy, and I'm sure you'll realize the sheer diversity of sounds that I'm aiming for.
Mr.Nemo

Close
09/03/2010 12:00 AM
Sure, the "remixes" do certainly alter the sound and impact the song has in it's original form (especially when it comes to the vocals on most tracks, that's for sure), and yes, I realize that many of these bands have a distinct stylistic variation to them - even if that variation is purely based within the realm of heavy rock/metal. But it is still the same songs with the same progressions, same harmonies and same rythms. And when all of them are more or less based in some kind of melodic heavy metal/rock, the result with will still alienate any player who does not appreciate these bands.

Look, I could put together an 8-bit remix soundtrack of Iron Maiden, Darkthrone, Black Sabbath, Celtic Frost and a slew of east european folk metal bands and it would still sound like a collection of metal music in legoland.
sbester
N
6409

Close
09/03/2010 12:41 AM
lol very true. You've stumbled upon my ultimate plan. My hope is that some people who wouldn't normally hear this kind of music would discover they like it. I know it's always been a long shot, but totally worth it. I have no real problem alienating certain audiences in the process, as metalheads have had it done to them time and again through film, television, and radio for what feels like forever.

Well, then I wouldn't go with the 8-bit versions but rather the real versions instead. I mean, really, when it's just the exact same song but with 8-bit sound, that means it's the exact same music with no guitars, unbearable drums and no vocals! If ithe tracks were true "remixes", more fitted into the 8-bit sound then I wouldn't be complaining, but as it is now, (most of them) really don't sound very good. And neither does any other metal track I like in 8 bit format when searching for it on youtube. Not only is it unfit for the 8-bit format as it is, but the music is completely stripped of anything that gave it sound, character and soul! If you intend to introduce people to music, having them listen to butchered versions of the original music will hardly help.

Believe me, I play in a metal band AND I love anything old-school in games (all hail the SID-chip and it's prophets, Rob Hubbard, Chris HÃ¼lsbeck, Ben Daglish, etc.) but if the two should ever come together would probably be best as remixes.. at least not like these, note-by-note conversions...

these guys did it right however;
sbester
N
6409