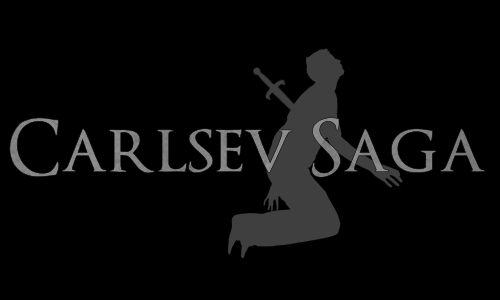 "Carlsev Saga is a good example of how an RM2k game can and should work." -- EnderX
"To say I was impressed with Carlsev Saga is an understatement." -- Gunsage
"The game is really a masterpiece." -- Gretgor
"A wonderful storyline plus an addictive combat and leveling system make for 7-10 hours of fun. Make sure you give this one a try." -- ashriot
"Carlsev Saga Episode I is a refreshing JRPG with a lot of unconventional game-play and story elements." - sunshinesan

Made in 2007 when I was a dumb teenager, Carlsev Saga was my first RPG. I've come a long way since this project. At the time, I was absolutely floored by the community's incredible response to the game (which you can read in the "What People Are Saying" section). I was really fortunate! Even Soli's highly critical review made me a much better developer. Although times have changed and standards have (rightfully) risen, I'm still happy that I was able to make this project for people to enjoy - even in its current state, which includes plenty of embarrassing quirks. I took the game down after it amassed about 3,000 downloads. I re-posted the download a couple of years ago, so feel free to give this relic of the past a playthrough!

"This isn't a "merry band of teenagers out for adventure and justice from the evil king" scenario. There are real characters, real and complex relationship trees and a real world filled with complex systems, governments and history." -- sunshinesan


Carlsev Saga is a political thriller that was designed to be the antithesis of "cliche" many years before Game of Thrones and "subverting expectations" became the norm. Good and evil are thrown out the window, for the most part; most of the cast operates in shades of grey. By the end of the trilogy, players are meant to sympathize with most, if not each, of the characters in this game. Plot twists that may seem nebulous or random will most likely be fully explained later in the trilogy or through a plot synopsis. Characters feature diverse personalities, though the details are often subtle -- much like reality.

Carlsev Saga's story centers on the small, isolated monarchy of Carlsev. This nation boasts a formidable army and advanced middle-age technology; a power called the "Essence" fuels the magic-like abilities used by many of Carlsev's inhabitants. However, the paranoid king has been withholding progress in every aspect of human endeavor. Some of Carlsev's elite figures, such as General Saito of East Carlsev, have grown impatient with the monarchy and have taken bold action. With support from his closest aide, Youngwood, the charismatic Saito leads the East into a massive revolt. A bitter civil war ensues, partitioning Carlsev into East and West. The story unfolds during the first major battle of this civil war, though what will ensue is beyond everyone's imagination.

"Carlsev has a bevy of interesting features such as alchemy, skill and magic drawing, scanning, stealing, stealth missions..." -- Gunsage


I have thrown the traditional level-up system out the window in favor of stat tonics. The four types of tonics -- stamina (HP+10), power (STR+10), mental (MGK+10), and skill (SP+2) -- must be created regularly to survive Carlsev's dangers. Alchemists create these tonics via items dropped by enemies; however, each alchemist uses a different recipe, so players must manage their inventory well.

Money is rarely dropped by enemies; instead, players must sell loot or find money in chests. However, money is typically needed only for healing items, as equipment plays a fairly minimal role.

In the second half of the game, one character can absorb and stock "Essence" spells (magic) from enemies, in a manner similar to the draw system from Final Fantasy VIII. Carlsev Saga also features a traditional four-element magic system, which must be exploited often. Players can identify an enemy's elemental weakness and HP through a "scan" ability.

There are several other twists to the gameplay. In one segment of the game, players must evade eighteen patrolling guards in an underground prison. The guards are extremely powerful and offer little reward; moreover, players receive a hefty bonus if they escape without being detected. Many bosses require the use of special commands, such as exploiting the surrounding environment or manually evading a powerful attack.


Carlsev Saga features 245 medium-to-large maps, ranging from shifting deserts to sprawling garrisons to foggy forests. Despite being my first major project, Carlsev Saga sets a reasonable standard of mapping that is being raised even higher in the second installment. Natural areas are designed as organically as possible, given the constraints. Buildings range from simplistic adobes to massive labyrinths, complete with intricate puzzles and hidden passages.

Chipsets are completely non-RTP, and include selections from Mac and Blue, gamerips, and Theo. Charsets and other graphics are a mix of RTP and non-RTP, though most are edited. (Note: I was an ignorant n00b when I made this game.)

For most players, the game will take approximately 7 to 10 hours. The first 2-3 hours are fairly straightforward, with little to do in the way of optional quests aside from extra rooms and a handful of optional bosses. The game will open up immediately thereafter, especially once you reach the Latus River Valley/Carlsev Riverside.

Hey, guys. So I decided to re-upload the original, unadulterated version of Carlsev Saga (minus all the cool things I had been wanting to put into it, and minus all the changes to the story/characterization that I had been planning). It's looking more and more like I'll never revisit this game, so I might as well have the download up here for historical purposes.

Feel free to play and review, but I think I've come a long way since making this, especially in the characterization department.
Carlsev Caverns/Mines. May be changed to Gala Mines.

An old map for Disconnect that I'm gonna resurrect for Carlsev Saga some day.

Cutscene with new font from the new version.

You have to promise me not to judge me based on the name of one of the characters. He is NOT a Mary Sue in any way, shape, or form.
DominatedMind

My son is enjoying the game, just hung up at this guy.
Deckiller

author=Stashravens
OMG Guardian! 1500 hp, what might I be missing. He either decimates the party before we can kill him, or he catches up as we are trying to put on some kind of potion juggling show for the guy. Any tips?

My son is enjoying the game, just hung up at this guy.

So sorry for not responding to this! I haven't been as active on RMN in recent years, so quite a few posts have kinda fallen through the cracks. You may have to consume some Stamina Tonics, since that boss is kind of an HP check. I wasn't too clever with balancing back then XD
Ulevo
56