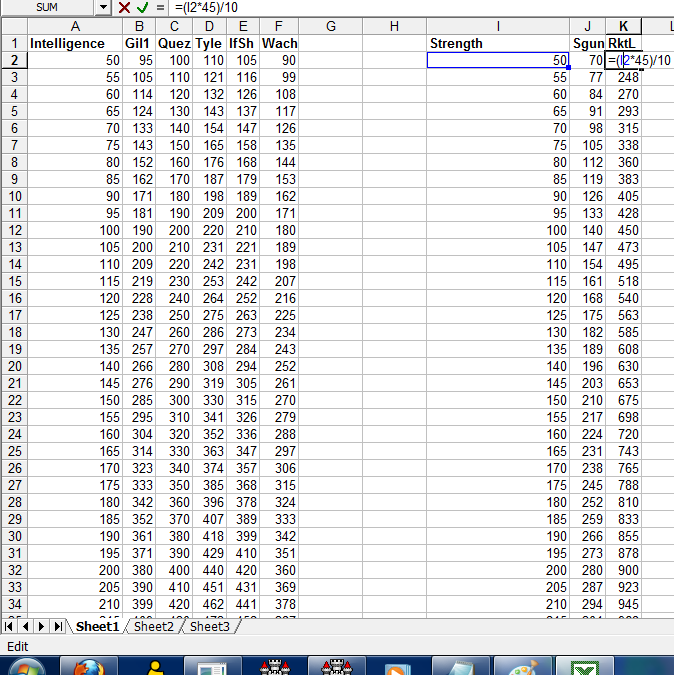 I've been using spreadsheets to calculate summon and tool damage, while comparing to generic skills and whether such formulas can be used in the maker. Yeah.

Many more to work on!

Edit: These formulas were way more complex earlier today. I'm talking about exponential smoothing variables and everything. I was trying to balance 30 hours worth of gameplay before the first demo came out, and I just said "screw it" and simplified everything.
Dezz

Microsoft Excel has many uses, my friend. Just use mathematical equations to generate cells' worth of statistics. It's all exponentially based and if you've taken basic Algebra you should already know what exponential growth and decay means.
Decky

Close
07/27/2010 06:04 PM
The formulas are actually linear, mainly to keep it simple and consistent with the rest of the skills.

This is base damage, but it's going to be more dynamic than similar-level magic. To that end, the weakness multipliers will be less (otherwise, Ifrit will deal 6000 damage at max intelligence, while Fire III will deal approximately 2650). Enemies with normal resistance to a stat will require a further multiplication of four, divided by three, unless the maker lets me use decimals. Enemies reaaaaly weak to something (600 percent weakness) will simply require a multiplication of three, as six would be overkill.

This keeps summons useful for the entire game, but at the same time not overpowered.
digitalkoifish

Close
09/01/2010 08:54 PM
Linear growth is consistent so there's comfort in knowing that every level you gain you will also increase your strength or defense by a set amount. This also helps balance issues because it's difficult to increase the stats of enemies to balance later on in the game when a character is growing exponentially and gaining stats by leaps and bounds.
Pages: 1