The Hole... Need I Elaborate?

~Prenote~ (Feel free to skip this)

'The Hole' is a small game created by wonderprince302 and edited by Marrend. This review is a little different for two reasons: I was asked in the Review One Game Thread, and it was requested by Marrend that I make comparisons between wonderprince and Marrend's 2 versions. So, most of the sections will either be in 2 paragraphs, extremely long, or both. Okay, now that that's out of the way, I'll warn you of this: Spoilers. Be it I purposely put them there or they slip in, the little buggers won't stay out of my reviews. I DO put the plot analysis part in hide tags, though. Just a fair warning to you. I also hope you don't mind formatted reviews as I feel that everything I write needs some kind of format.
And, I'll try to keep my poker face on, but the whole time I'll secretly be laughing at 'The Hole's name.

Well? Let's get on with it! Oh wait, I'm the one writing the review...

~Gameplay~
Battles: Battles in 'The Hole' are very simple. I believe it's the default RMVX battles? Anyway, all but the final boss can be defeated using only attack in Marrend's version. Which shocked me since the final boss handed my ass to me the first time since I wasn't being very cautious. I like what you did there! Be sure to make the battles a little harder (not the final boss) and that should be a little bit better. What else kind of bugged me about the battles was that using moves wasn't even worth it! It used up your MP to heal and the main healing item of the game, Potions, were FAR superior to healing with magic. The first physical tech you get is inadequately higher than 'Attack' to be of any use than to subtract from the use of perhaps the only useful tech in the game, Charged Assault, other than Amadeux's black magic spells--which he has ALOT of unnecessary spells. Though, I do like being able to choose what I use, it really didn't make too terribly much of a difference. (I did read the manual, though, and saw that it was to illustrate his knowledge). If anybody needed a few more abilities, it was Skar and Flora. Well, useful\interesting abilities anyway. There was a little bit of a bug, though. As Marrend said it: "the Poyo*2 fight does not work at all. I mean, the screen changes to the combat screen, but the ATB does not move". I'm a little curious as to why you didn't try to fix it. My suggestion: Try to fix it.
Also, buying armor\weapons is next to useless. Perhaps you could fix that up?

As for wonderprince's version, most everything that I saw was wong with Marrend's battlewise was wrong with his as well. Though, you didn't begin with any skills. Definitely not a good idea--I go bored very quickly. I'm not sure however, if you ever gain any skills as I couldn't finish his. I would imagine so, though.

If you'd like to bump up your score, make buying weapons\armor useful, more interesting skills\powerful, fix the broken battle, and make Amadeux skills a little more diverse(I'd call this one optional)
2\5

Exploraton: Unfortunately, there is little to no exploration in this game. There is still a big continent which was kind of a bummer. You may want to add a few extra areas fro some fun! Wonderprince's is the same, but with alot of completely useless areas.

Add a few more areas and try to add a few fun little rewards to exploring.
2.5\5

~Graphics\Mapping~
Alancia looked a little more fun in wonderpince's version (The fountain and seperately tiled bridges) while Marrend's was presented much better, but didn't keep some of the fun things. Also, I'm glad Marrend's version truncuated the map outside Skar and Flora's house. It was completely useless. There was a lot of empty, ugly space in wonderprince's version, while Marrend's was much better in that regard. I haven't seen all of wonderprince's maps, though, so maybe they're better? I wouldn't think so, but it's possible! The Hole is mainly RTP but wonderpince did customize some things with a little help from a few websites. Flora being the most notable. Pretty much a typical-looking RMVX game with a tad bit of flavor. Though, in both versions there's a weird "rock on ladder" thing in Alancia that you should really fix. it's in both versions I believe.
3.5\5
SPOILER Image!
Show 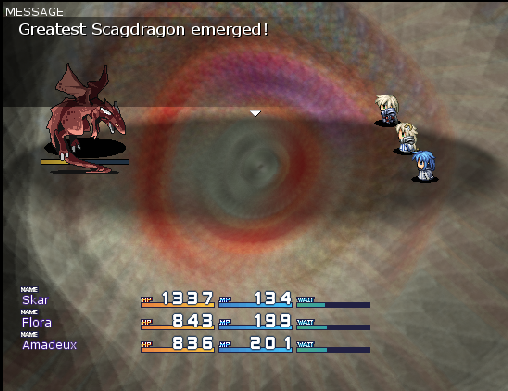 The final boss--be prepared to be mutilated a few times, only Skar can survive some of his attacks! You may want to fix him up a little. 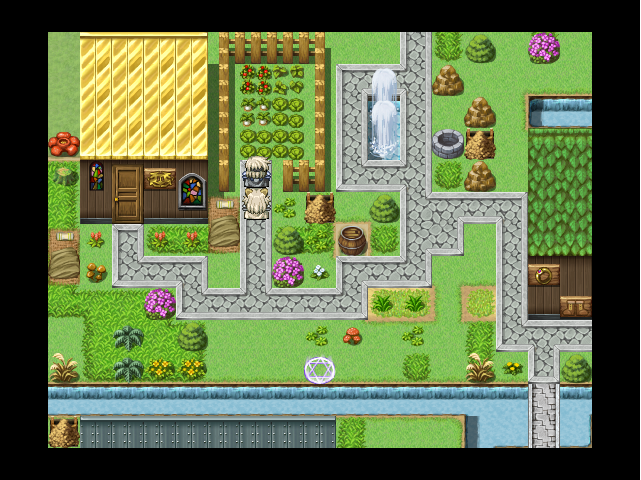 See what I mean by more "fun"? The fountain make the town seem more rememberable while in Marrend's version it's just a little puddle.
~Plot\Story~
Seems pretty average on the outside as well.
Show
So, you start out as Flora trying to wake up Skar. They talk (more like argue) then decide to go into town for some work. I wonder were you trying to make Flora seem a tad bit malicious? That's how I'D desrcibe her anyway. Anyway, they go the Mayor's house and get a job from the mayor to kill the dragon in the hedge maze. When they finally get to and kill the dragon, they comment on how easy it was. They then doubt as to why the mayor sent them concluding that he MAY have wanted them dead. I kind of shrugged that off, because I thought it was ludicrous to think anything like that. Turns out the mayor is a dragon too. I actually hadn't healed or saved before this and Flora died. So, I just spammed attack on it. You may want to fix that! Our heros swipe his pass and leave. Right outside the door for no apparent reason is Armadeux. He warns you about the scagdragons and requests your assistance when you tell him about killing one of the scagdragons. They get to the King's place to ask the King for help in finding the last 2 dragons. That's when the heros say they actually killed two dragons to Aramdeux and suddenly... the king turns into a dragon! I would be okay with this IF there had been foreshadowing of this, but there was none that I saw! The heroe kick the dragons butt and Armadeux tells them about needing to seal "the hole" and Skar mentions that they could help--not the most nonchalant character ever. Armaseux agrees and they go off on a ship with some nice monologue.

My main problem with the story is the lack of the awesome backstory that wasn't implemented. Perhaps you could put it in?
~Prelude~
This game has so much potential--implement that bacstory fix up your errors, give a little polish, and it'll be great! If you fix things, simply notify me and I'll be sure to edit my review\rating accoringly.
2.5\5

As Marrend said it: "the Poyo*2 fight does not work at all. I mean, the screen changes to the combat screen, but the ATB does not move". I'm a little curious as to why you didn't try to fix it. My suggestion: Try to fix it.

If I knew why this specific fight breaks the game, or how it breaks it, I would have fixed this issue. However, I have no ideas of where to even start. Funnily enough, I don't think this issue necessarily persists in wonderprince's verison, though it might not even have that fight. Anyway, maybe it's somehow linked to the the random number generator? Yeah, no clue how to fix this.

If you'd like to bump up your score, make buying weapons\armor useful, more interesting skills\powerful, fix the broken battle, and make Amadeux skills a little more diverse(I'd call this one optional)

If I recall, the skills in my version of this game were a direct copy-paste from Matsumori Days. Call me lazy, but I'm 99.998% sure that wonderprince used the default skill list (Which, arguably, would be even more lazy), and I really didn't want to waste time thinking up stuff from scratch. As for the other things you mentioned, I suppose, if I ever have the time/inclination to look at this again, I could see what I can do there.

You may want to add a few extra areas fro some fun!

Optional areas are an option. Also, bad puns are bad.

How does MIDI versions of "Passing Through the Forest" from Threads of Fate and "Blinded by Light" from Final Fantasy XIII constitute as RTP? Just being curious, here.

My main problem with the story is the lack of the awesome backstory that wasn't implemented. Perhaps you could put it in?

Not to sound facetious, but whose backstory? The one wonderprince put onto the game page never really comes into play in his version. Upon noticing that, I essentially ignored it, and went my own way. I might have taken some direction from the original game and flavored it to my own personal tastes, though.

As an aside, what did you think of the banter between Skar and Flora? I'd like to think they have more personality (Or, at least, recall memories of Grandia.) in my version than wonderprince's, but there isn't really any mention of that in this review.


*Edit: Yeah, wonderprince was 9 when he made this, and I haven't seen a post from him here since, um, a while. He might have just up and left.
Gourd_Clae

Close
03/15/2012 11:17 PM
Actually, I rather enjoyed the banter, and laughed several times. Especially when Flora slashed Skar to wake him up in the beginning. And even more when going back, Skar asks if he should risk sleeping.

About the music thing: I'm not the best at remembering song names, or which games they appear in. I always loathe that part and try to write as minimally as possible, but keep it in there in case I like the game's soundtrack (That category pretty much gets the shaft) I'll be sure to fix that. I'm glad you liked my pun review!
Marrend

About the msuci thing: I'm not the best at remembering song names, or which games they appear in.

This is why there's a BGM directory. Though, I must admit, I may have truncated the game names. But the song titles were not!
Gourd_Clae