Prepare for action, get ready for the game.

I have to start by saying I don't like pink (the colour not the artist) actually I loathe it, detest it, abhor it and this game is covered with it. It drips like calamine lotion from every map, dialogue box, screen and almost every item, it's everywhere. There is even a pink ninja. I mean really he'd be laughed out of ninja academy. It's ubiquitous and eye-searing and yet I didn't dislike this game, I actually quite liked this game. For a while I was confused by why and then I remembered, in the world inside my head pink is acceptable in two instances, and two only. In flowers and in the wardrobes of cute blonde children. This game is all about flowers, yes quite a few of them pink, and our protagonist is indeed cute and blonde, though she is no longer a child, if her dreams are any indication. 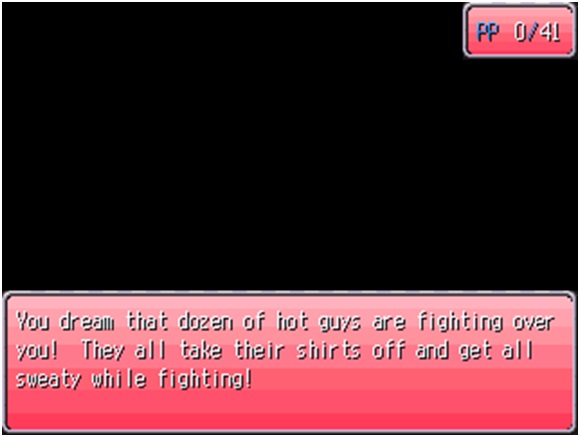 Though now I'm getting a homoerotic vibe...also 'dozens'.

So my aversion to pink being explained away by the game falling squarely in one of the two acceptable uses for the colour and border-lining on the other I found a pair of old tinted glasses, not rose of course, and proceeded.

Flower bubble game is on the surface pretty much encapsulated in the title, there are flowers, and Ginny, the cute blonde girl of the not so innocent dreams picks them. If you get tired, and you will because picking flowers is tiring work, you go and blow some bubbles which reinvigorates you to go and pick some more flowers. Flowers regenerate over a number of days while you sleep so relying on bubbles only isn't the best strategy, as you'll soon run out of available blooms. Pick a quadrant of the map and deflower it, using bubbles when necessary until it's all flowered out and then head home. Grab some sleep and then pick another quadrant to harvest, it will give the flowers time to regrow between picking sessions, also if you don't sleep you won't get access to Ginny's at times colourful dreams. 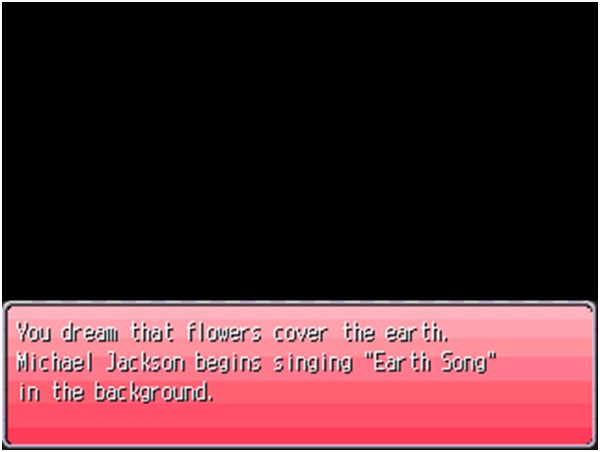 Picking flowers nets you both experience and the flower itself which can then be sold for gold. The amount of pick points increases with each flower variety but so does the rewards, small flowers cost one PP and give you one gold, large flowers cost three and net you six gold back, cave flowers it's two PP with a return of 15 gold which is the best in terms of ROI and lastly water flowers cost five PP and get you 25 gold in return. It's really that simple. Except it isn't. You see a giant, monstrous flower has grown up in front of the bandstand, preventing Rachel the songwriter and her absentee band members from practising and since you have been blessed with the awesome flower picking skill it's up to you to pick that sucker. Only problem being it needs a strength of 50 pick points to remove it and you've only got 25 before you have to sleep or blow bubbles. Luckily for you copious picking of flowers increases your flower picking muscles, one imagines the flexor and extensors, to the point where you can build them up enough to take on that plant and allow the musicians to play. Though if they disturb the soundtrack of the 90's they may regret it because those pop tunes seriously augment your flower picking with the sounds of Aqua and Crispy. That's just the icing in the cake, that or the dancing flowers, I can't decide, or maybe the odd dreams that visit Ginny, the marshmallow one is probably my favourite.

Whilst you're building up enough strength to facilitate the smiting of the mutant plant, the game includes a number of quests and objectives, all of which are fuelled by your rapid defoliation of the local flora. The final objective it seems is to take over the world, so our blonde cutie isn't just a florimanic she's a megalomaniac too, and she's looking to pick up her consort via mail order. Obviously all this flower picking doesn't leave her much time to date, and anyway discounting Shining Blossom the pink Ninja everyone else in town is a girl. Weirdly I find this remarkably empowering for a young woman in a flower picking world. She's not going to let anything stand in her way of world domination. She can be anything she sets her mind to be, and have fun while doing it. 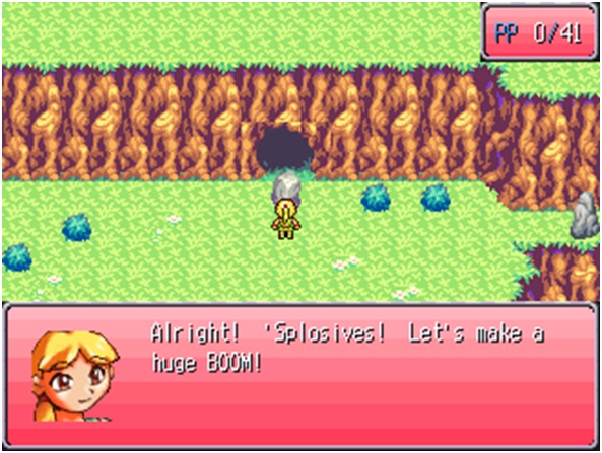 No rock will stand in the way of world domination!

Interaction with the two major NPC's in the game, Hikari the shopkeeper and Rachel the songwriter is imperative. Without their input you won't be able to achieve world domination, or actually ascendance, but in order to get it you'll have to talk to them every day when you've finished flower picking, in a variety of outfits for different interactions. Naked seems to work the best for some reason and does have some of the funnier dialogue attached, but however you style yourself it will take around 20 days to reach the point where you, Hikari and Jesse your mail order boyfriend can work together to reach the end game, and Ginny's rightful place as a bubble-goddess.

Flower Picking Game has a very very high silly quotient, but then anyone who plays a game with that name should have an idea of what they are getting into from the title, not to mention Crispy's Bubble Dancer as the title theme, so that's hardly surprising. The gameplay is exclusively picking flowers, rest or bubble; pick more flowers so the risk of boredom is remarkably high. However LockeZ has managed to assuage that somewhat in the quests available that open up greater areas of the map to explore and deflower, new outfits to wear which in turn have an effect on your ability to pick and some quite fun items that keep the game play interesting enough to see you through to the end. Actually who am I kidding it's the soundtrack; the pure eurodance is simultaneously nauseating and addictive. 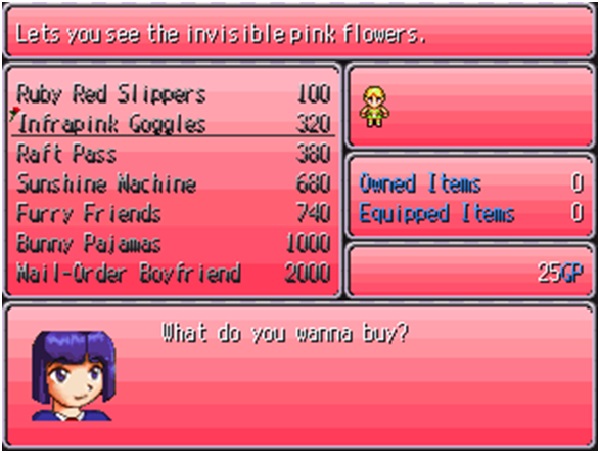 
All in all Flower Picking Game is a bizarre little adventure, brought back from obscurity by the Revive the Dead event. Like most of the games in that event it has its flaws, otherwise it would never have been abandoned in the first place but LockeZ has done a good job of releasing something which whilst not deep on any level is playable, and for anyone going into it in the right frame of mind, it's not a bad way to waste an hour or so. But be warned it seems this game is the confirmed cause of the end of at least one relationship, so you may want to play this one without the input of any significant other(s). Also I cannot recommend tinted glasses highly enough; they really do help cut down the pink saturation levels and prevent haemolacria.