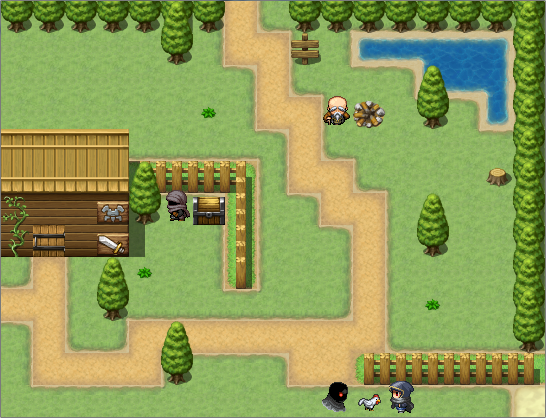 Why did the chicken cross the road? To block you from getting to the other side.

Right at the first screen of the game I got stuck. I'm the hooded character at the bottom right corner, and a wandering chicken somehow got down to where I am. At the same time, I walked forward and a ghost appears smack dab behind the chicken, causing the chicken to not only get stuck, but block me from ever starting the first line of dialogue in the game as well. 2 minutes into the game and I already had to restart.

That first image sets the quality standard for the rest of the game. Koli's Sorrow is also the Player's Sorrow as the game is riddled with bugs, sloppy programming, and other bits of surprisingly unconventional RPGMaker game design.

The graphics in this game is all RTP, but it does something I've never seen in any other RPGMaker game before. Check out the image below. 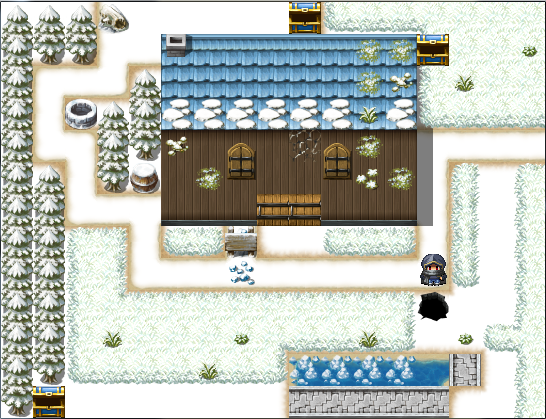 How would you get that chest on the far right? (Tall grasses are impassable)

That's right, intentionally confusing tileset passability. You literally walk into the cabin wall through the grasses and open the chest from the roof. The chest contained a fire-enchanted sword for the ice-based boss inside the building, so it's an A-grade loot. Another thing you have to accustom yourself to is that all tall grasses in this game are impassable. Per the image above, you must follow the path from the right side down and across the bridge to get the chest on the bottom left corner.

I thought this was ingeniously hilarious. This was one of many unconventional designs I mentioned earlier.

Gameplay is on the easy side. Skills/spells are clearly unbalanced, and you are better off using the best one all of the time. There is almost no danger of running out of mana, but your healing spell is pretty weak, so get potions. I breezed through 60% of the game until I met the first difficult boss. A medusa that spammed group paralysis followed by group poison while reminding me to DIE every once in a while, to the ire of my party members. The developer loves bosses, so much so that they made an area dedicated specifically to fighting old bosses without limit. They also usually made sure that 3 things are present in front of every boss battle: a bear telling you hints about how to fight the boss, a waypoint back to town, and chests with better gear. Granted, the gear sometimes wasn't equippable by anyone in the party, but it's free stuff nonetheless.

Dialogue vacillates between funny and boring. Everyone usually speaks in simple sentences, but everyone is genre savvy as well. It's also extremely random. 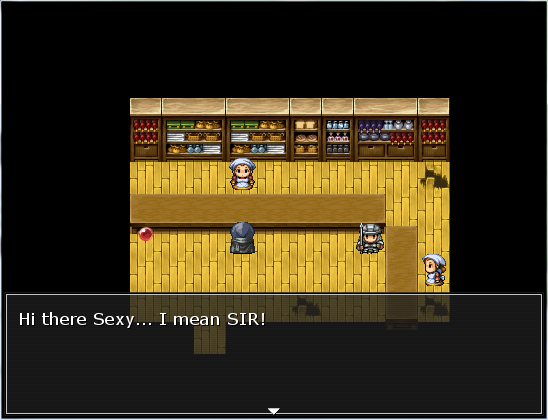 The first building in the game and the shopkeeper is already hitting on you.

For example, early in the game a miner complained about a boss blocking the mines, but after we defeated it and talk to him again, he thanks us and walks into the mine. Talking to him again while he's inside the mine gives "I'm busy, piss off."

Or how about this one: 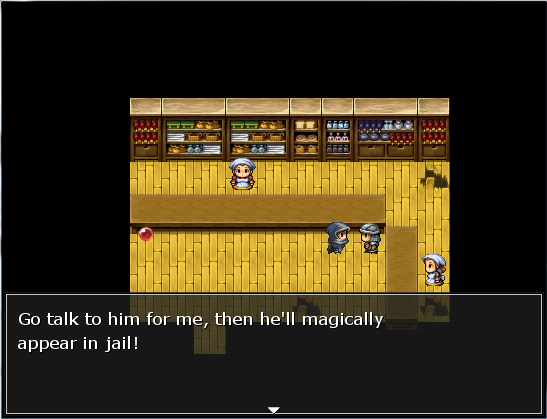 Magic still is the ultimate excuse for lazy developers.

The sad thing is, that guy never went to jail anyway, due to what I assumed was yet another bug. But now you know what kind of dialogue to expect in this game. Story is pretty simplistic, you walk around the place fighting boss after boss for some reason or another, however one party member abruptly left the party holding a grudge against us about something that happened like 3 bosses ago. Luckily he is soon replaced by another person who clearly should have joined the party earlier, but didn't.

Unfortunately, due to the sheer number of bugs in this game, I got to the basement of a building filled with ghosts and couldn't advance any farther. I assumed it is a bug (given how many there are in the game). Normally I'd give a bug-ridden beginner's game a 2, but this one was mildly interesting with it's 'creativity' in the game design and funny dialogue. I sincerely wanted to complete this game.