MANOS: The Hands of Fate

Really better than the movie!

MANOS: The Hands of Fate is an RPG Maker VX game made in 2010 for a particular event that had a simple but challenging aim: making a game inspired by an existing horror movie.

MANOS: The Hands of Fate is a movie by Harold P Warren made in 1966 that I had the luck to watch in 2010 thanks to some guys from a website that subbed old horror movies. Together with Plan 9 From Outer Space this is considered one of the worst movies, anyway the problem wasn't just due to the "home made" quality, but also for some particularly odd choices like filming the outdoor scenes at night in the desert using powerful lights that attracted lots of insects (using a studio would have been cheaper and with better results) or presenting a couple that spend and entire day kissing inside a car (and they are stopped by police twice!), and they have absolutely NO relevance for what concerns the plot! (I've read that the actress broke her leg so she had to sit. Still... WHY?)
Anyway watch that movie, it's beyond the shabbiness, and so bad it's so good! It became a cult movie and even spawned a 2018 sequel with the return of the Master. 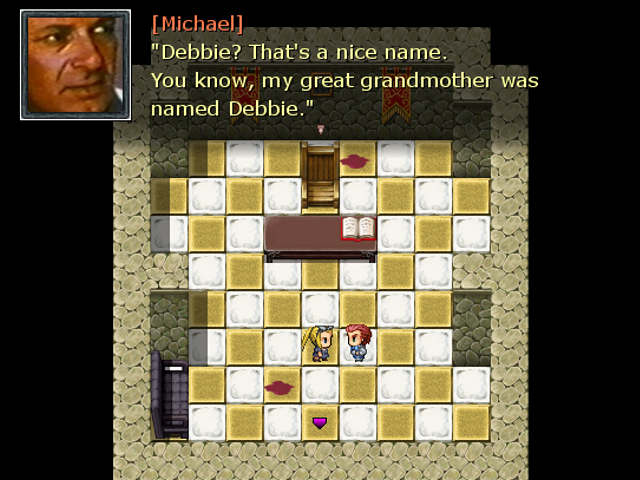 Is it wrong to pick up a girl in a dungeon???

Now, the 2010 RPG Maker VX game made by Yeaster (because THERE WAS also a 2012 platform) begins with a similar premise: an american couple, Michael Downing and Margaret Peterson, seek shelter inside a lone Motel on the side of the road (in the original they had also a daughter and a dog). Unfortunately for them this is the beginning of a real nightmare for the couple!
The game is luckily just loosely based on the movie, otherwise it would be pretty boring (not to mention the ending! Watch it!), so expect lots of monsters and combat, while there is still the presence of some important characters like Torgo (that technically in the movie is a satyr, but the costume was so badly made that's impossible to understand just watching it!), the Slave of Manos, the maidens, etc...

The interesting thing is that n the beginning we can choose to play as Michael (that's a physical characters, strong with weapons) or Margaret (that's more magically inclined... well not in the movie, but this makes all more interesting) and this also means that many events that happen during the story will play slightly differently. Cool idea!

Ok so the game is basically a horror dungeon delving adventure in which the protagonist has to explore different levels of the underground, fighting various opponents in random encounters and bosses that appear at the end of each level.
Grinding is easy since you get easily a ton of exp and gold especially when fighting bosses, and not really necessary until the final parts, but the most important thing is the equipment: with the right protections, immunities, and weapon you can easily win every encounter (some weapons are bought and others are found), unfortunately the perfect setup isn't something you may know before triggering the encounter (even if you can clearly escape from random encounters and adjust your equipment) without reading the walkthrough so it's just a bit a matter of luck. I mean you *can* still win if you have equipped a weapon that works well against that enemy but not the correct protective item, or the opposite... but if you chose poorly both weapon and protection, it's better reloading the game since you will be defenseless against the effects of stun and/or sleep, anyway it's true that combat encounters are VERY fast. And I liked that! 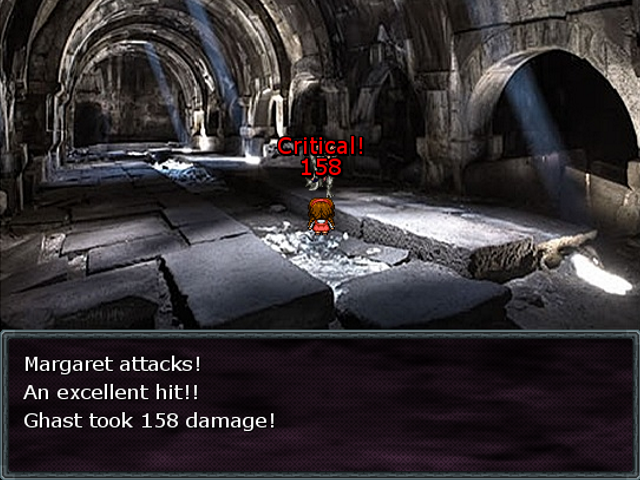 Michael may be stronger, but Margaret doesn't fear ghasts and other abominations and is more than happy to beat them!

Did I say "reloading"? Yes, because you can save but only in particular moments, like when the game asks you or when inside the "peace rooms" with the fountain, the blue orb and the grim reaper... a gloomy skeletal guy that act as a merchant, not to mention that you are automatically completely healed when you enter the room.
And for what I experienced, this is the only way to resurrect fallen party members, because this IS a solo adventure but you may have some company, even if you will still control just your main character. And yes, there are no items to resurrect those who die, except for the rooms of the grim reaper... uh it's a bit odd, but make sense, I guess!

Graphically the game uses RTPs, monsters from some sources I didn't recognized except in some cases (the maidens are sprites of the various forms of Maria Tobari and the Master is Shijima Ryō, both from Psycho Dream, a 1992 SNES game), while the portraits come directly from the original movie (well these are the same characters of the movie) and the backgrounds of the battles... uhm from somewhere else! Mapping is ok (except when the writings overlap the stairs making difficult to read these parts!), and dungeon levels are mercifully both shorts and different: we've a prison, tunnels, a crypt, and so on, and this short game also includes a very simple puzzle. 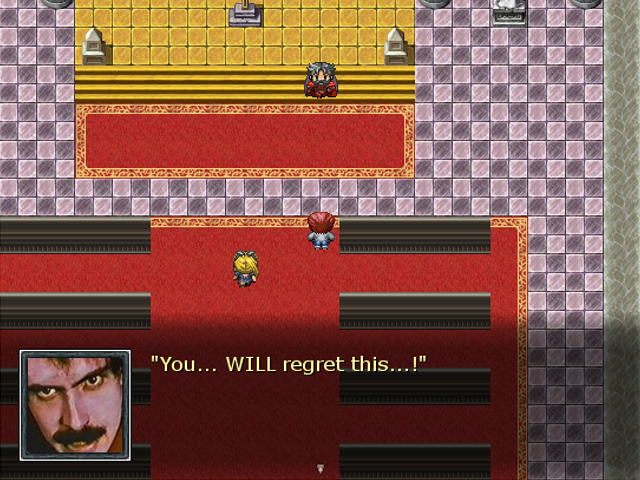 Final Verdict
This was MANOS: The Hands of Fate, a short horror dungeon crawler that hasn't the usual fantasy setting, but it's clearly a mystery horror game, and many features and gimmicks enforces this sensation (the lone protagonist, the horrible creatures, the creepy setting). I liked how combat is fast and furious, a bit less the fact that if you have not equipped the correct items you could not use the skills you need most (because skills depends on the items, not on the character level! Also better swords/axes/spears give you more abilities including those of the weaker versions that you can sell. Luther's spear that can blind, silence and confuse the enemies was my endgame weapon). Anyway for an event game this is a pretty competently made, includes a NewGame+ mode, and the fact it was based on the movie with the same name it's really a plus!

Close
12/25/2021 08:23 PM
Thanks for the review! I have a confession to make... I never actually watched this movie lol at most, like, maybe the first 10 minutes.
TheRpgmakerAddict

author=Yeaster
Thanks for the review! I have a confession to make... I never actually watched this movie lol at most, like, maybe the first 10 minutes.

Ahaha it's hilariously bad, but what I liked about the end was that:


Show
in the movie Torgo escapes from the Master after this one makes his hand explode (don't remember why!), Michael takes Margaret and daughter and finds the Master, then shoots him six times to kill him and escape. BUT things are strange, we see the family in front of an open door, then the Master in front of the same door (like same place in two different moments), then Michael that shoots at the door in front of him, then the Master that grins.
The day after Michael replaces Torgo as the owner of the motel and the Master takes both Margaret and her daughter as wives/maidens! The Master apparently now controls their minds, so... he won!


I mean that shocked me at the time.
The game... not so much anyway was a good entry for a contest!
Pages: 1